Breathtaking nature, exceptional legacy of the Silk Road and a bit of  Soviet architecture. This is how I could describe our three weeks long trip in Kyrgyzstan, Kazakhstan and Uzbekistan.

From exploring soviet Bishkek, to swimming in the second biggest salt lake in the world Issyk-Kul (while having incredible views of snowy peaks), driving an old Russian war vehicle for a visit of the amazing Altyn Arashan valley, where we tried the natural hot springs, and experiencing sleeping in a yurt camp. Exploring the biggest and modern Kazakh city of Almaty. Catching a train to be amazed by the incredibly beautiful architecture of colourful madrasahs and mosques of Uzbekistan. And finishing the trip in Tashkent, which among other sites has gorgeous metro stations, where just a year ago it was prohibited to take photos. All this while trying lots of delicious local food and visiting bazaars.

How did we travel around?

We hired a driver in Kyrgyzstan. Due to a limited time of our vacation it would be hard to visit all the destinations with public transport. There are lot of shared vans, however, they drive from city to city and go when they are full. They also don’t drive to tourist attractions. Then we took a shared minivan to get from Bishkek, Kyrgyzstan, to Almaty, Kazakhstan. And we flew from Almaty to Urgench (the nearest airport to Khiva) in Uzbekistan, with a layover in Tashkent. In Uzbekistan we travelled between cities by train. 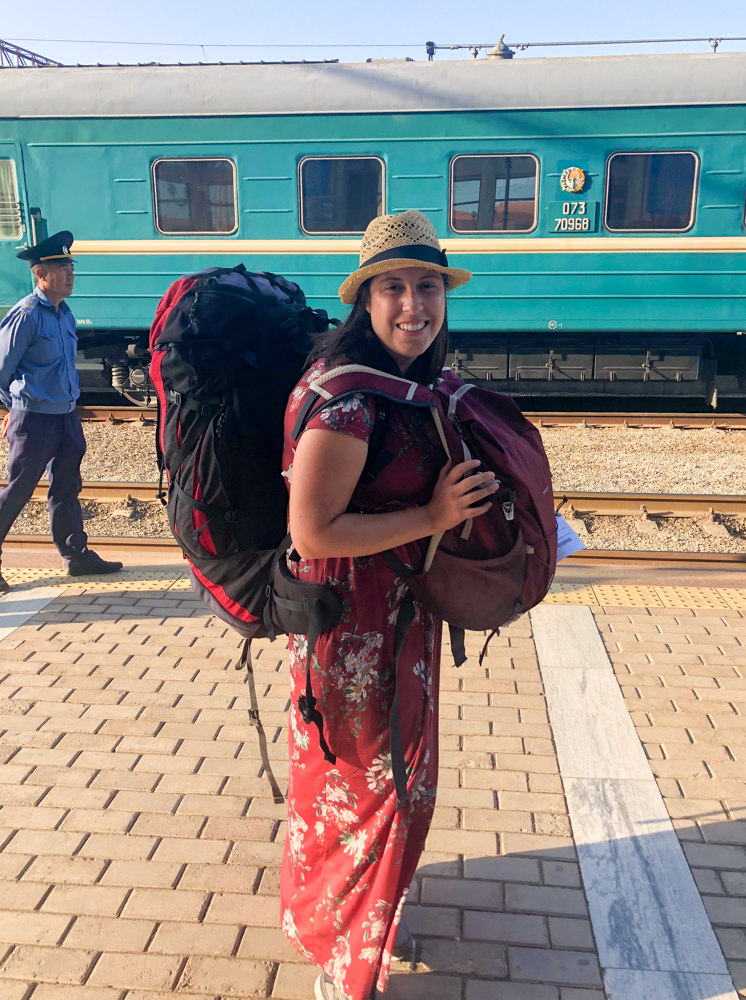 What did we eat?

Plov, manti, lagman and shis kebab were regularly on our menu. For detailed guide on what to eat and drink in these Central Asian countries click here. 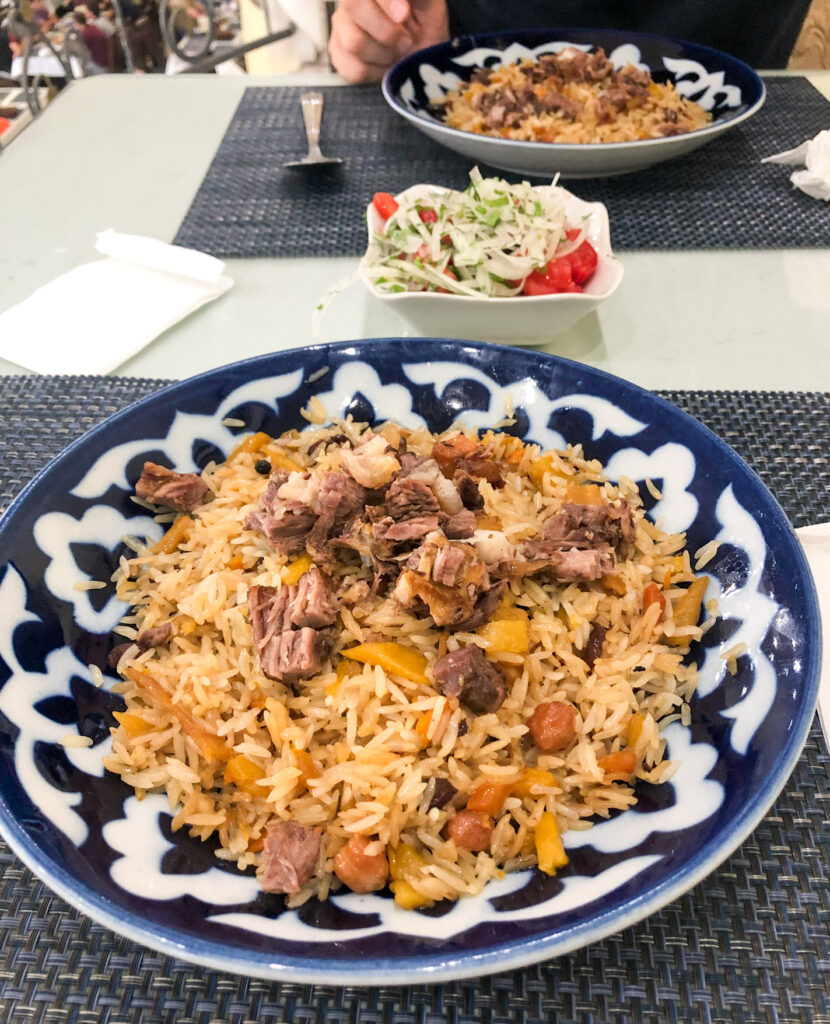 Bishkek is a capital many have not even heard of and also on the internet there is not that much information about it. So, to be honest, we did not know what exactly to expect. But Bishkek persuaded us with its green streets, flowery squares and many parks. We admired the Soviet architecture of the main buildings in the city and were amazed by the colours, smells and tastes of the big Osh Bazaar. It’s true that not all the streets in the city are paved, but there are also modern and hip cafes, international cuisine and first all women craft beer startup. Read more about it here.

Visiting the UNESCO World Heritage site of Burana Tower was our first stop on our way from Bishkek to Tamchy. Burana Tower is a 25 meter high minaret and the only remaining part of an ancient city of Balasagun, which was established in the 9th century. You can climb to the top of the tower and admire the views of snowy peaks and green meadows. At the site you can also see grave markers and visit a small museum. 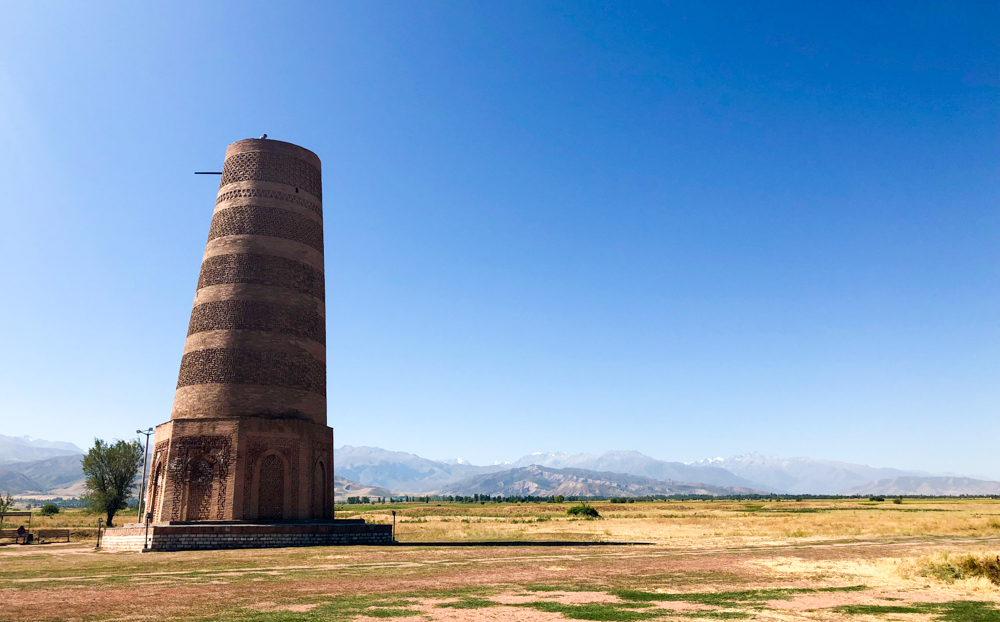 They say that the northern shore of Issyk-Kul lake, where Tamchy is situated, is Mallorca of Central Asia. It is a popular spot for local tourists, as there are nice sandy beaches and clean slightly salty water of the second largest salt lake in the world. However, the best part of Tamcy is definitely the views you have while swimming – above the lake the snowy peaks of Tian Shan mountains are rising. We also loved the local food here, as we stayed at a homestay and the owner made some really delicious food. Besides the beach, Tamchy is just a village with unpaved roads and many homestays, where mostly locals and tourist from Russia stay. 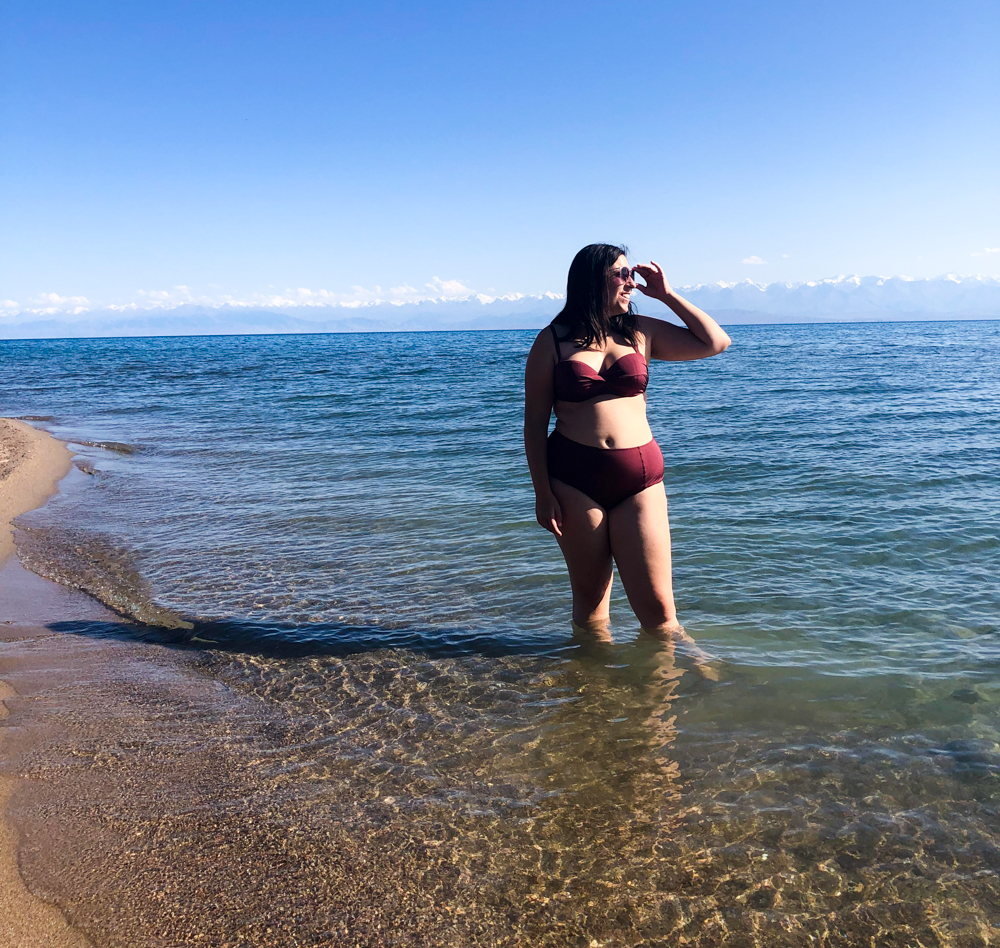 Driving from Tamchy to Karakol we stopped at the open-air petroglyphs museum near the town of Cholpon Ata. The museum has about 2000 petroglyphs dating from 800 BC to 1200AD. Among other motives they are showing people hunting animals. You can also see some interesting flora in the museum. And the whole time of your visit you will have an amazing view of the mountains and the Issyk-Kul lake.

The most popular destination in the Issyk-Kul area is definitely Karakol. The city serves as the base for hiking in the Kyrgyz mountains and it is also a popular winter destination as it has good ski slopes. A must see in Karakol are two wooden religious sites – colourful Dungan Mosque and also beautiful Holy Trinity Orthodox Church. Here are also some nice cafes and don’t miss out on souvenirs shopping in Issyk-Kul Brand Souvenir Shop. See more on what to do in Karakol here. 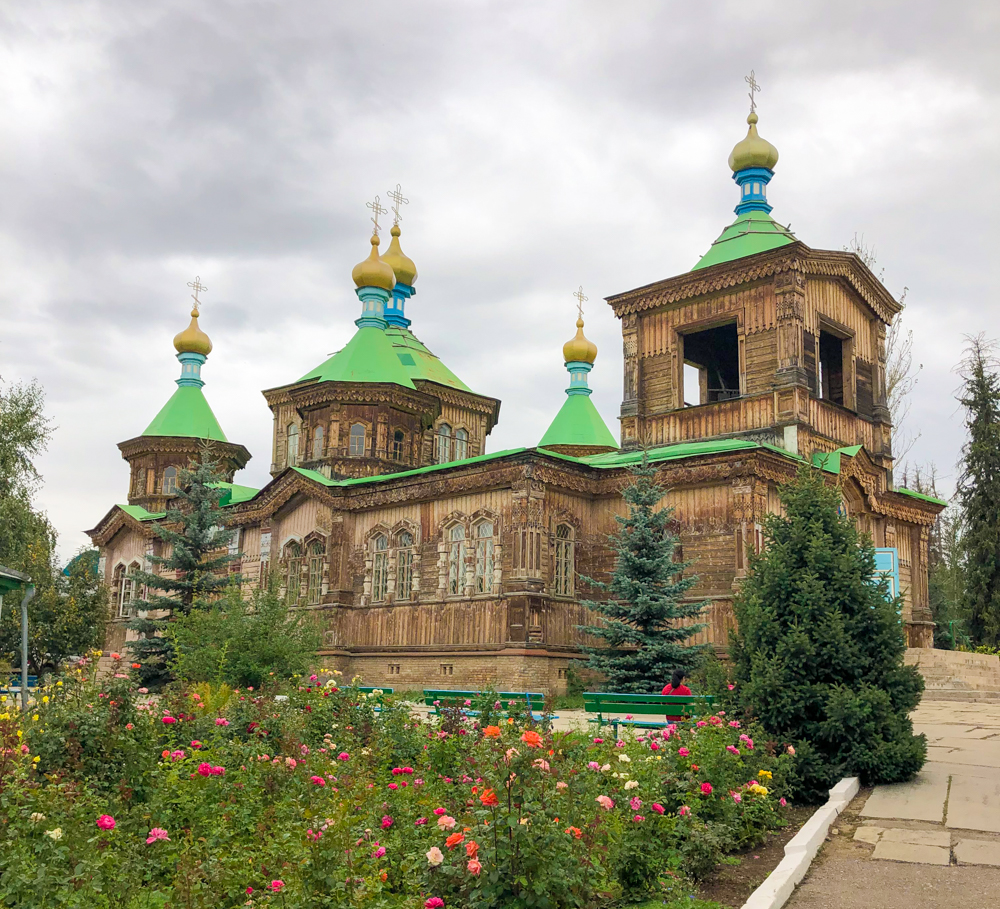 Imagine a green mountain valley, located on 2400 meters above sea, with gorgeous river, a few small yurt camps and views of snowy mountains. To add to the picturesqueness, Altyn-Arashan has three natural hot springs. Are you convinced to visit yet? You can reach the valley by foot – beware there are 20 snow leopards and some bears in the area – or driving with an old Russian military truck. The 2 hours long ride (one way) was exciting and it gave us a good shake, but it was well worth it to see this mountain beauty.

An interesting red rock formations Jeti-Ögüz are located at the Terskey Ala-Too Mountains. Their shape has a resemblance of seven bulls and there is also a legend, that further confirms their name. Not far away is another famous formation, called the “broken heart”.

These rock formations are also an entrance point for the Kok-Jayik Valley, also known as the Valley of Flowers. The drive took us along beautiful blue river and when we reached green valley we did a short hike to a nice waterfall.

Sleeping in an idyllic yurt just next to the shore of Issyk-Kul Lake, having gorgeous mountain views in the back, eating delicious food, chatting with other guests, having a beer while reading a book in an open air bar and enjoying two days without any internet. Bel’tam Yurt Camp was just amazing! They also prepared an evening show with traditional Kyrgyz music and instruments. You can read all about our stay in Bel’tam here.

Skazka or Fairytale Canyon is a valley full of colourful canyons with interesting rock formations that have all the shades of red, orange and yellow. When visiting you get a feeling you are on a different planet. You can hike up and down along the canyons and admire nature’s wonders. Find out more about the canyon here. 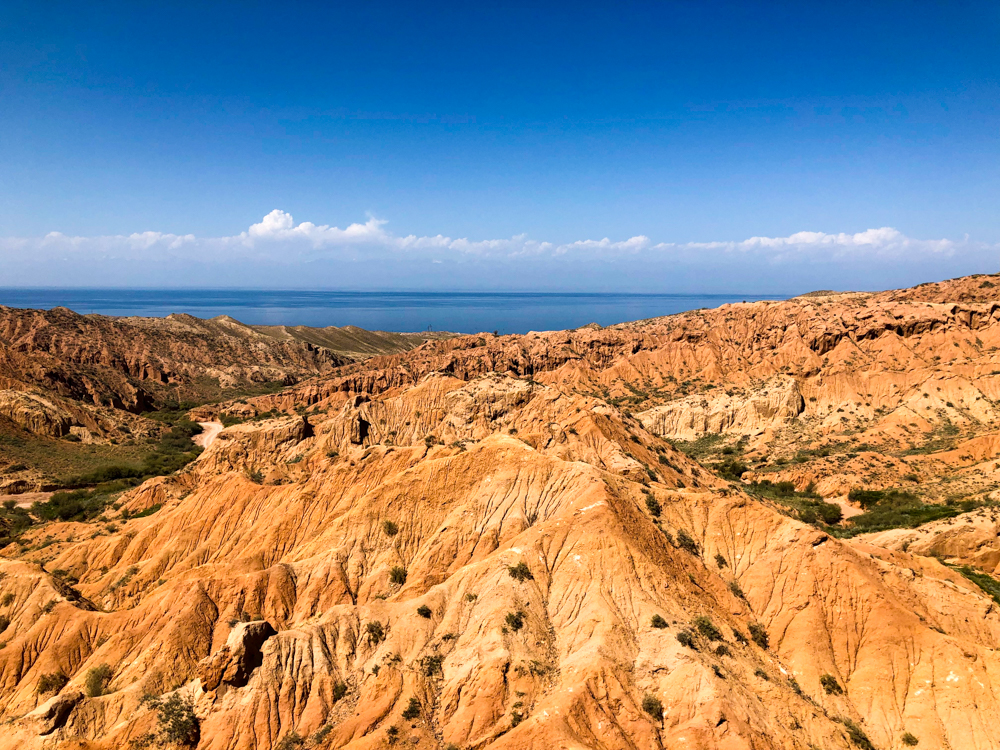 Kyzyl Tuu is a village of many yurt maker families. We visited one of the families to see the interesting process of making all the parts to assemble a yurt. 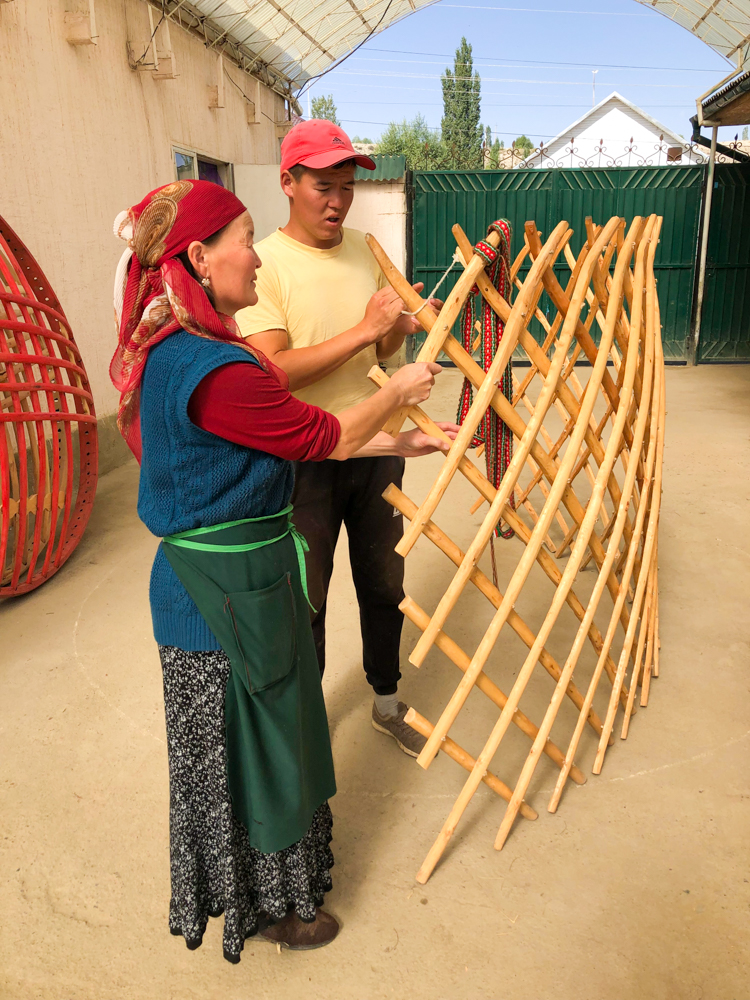 Almaty was a surprise! After remote Kyrgyzstan locations we arrived to a modern European-like city with wide and clean street, full of cafes and restaurants. And after cash-only country, in Almaty they accept credit cards everywhere. We walked past huge Soviet buildings, hopped on a funicular to visit Kok-Tobe – a popular amusement park on the top of a hill overlooking the city, admired colourful Zenkov’s Cathedral and walked the most popular shopping street Zhibek Zholny. We also learned that bazaars are closed on Mondays.

Visiting Khiva was like getting lost in the stories of One thousand and one nights. Behind the city walls you find madrasahs with beautiful tiles, colourful minarets and gorgeous palaces. From admiring Kalta Minor Minaret and hearing about its legends to the breathtaking views you get when climbing Islam Khoja Minaret or visiting unique Juma mosque. Don’t forget to stop for a cup of black tea or traditional green noodles while exploring this amazing city. To see all its sites click here.

We loved Bukhara because its city centre is full of amazing sites. From Kalon Minaret and Kalayan mosque to fortress the Arc, Bolo Haouz mosque and Chor Minor. It’s a great place for shopping, in many trading domes you can find everything from carpets to ceramics and other great souvenirs. The city is also alive in the evenings, you can’t miss on going for a beer at Lyab-i Hauz pool. There are many interesting sites outside city centre, like the Bahouddin Naqshband Complex and the Summer palace of the last emirs of Bukhara. Get your complete guide for visit to Bukhara here.

Samarkand is home to probably the most known site in Uzbekistan – the Registan. This complex consists of three beautiful madrasahs, which you also have to see at night with all the lights. There are so many sites to see in Samarkand, one of the most gorgeous are definitely Gur-e-Amir and Shah-i-Zinda. It is a big city, so there are quite some distances between the top sites. Here you can also visit the Hovrenko wine museum, where you can learn about the history of wine production in the region and try some local wines.

A capital full of interesting Soviet architecture, like the famous Hotel Uzbekistan or Chorus Bazaar, mixed with traditional sites, like Hazrati Imom Complex and the beautiful Minor mosque. But Tashkent is not only beautiful on the ground but also underground. It’s only since last year that you can take photos of its gorgeous metro stations. They are also constructing a lot of new buildings and parks.  We stumbled upon Navroz Bogi Park just a week after its opening and were happy to see some of the city from the top of the ferris wheel. A must stop is also the Plov center, where you can taste all kinds of this traditional Uzbek risotto. Click here to get to know all my favourite stops in Tashkent. 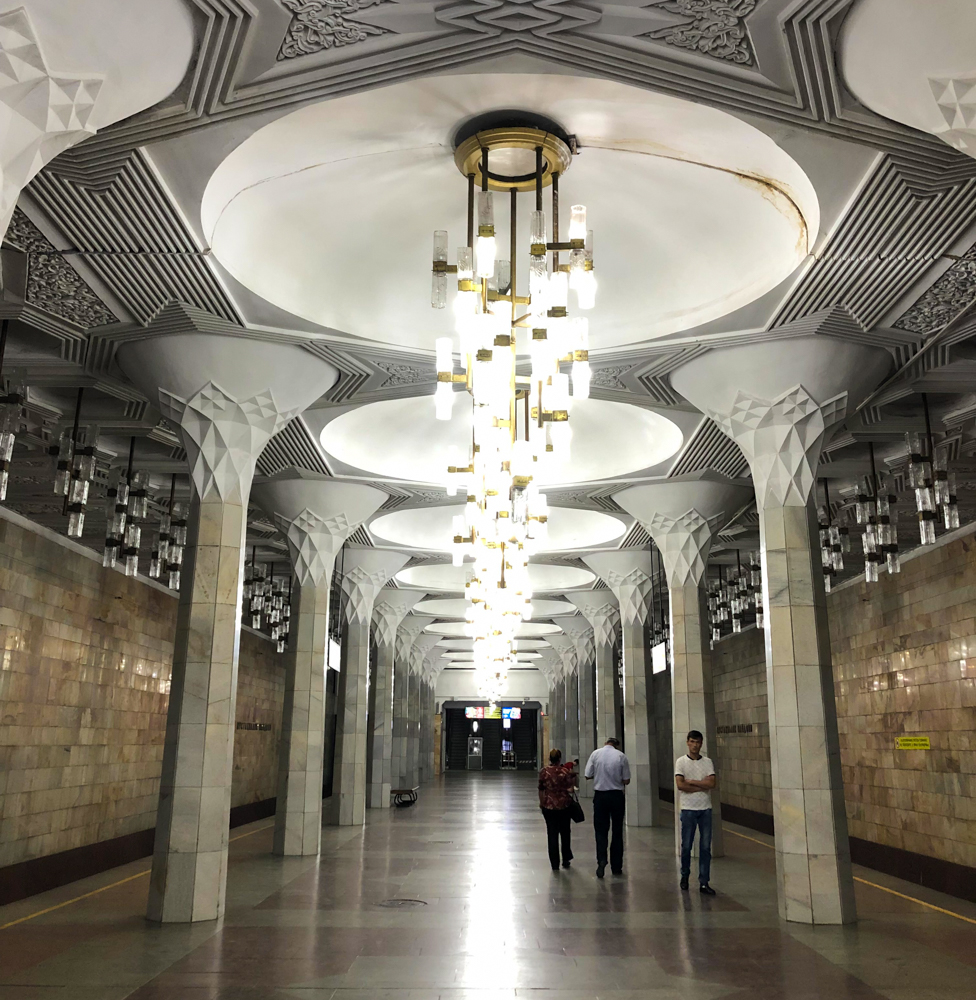 2 Replies to “Three weeks in Kyrgyzstan and Uzbekistan, with a stop in Kazakhstan”