Did you know that Lima is a culinary capital of not only Peru but the whole South America? Oh yes, it’s true. Its cuisine incorporates local ingredients and practices, like the Inca’s cuisine, with cooking traditions that were brought with immigrants from Europe, Asia and West Africa. Here you can find three of the top 50 restaurants in the world and on every corner there is a delicious restaurant offering something amazing to eat.

We spent our last day of Peru & Bolivia trip exploring Lima’s Miraflores district. It’s the richest district of Peruvian capital, stretching along Pacific coast it’s home to many hotels, expensive shops, bars and restaurants. Nevertheless, its a district you have to visit when you’re in Lima. Here you will find amazing views of the Pacific ocean, lively Parque Kennedy, historical Huaca Pucllana and lots of delicious Peruvian food. Read on for a food and top spot’s guide of Miraflores.

Our day started with a walk on Malecón, Lima’s boardwalk that stretches along the cliffs of the Pacific coast. Malecón connects many parks on the upper part of the cliffs, so it offers really nice views of the beaches and the Pacific ocean. Here you can see surfers catching the waves and parachutists catching the wind. However, Lima is also known for being a foggy city, so the views are, especially in the mornings, a bit limited. We started our exploration in the famous Parque del Amor, love’s park with the sculpture of the kissing couple, and continued north to the lighthouse Faro La Marina. When returning, we stumbled upon the cutes Crepería Beso Francés and had to have a second breakfast: crepes with Nutella, brownies, strawberries and vanilla ice cream! Yes, it was even more delicious than it sounds. We also had coffee with a view. 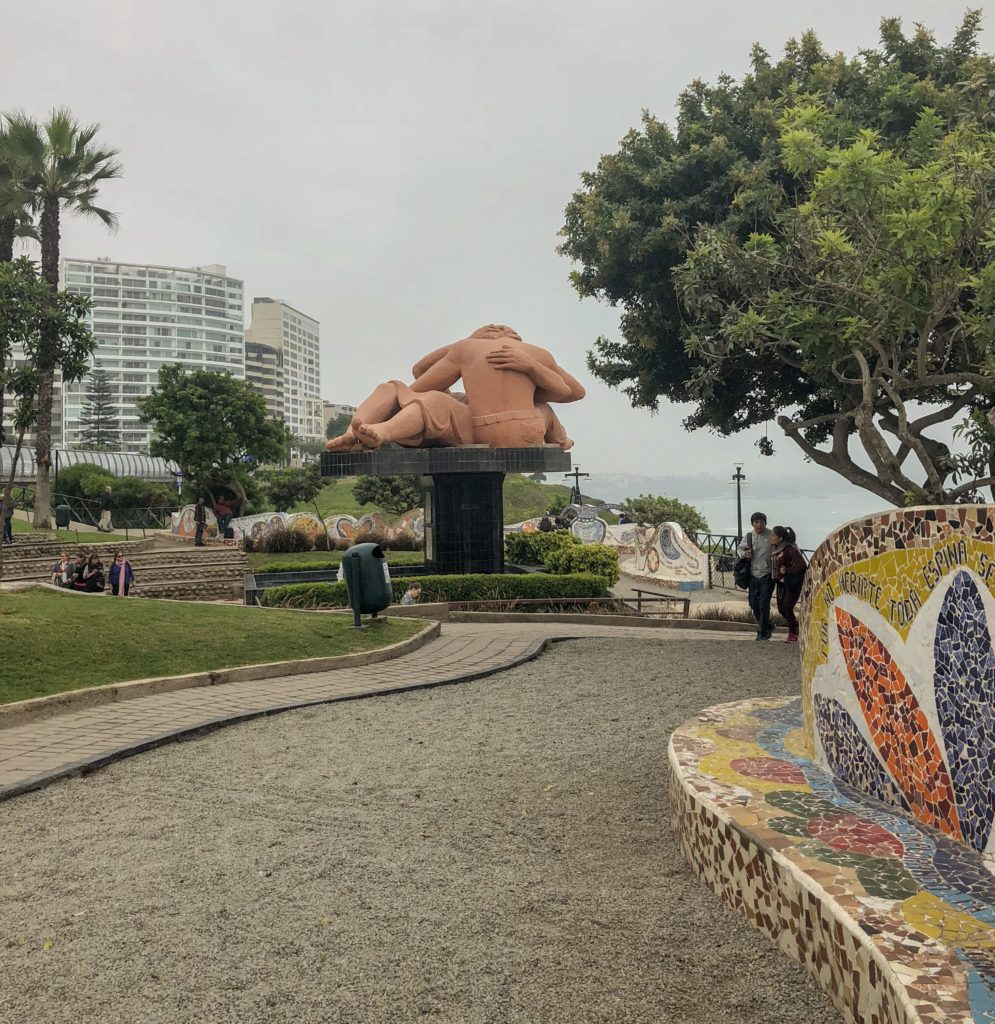 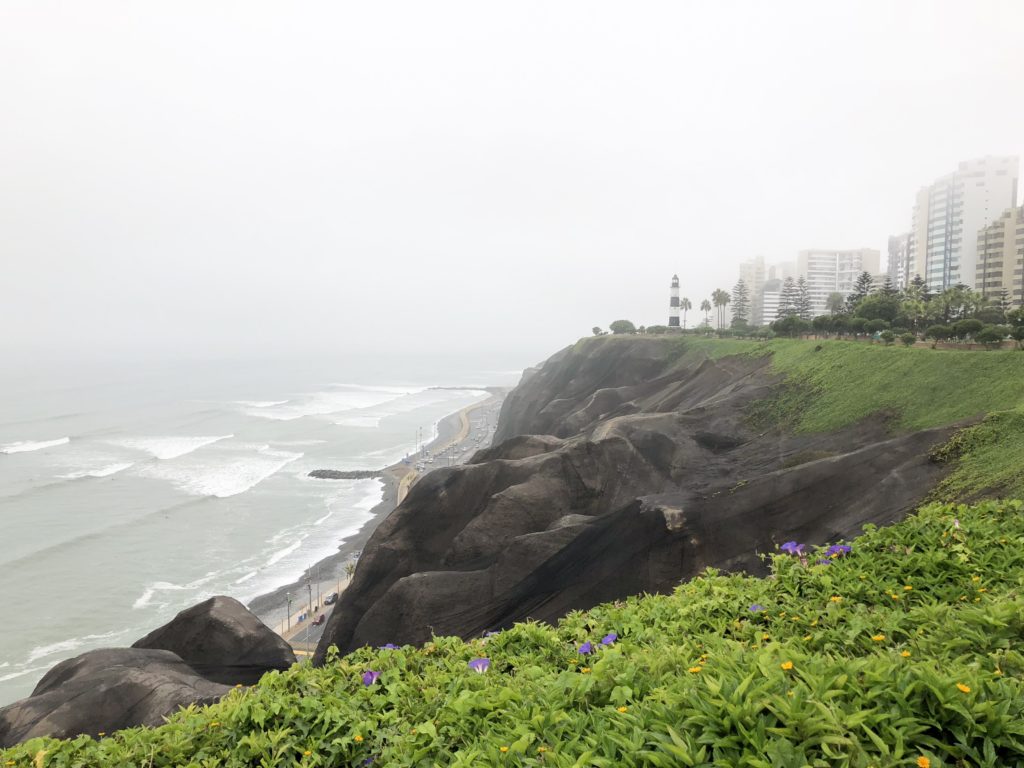 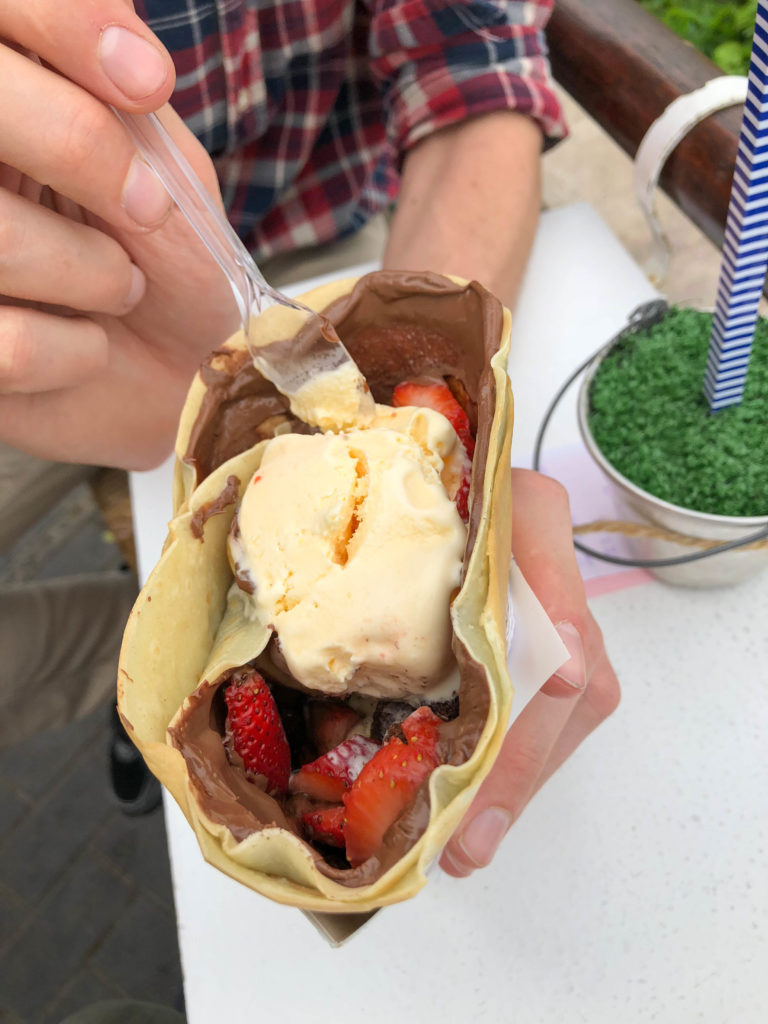 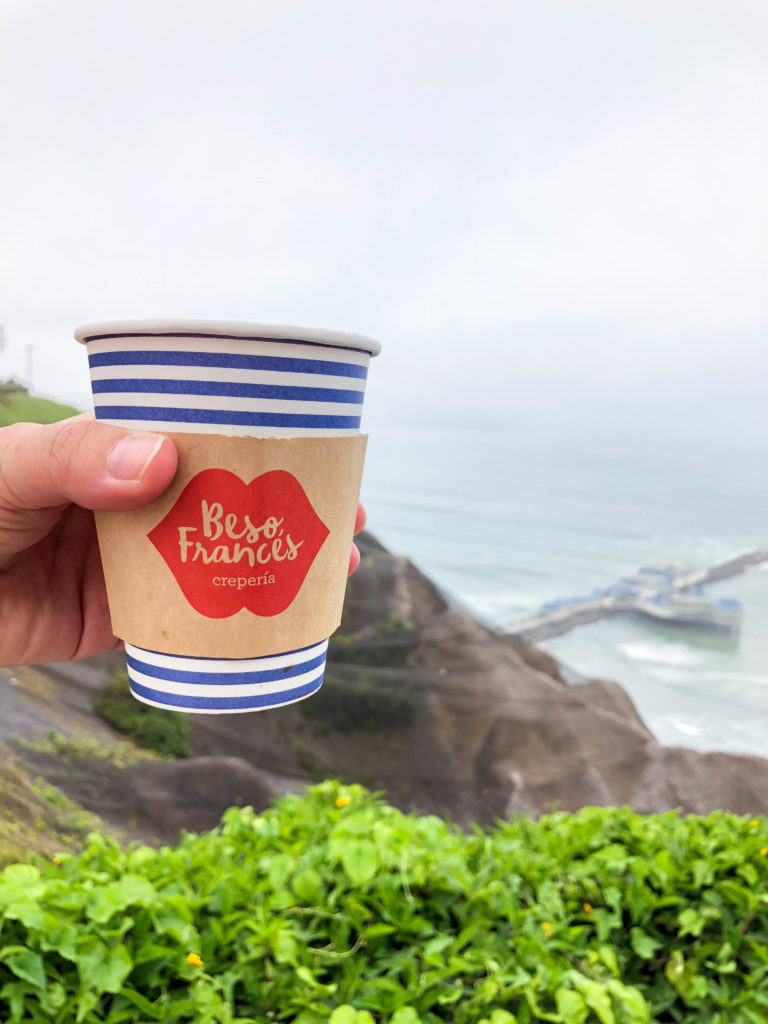 We continued our walk south to get to the Larcomar shopping centre – it may be full of designer shops but it also has some amazing views of the ocean. Here we turned away from the beach and head west to get to the Punto Azul restaurant. We knew it was good even before getting the food. There was quite a long line in front of the restaurant. We put our names on the list for getting the table. While waiting we got two traditional drinks to taste for free: chica morada (its base ingredient is purple corn) and pisco sour (alcoholic cocktail made from pisco). Love the latter! Once we got the table we order ceviche, a national Peruvian dish made of raw fish with special sauce made from citrus juices and spices. Our ceviche was accompanied with sweet potato and corn, mine also had raw sea fruits added. If you like raw fish ceviche is definitely something you have to try! 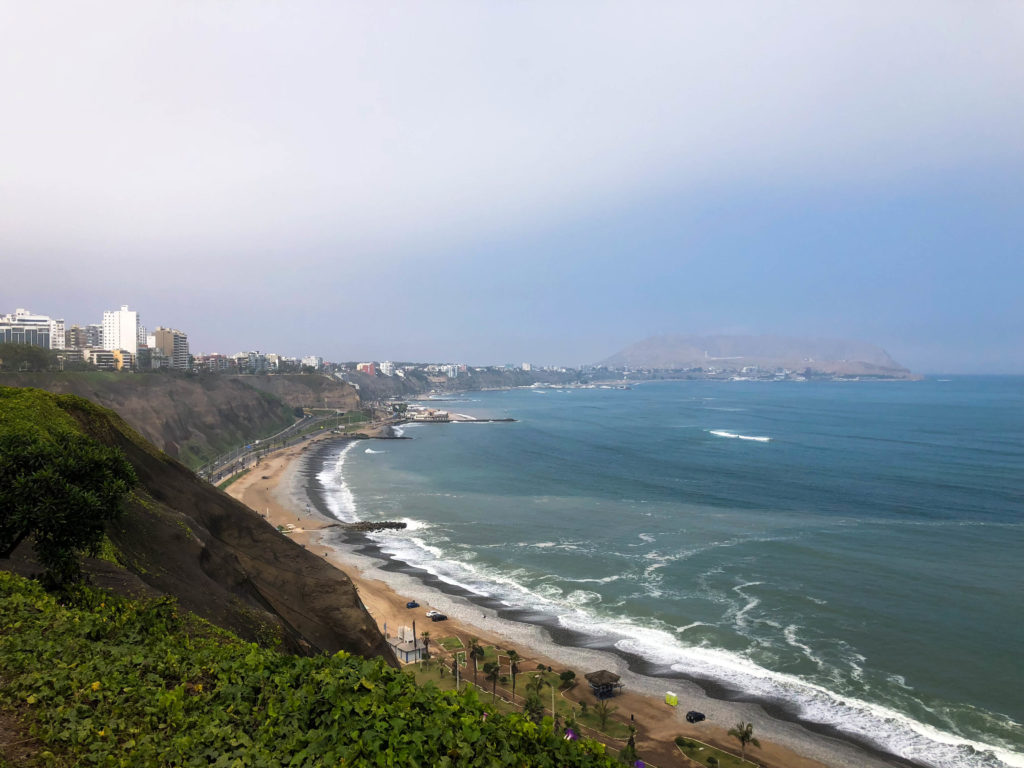 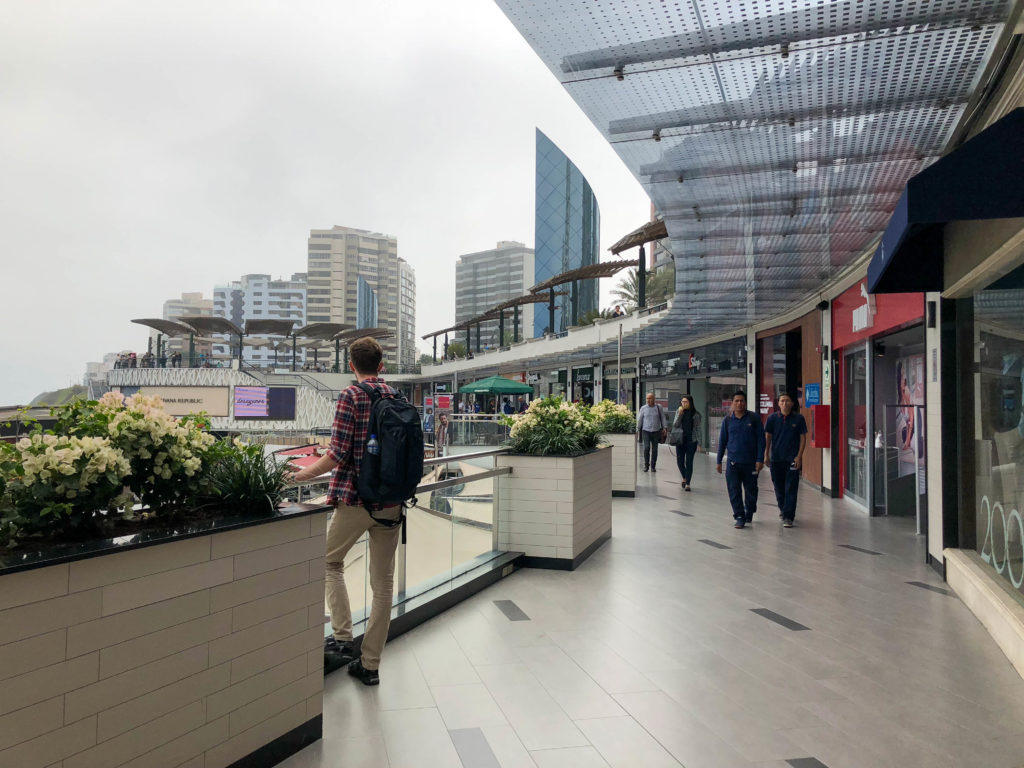 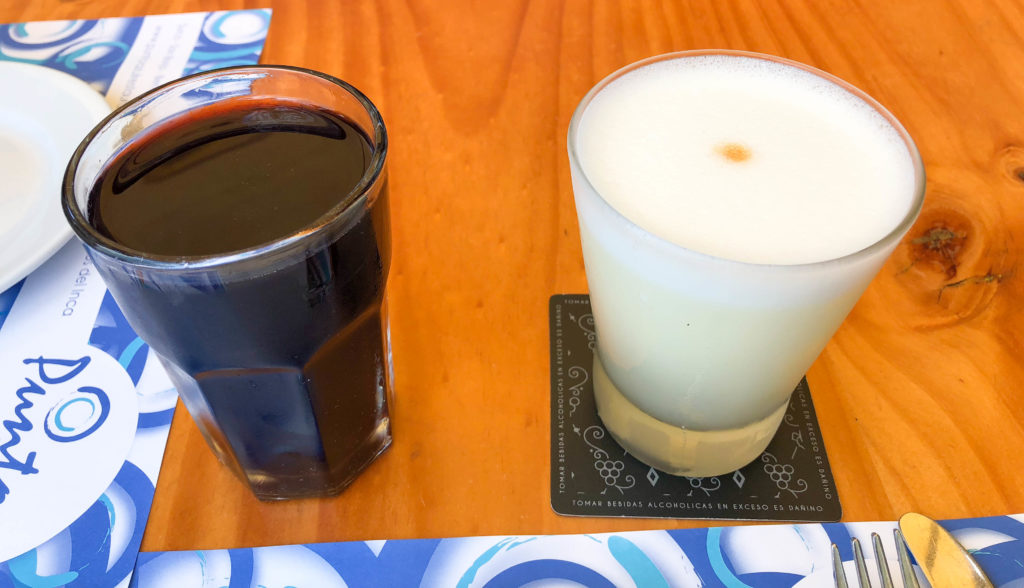 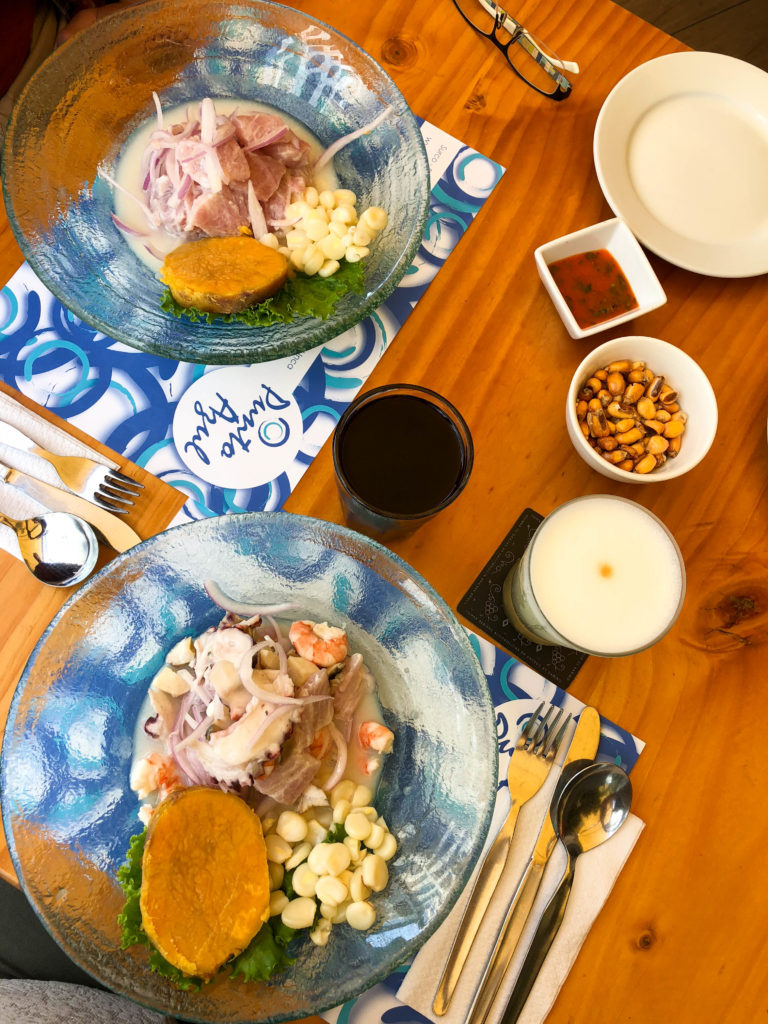 After lunch we headed south to neighboring Barranco district, but you can easily stay in Miraflores and see another must see part Huaca Pucllana (which we already saw at the beginning of our trip). This incredible archeological site is home to the sacred pyramids, which where built by the Lima people between the years of 200 AD and 700 AD. It is really impressive to see such site in the middle of the most developed part of the city. Take a guided tour and you will learn lots of interesting facts about the history of the place and Lima. After historical exploration you definitely deserve a traditional snack – kind of baked corn called cancha chullpi and popular drink Inca Cola. I really liked the corn snack (even bought it for home), but Inca Cola is a little harder to swallow, it tastes like bubblegum, although with time you kind of start liking it. Have you ever heard of Inca Cola? 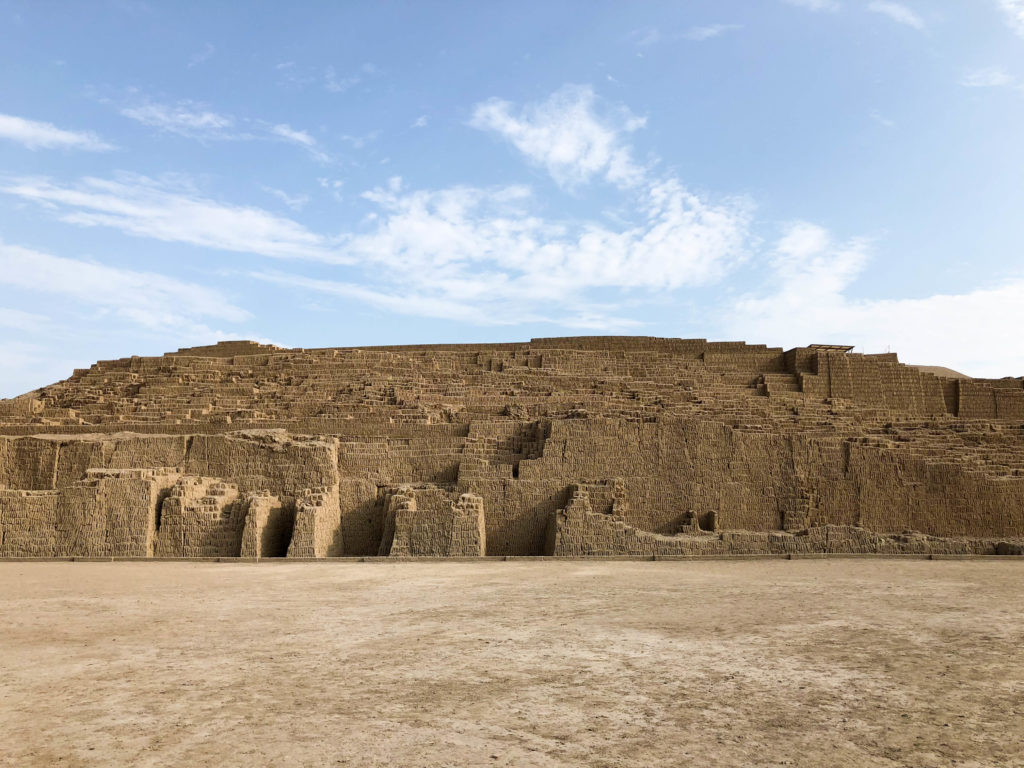 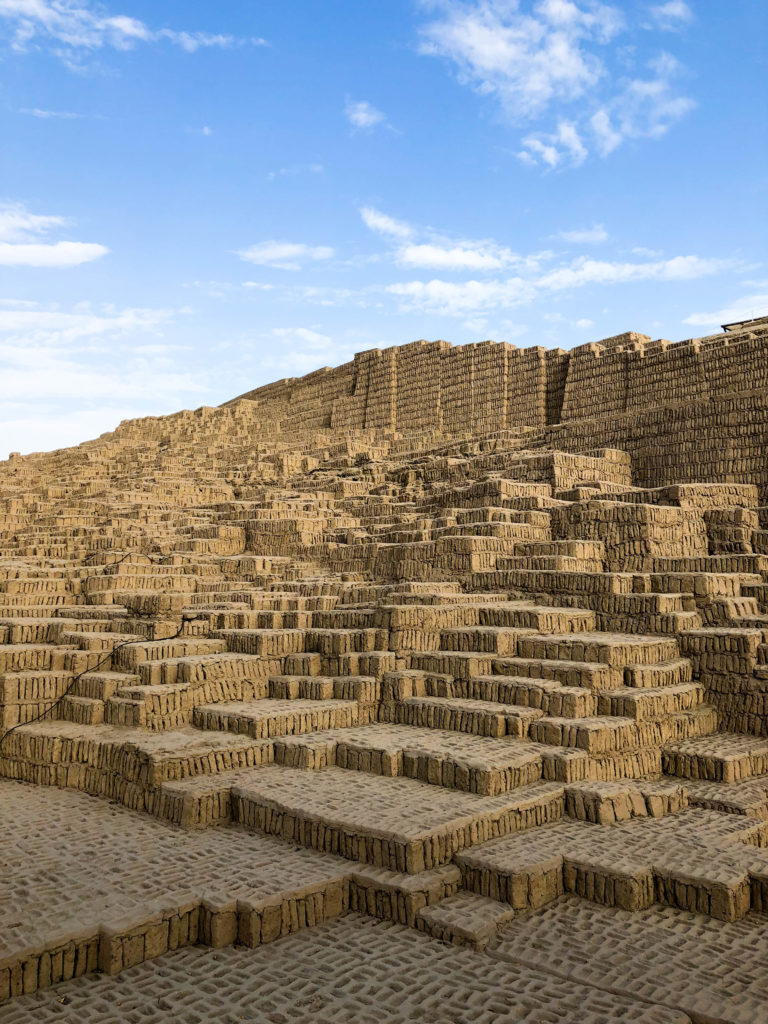 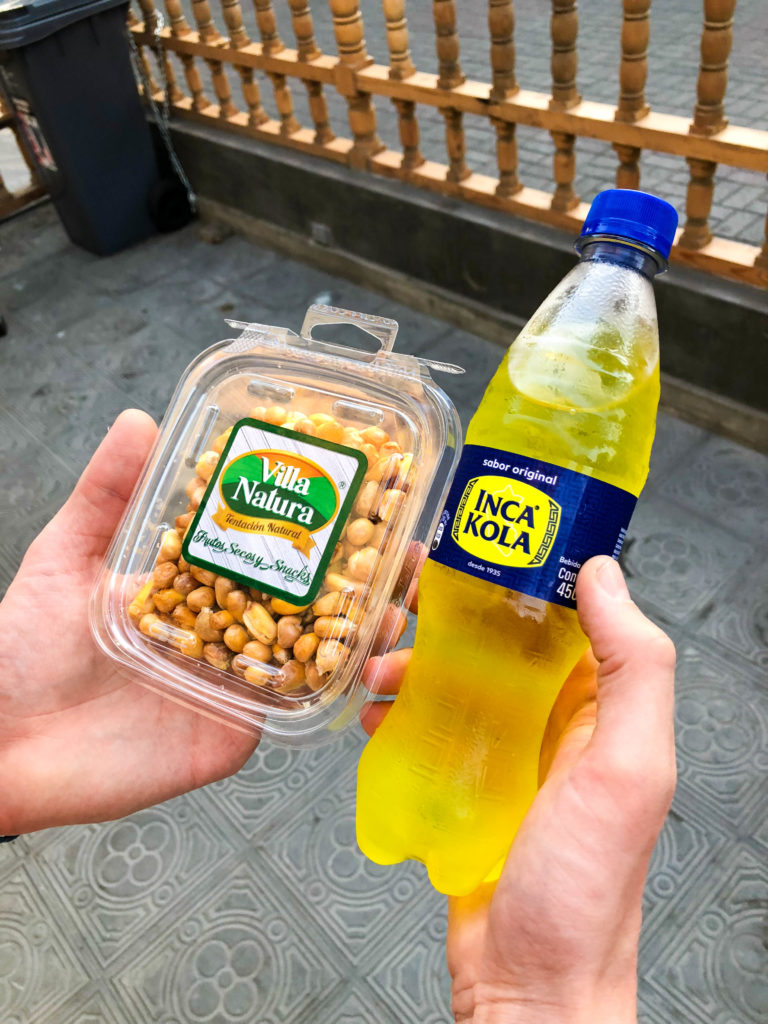 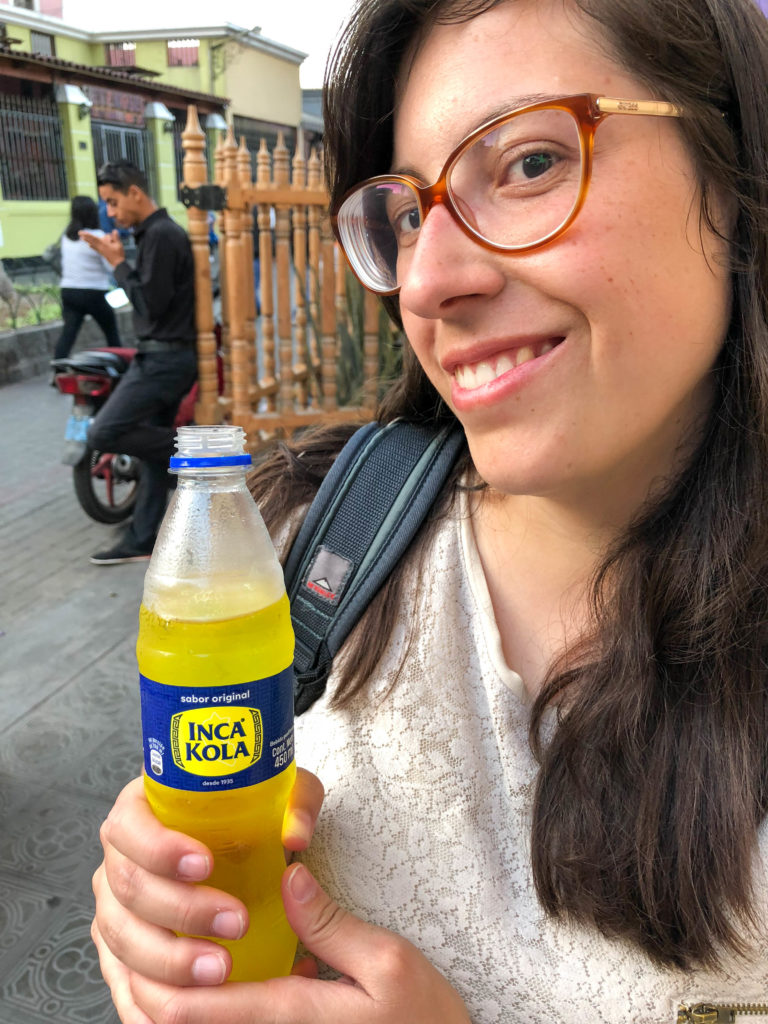 After Huaca Pucllana you can stop in the Kennedy Park. This central park of the Miraflores district is a popular place for the local and tourists. Here you can find handmade souvenirs on a small market, however, the park is most known for its cats. Yes, it is home to more than 100 stray cats which are protected by the local government. Near the park there is one of the Sanguchería El Chinito’s restaurants. Established in 1960 by Don Félix Yon El Chinito became famous for its sandwiches. Especially for chicharrón, freshly baked bread filled with fried pork belly and special sauce you add yourself. Amazingly delicious! So, are you hungry yet? 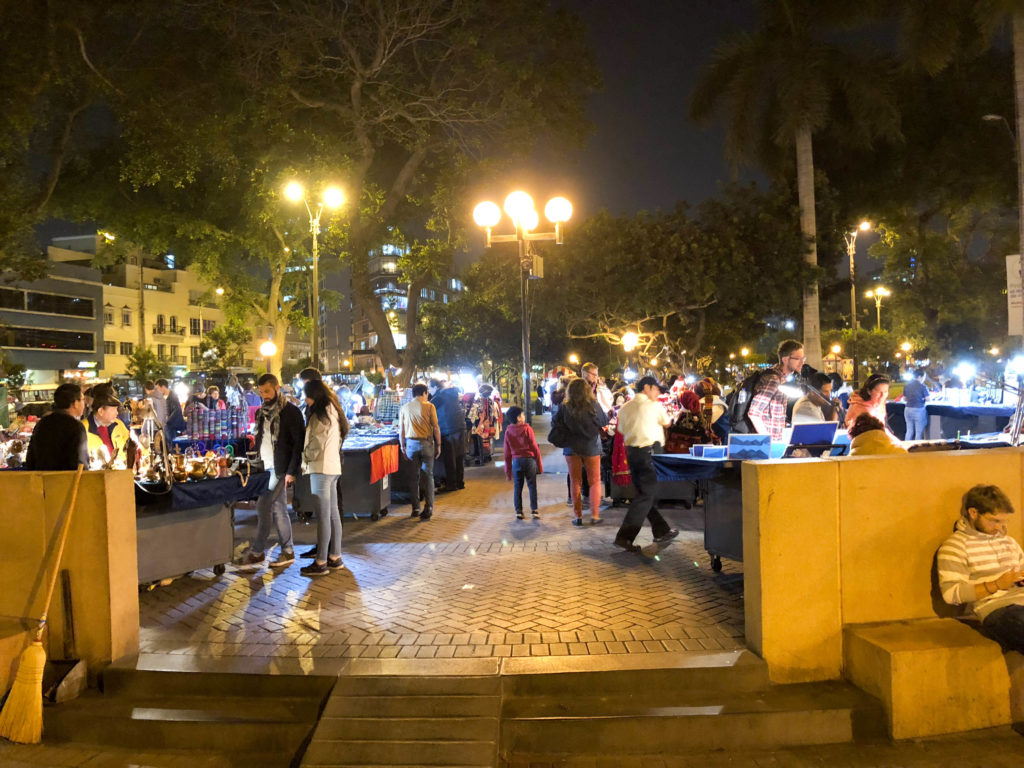 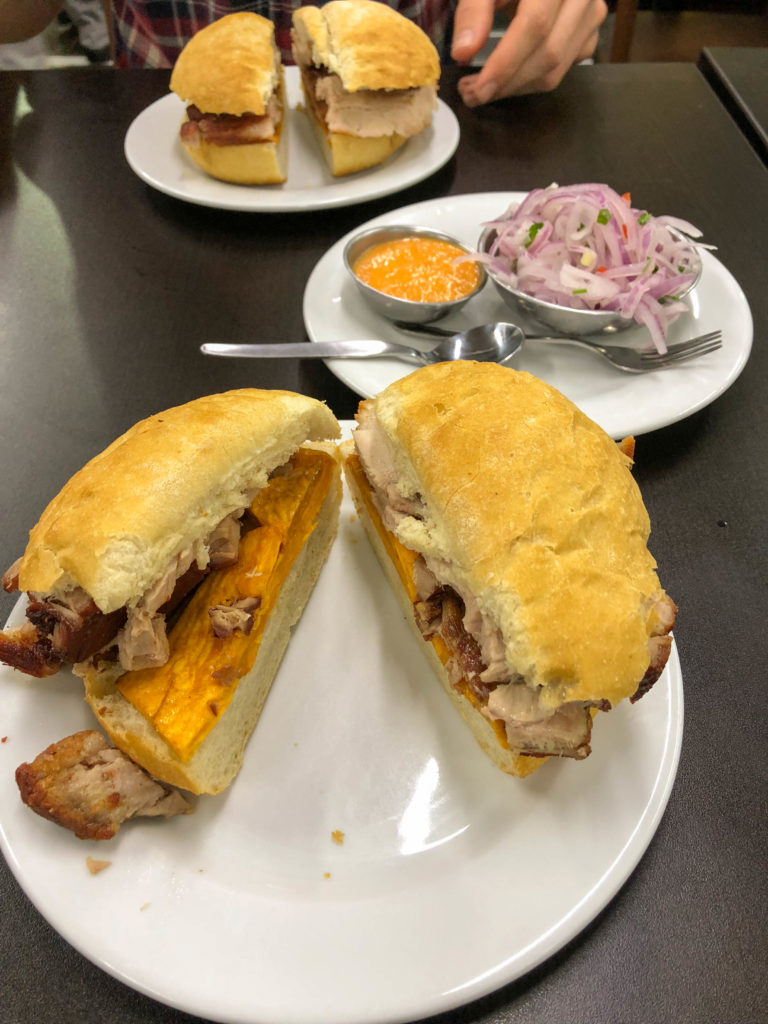 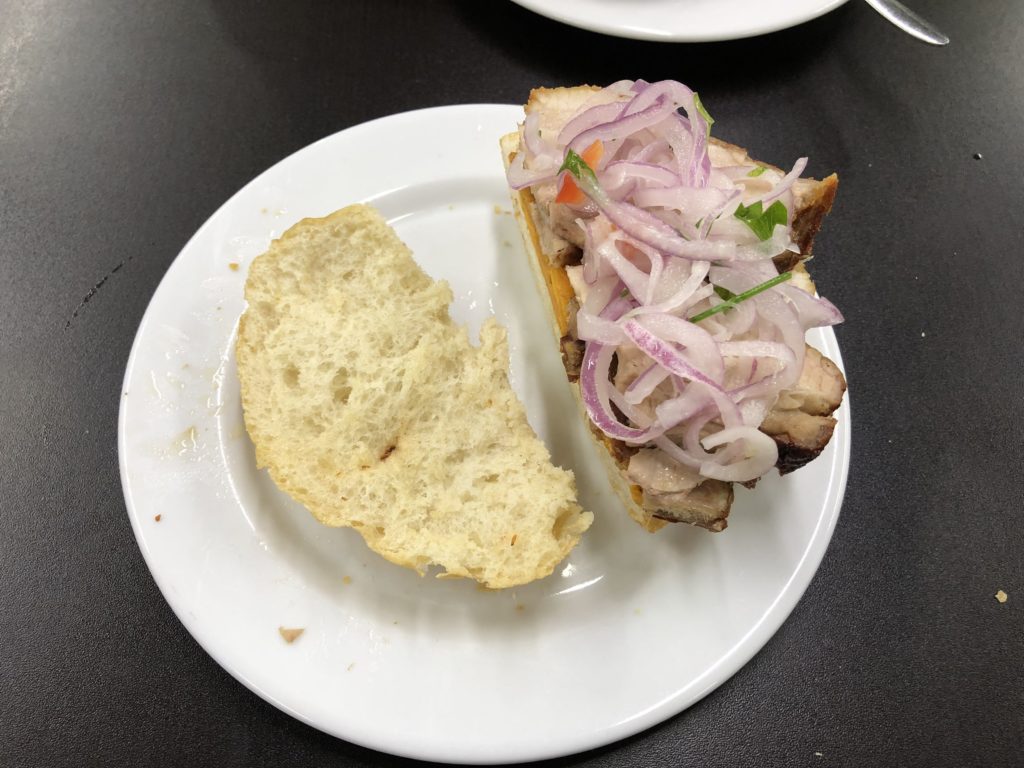 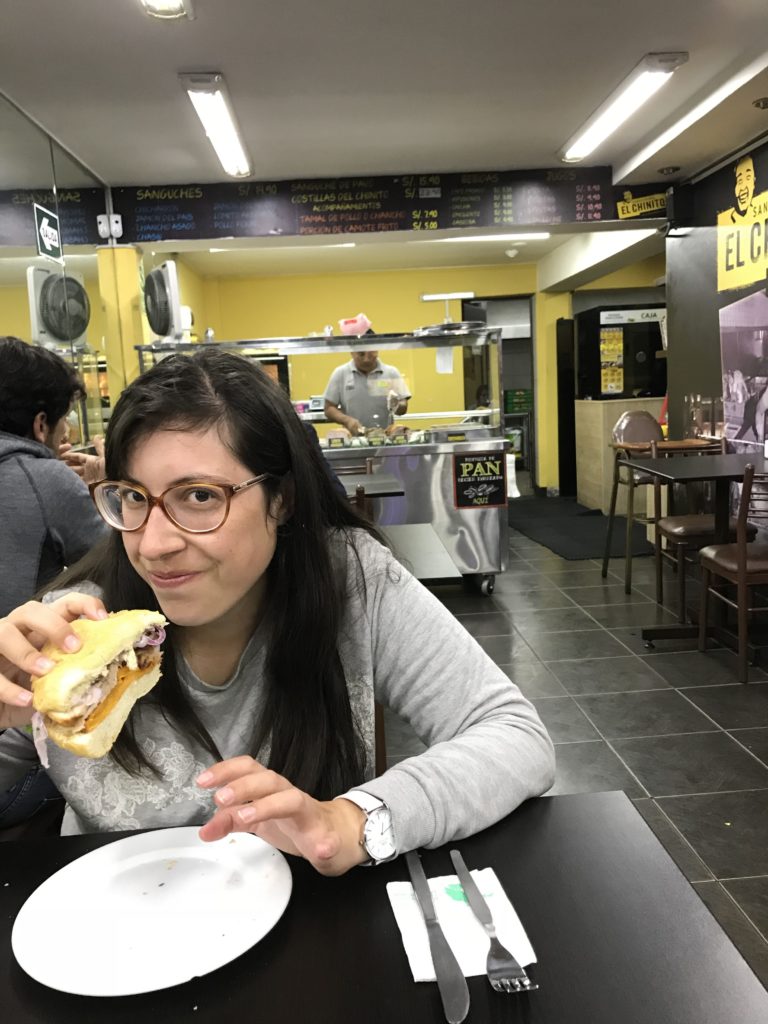 One Reply to “Eating my way through Lima’s Miraflores”