Who doesn’t dream of visiting Cairo, seeing the majestic pyramids and exploring the Egyptian history in the Egyptian museum? Or going on a ride with felucca on the river Nile? Admiring the Mosque of Muhammad Ali? Cairo is really a magical city, however there is another site to it. There is trash almost everywhere, the traffic is absolutely chaotic, the noise pollution is over the top and the smell, well, it’s safe to say it’s not all just nice. It’s definitely a city that serves you with a cultural shock. However, once you explore it a bit, it just gets under your skin. That’s why I wish to tell you how to cross the street in Cairo, so you will be able to get to all the best places you just have to see there. 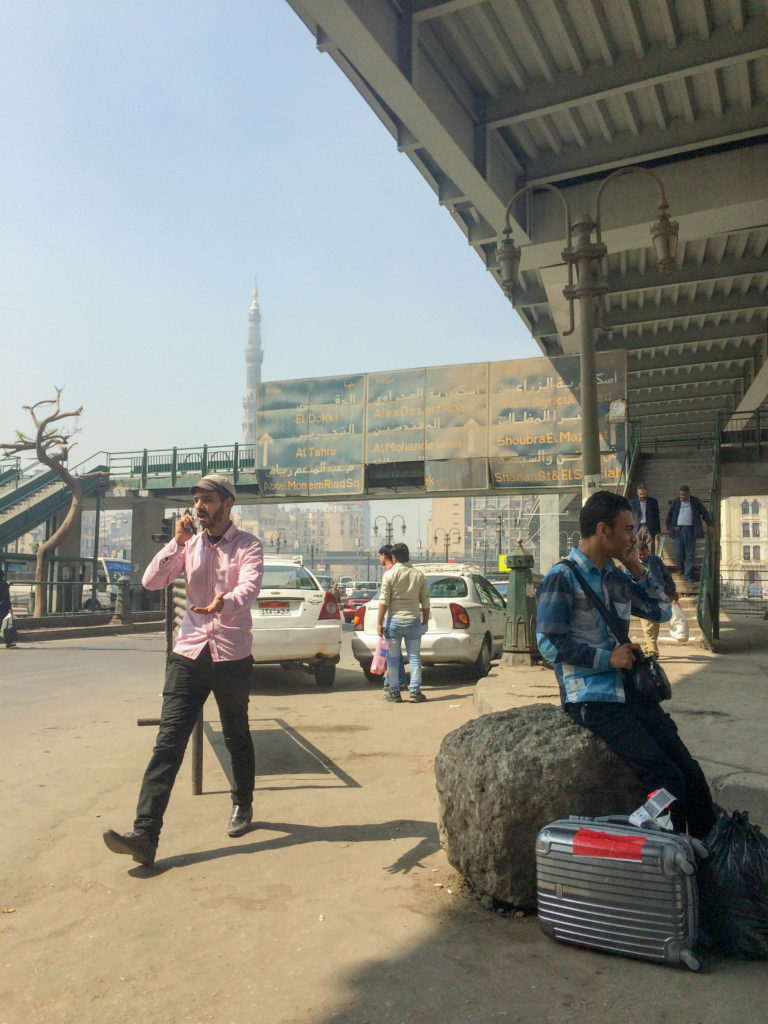 How to cross the street in Cairo?

At first glance a really simple questions but it requires quite a long answer. Because Cairo is a messy and chaotic city, especially when describing its traffic.

Honking, shouting, waving hands, driving fast then hitting the breaks. Small accidents with hitting other cars. Making four car lines where there is space for two. You hardly find a car without scratches and bumps. Then add to this mess all the people trying to cross the street. (There are 9,5 million of people living in Cairo, many more are migrating there daily for work.) They have some traffic lights, but that does not mean drives or pedestrians obey them. There are some zebra crossings, but very rare. I have seen two overhead walkaways and one underpass in five days I spent there. The latter was not that crowded at all, because people were rather crossing the street between the traffic. Shouting at cars why they don’t stop when they are walking on the road.

Then imagine two Europeans wishing to cross the street. Firstly, looking for a zebra crossing. None. Secondly, looking for a break in the traffic. Doesn’t happen. Thirdly, running like crazy in front of the cars, stopping in the middle of the street for other cars to drive by, then running again. Trying not to use your brain and not thinking how dangerous this actually is. At least there is so much traffic the cars can’t drive really fast. However, with time we learned, that the best way to cross the street in Cairo is to follow the locals when they cross it. They usually know what they are doing. But yes, you don’t need an adrenaline park in Egypt, just try to cross the street and you have an instant adventurous experience.

All the sites of the iconic Cairo

Pyramids of Giza and the Great Sphinx

Standing beneath the Great Pyramid of Giza makes you feel small. Stone blocks used to build it are mostly bigger than you. You can only wonder how did they manage to build such majestic monuments. There are six pyramids on the site – three big ones belonging to the pharaohs and three smaller ones for the queens. Go to the panorama site for the best view. Don’t be disappointed by the smallness of the sphinx, it is located quite far from the pyramids so it looks bigger on the photos. 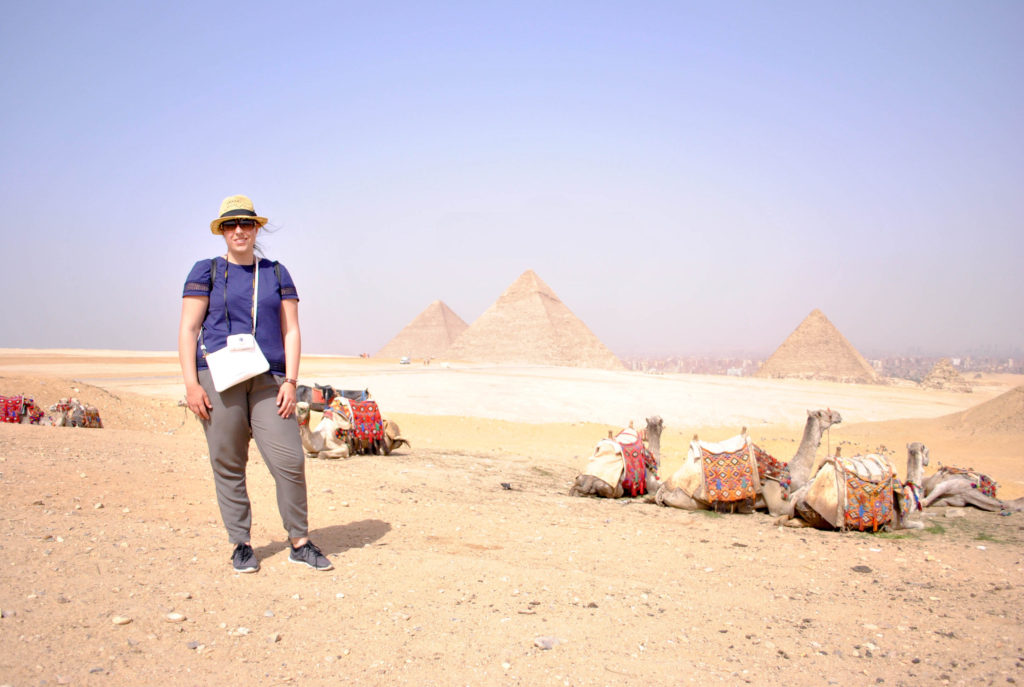 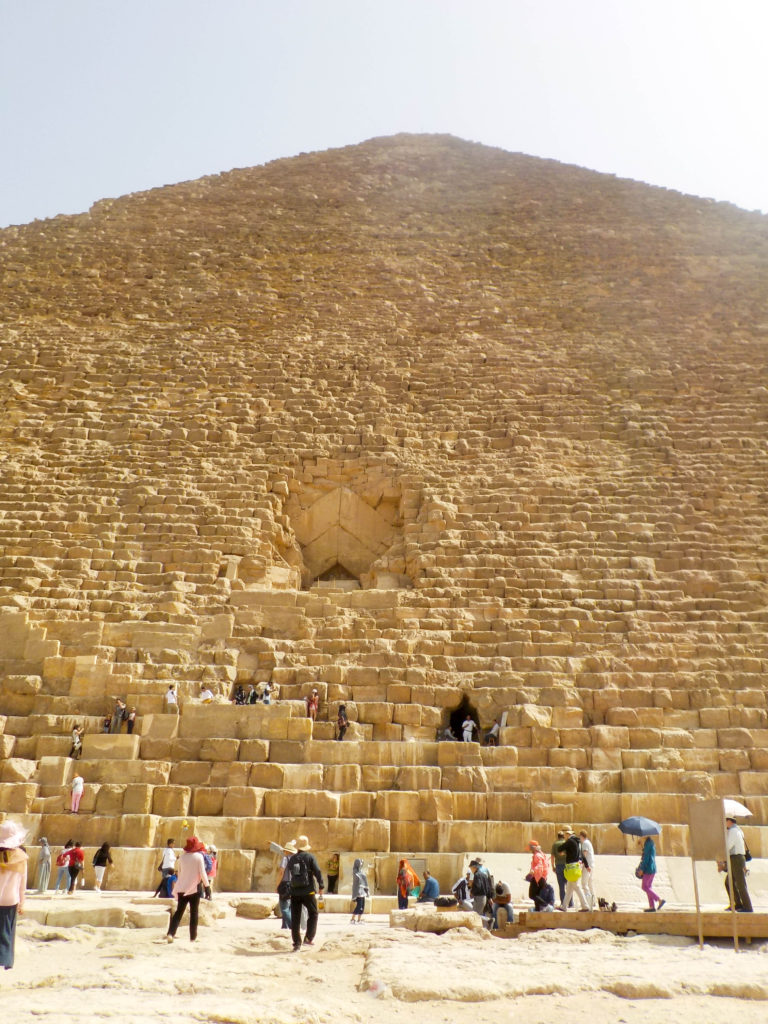 Museum holds 120 thousand items big collection of the ancient Egyptian antiquities. It’s most known piece is the Gold Mask of Tutankhamun, but there are many more historically very important items. The Egyptian historical discoveries are so numerous, this big red mansion in which the museum is situated doesn’t have the place to put on display the whole collection. 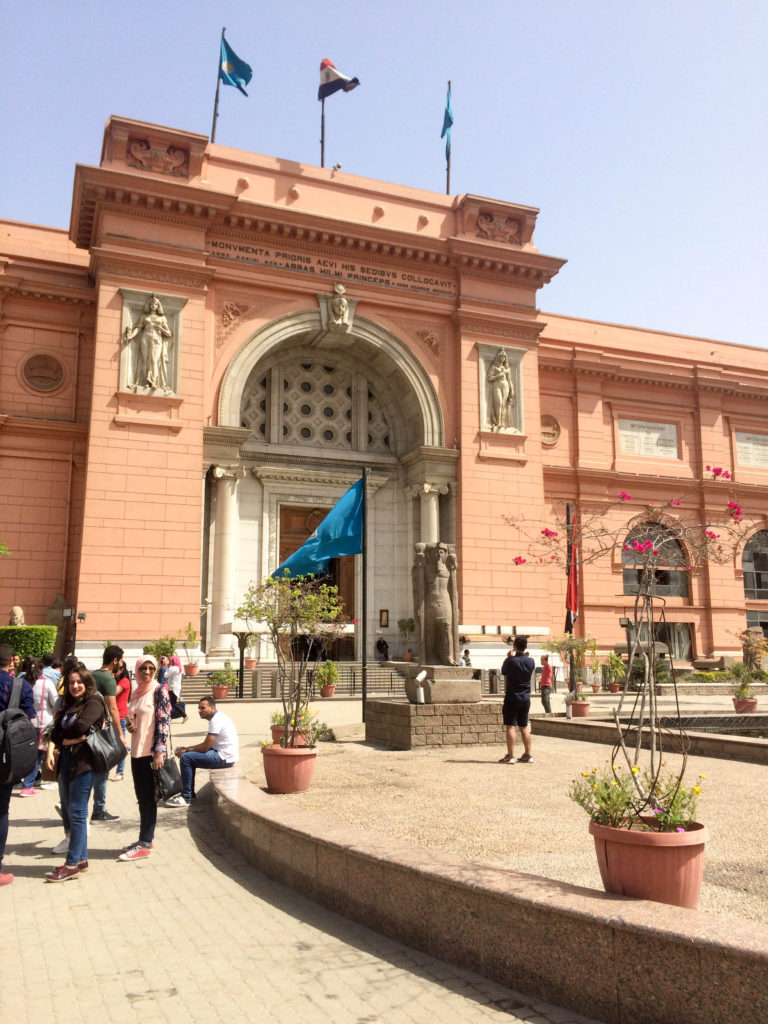 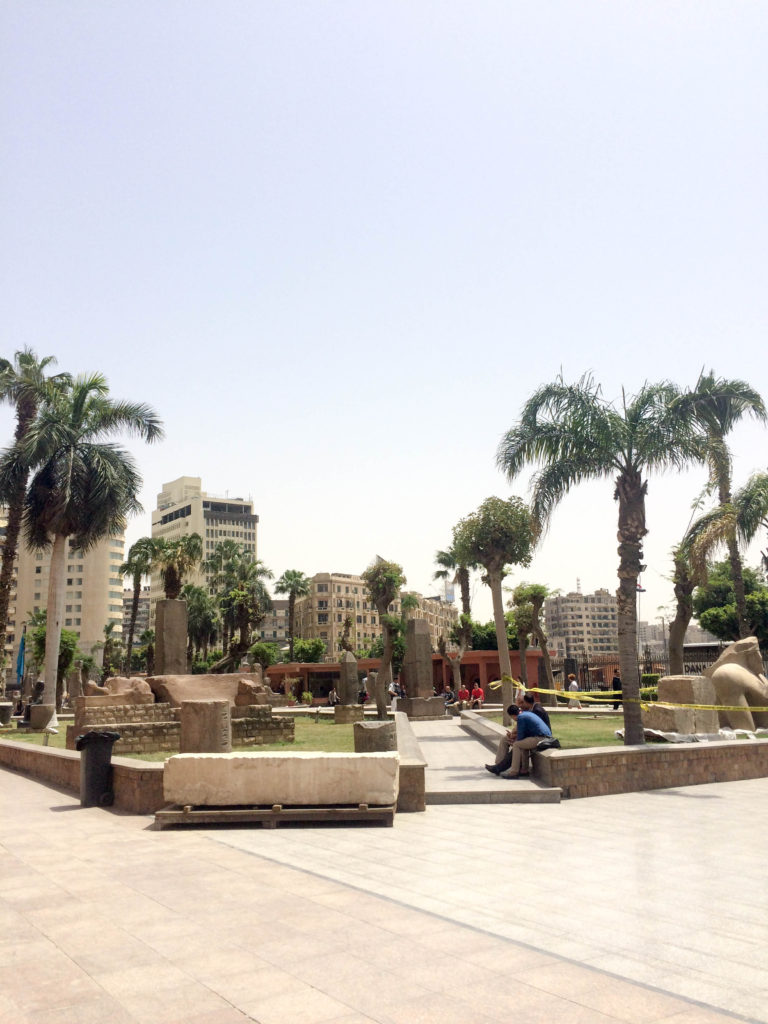 The Cairo Citadel is situated on the Mokattam hill near the city centre. It is an old Islamic fortification with mosques and museum, but its most important site is the alabaster covered Mosque of Muhammad Ali. Enter to see the beautiful courtyard and inside full of lights. 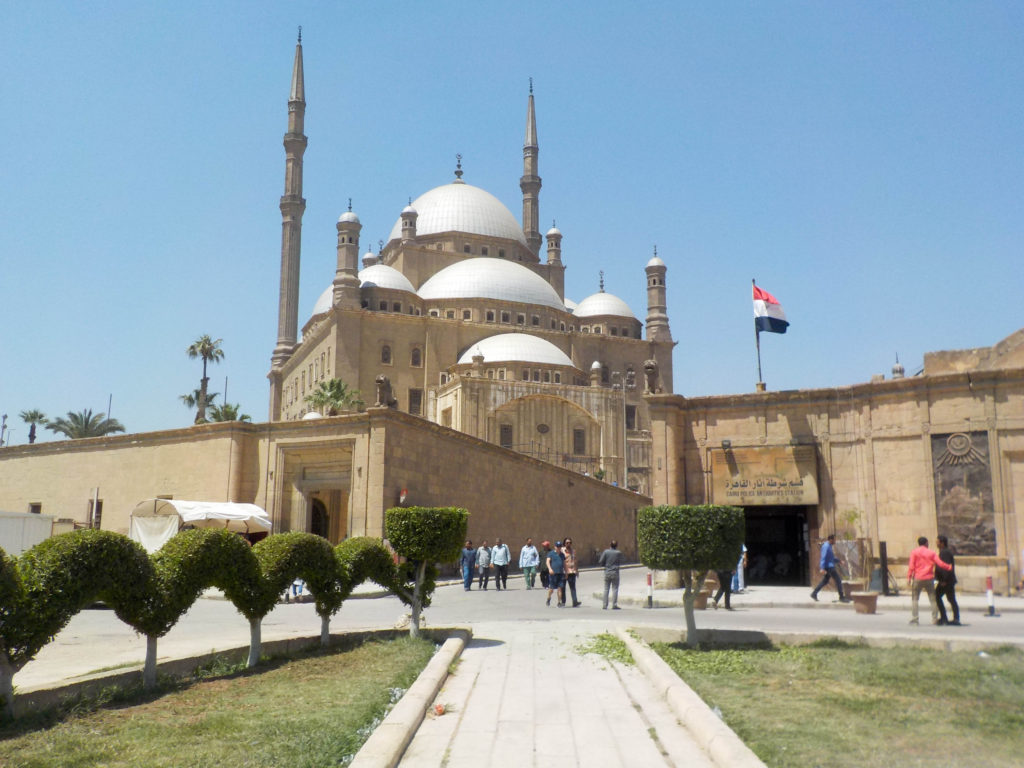 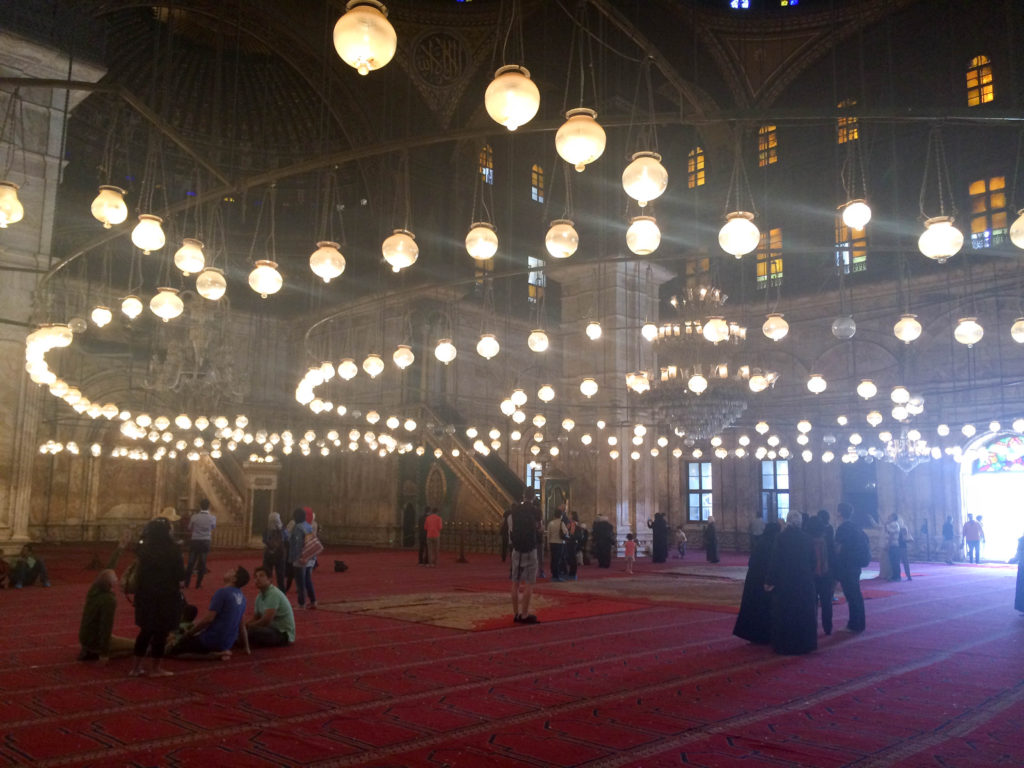 One of my favourite spots in the city. Al-Azhar Park is a green oasis in the middle of the city, beside light breeze and shadows it offers a great view of the Cairo Citadel and the city itself. It’s the best place to hide from the city heath. 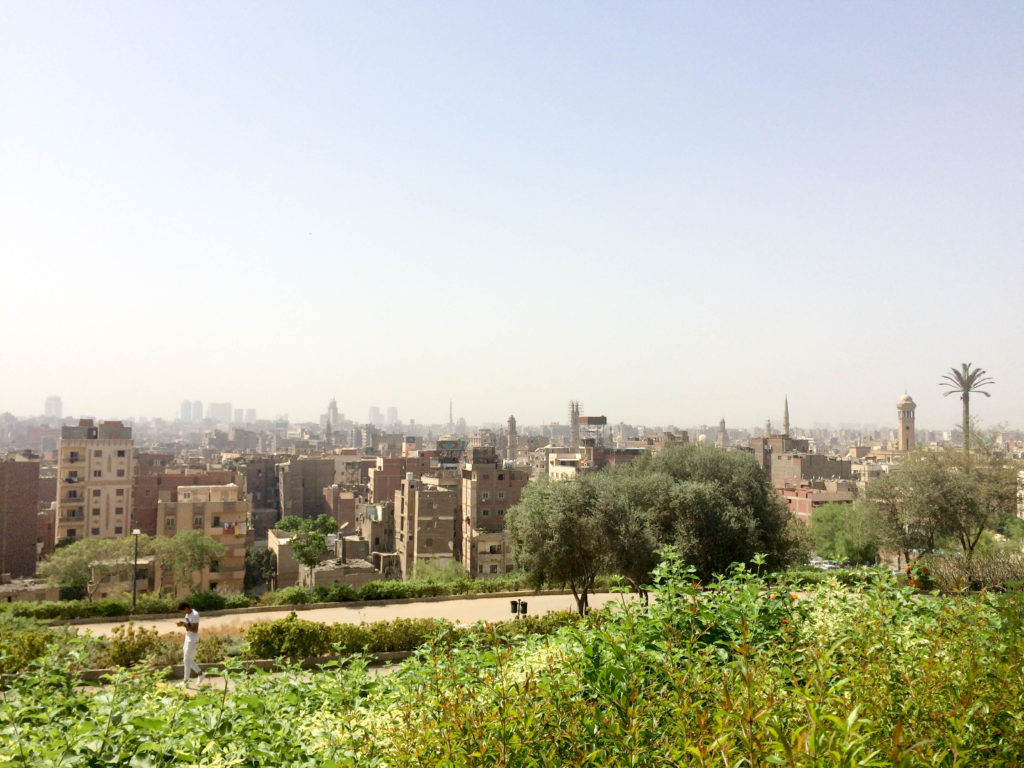 Wonder the narrow street of the bazaar, the best place to buy souvenirs, spices, perfumes and jewellery. It’s also the place for locals to buy clothes, kitchenware, electronic devices etc. Just don’t visit it on a Saturday at noon, it will be absolutely too crowded. 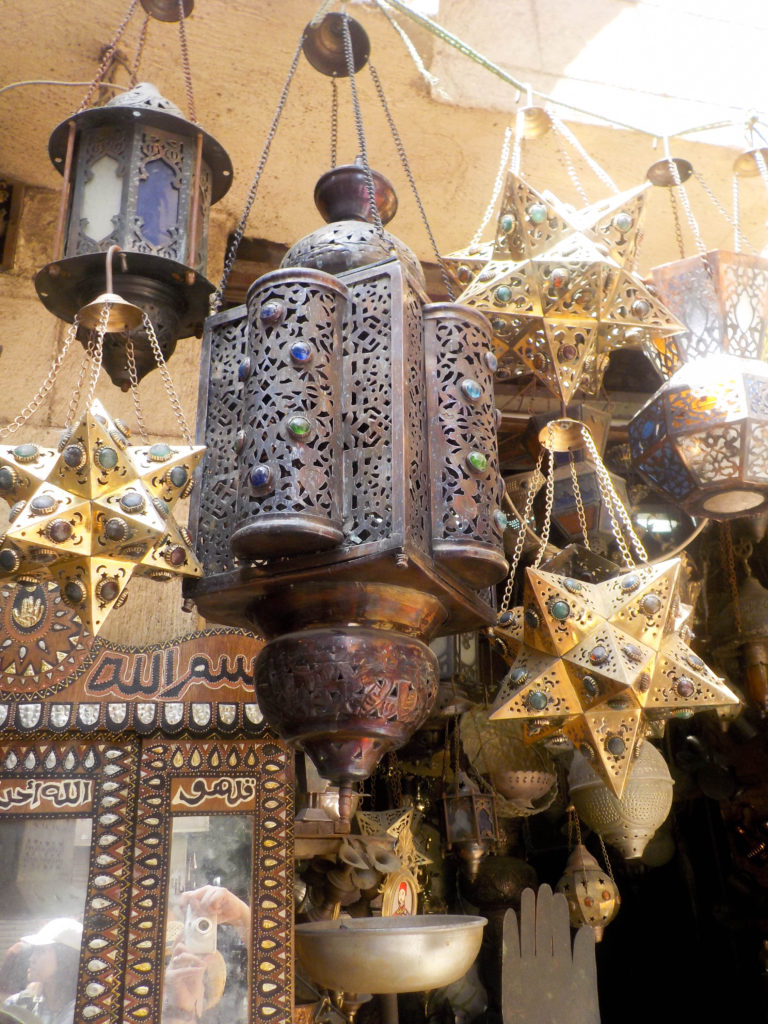 Visit Cairo’s most known Coptic Christian church – the Hanging Church. Its name comes from the fact that the church was built above Roman fortress in the 7th century. Then walk also to the nearby Cairo’s Ben Ezra Synagogue. 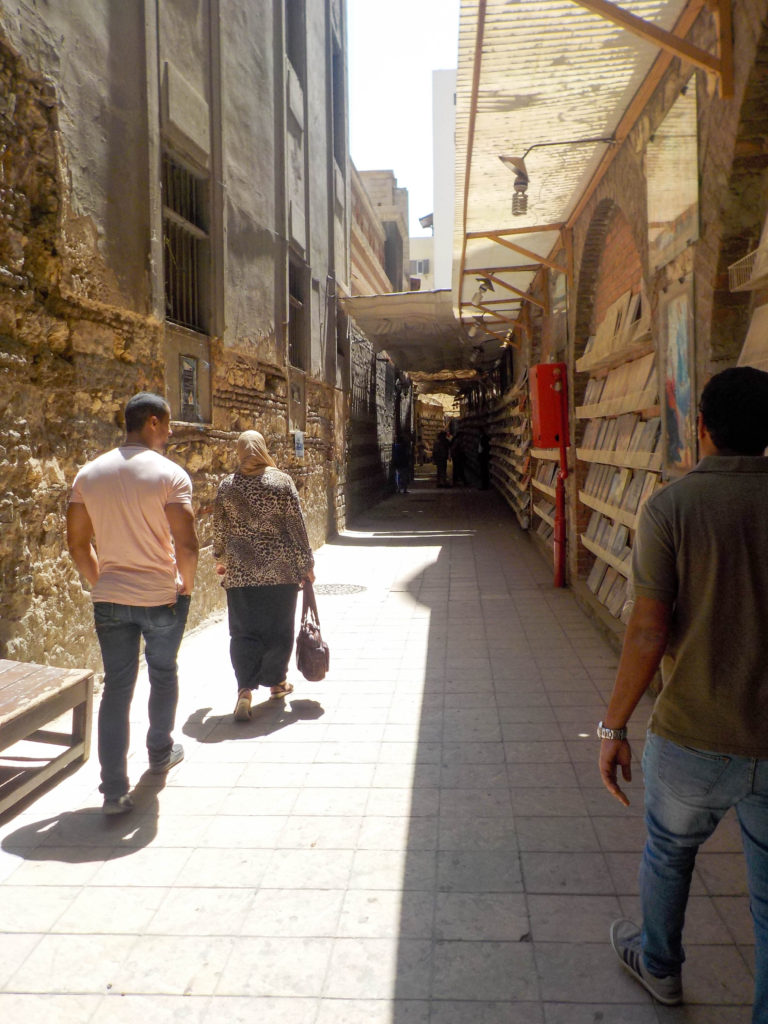 Walk along nice promenade of the river Nile just before it get’s dark, so you can admire all the lights turning on. You can also sit for a drink; the locals make pop up cafes with plastic chairs and tables just next to the river. 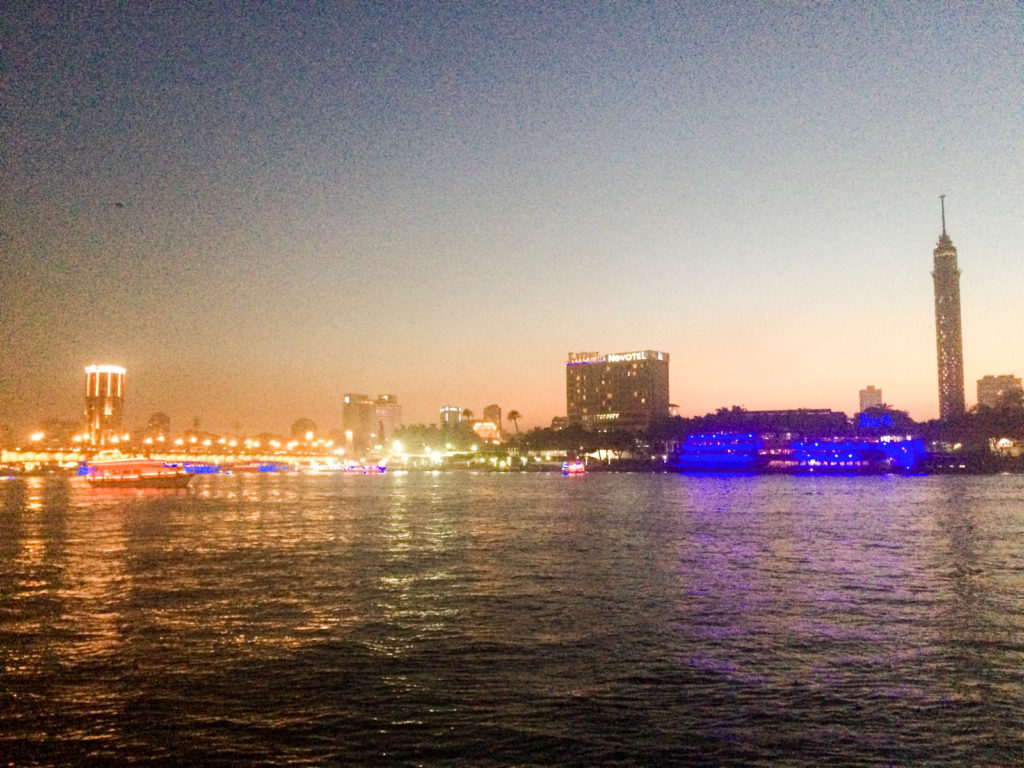 The Papyrus Institute is the perfect place to get to know the detailed process of how to make a papyrus. Stop also at the Perfume Factory, where you will smell many different perfumes and oils made from Egyptian flowers and plants. For me the most interesting was the scent of saqqara flower, which is made from a flower that is growing only around the Saqqara pyramids and it smell develops differently on every person. 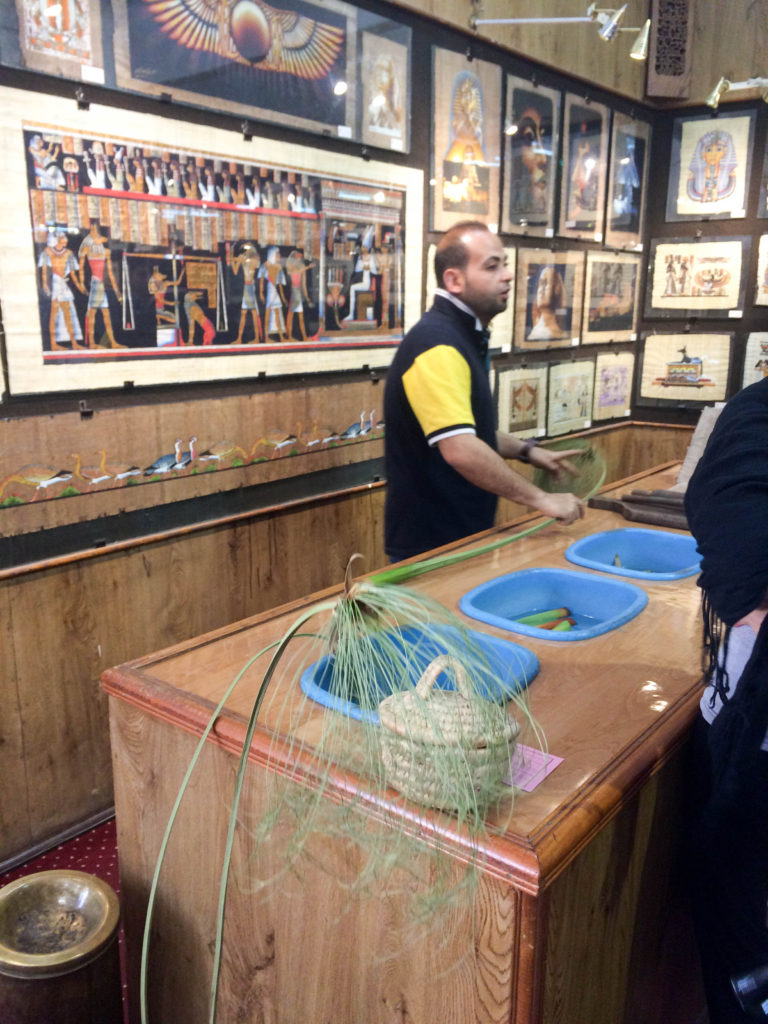