When we started researching what stops to make on our Peru & Bolivia trip we always knew we wanted to see the Uyuni salt flat. What we discovered later was that this area is just amazing and full of natural beauties, so you have to spend a few days here to see the main sights. We decided to take a three days long organised tour to see Salar de Uyuni, Reserva Nacional de Fauna Andina Eduardo Avaroa and incredible lagoons in the area.

This tour offers so many amazing sites, I could not squeeze them all into one blog post. So here is the part one, which includes all the facts you have to know before going on this tour and all the stops we made on our first day of the tour.

What you need to know before going?

There are numerous tourist agencies offering tours for exploring Uyuni and its surrounding areas. If you go on tour that lasts a few days be really careful which agency you choose. In this case it is better to pay a bit more and really enjoy this experience. Because tours offer different accommodations, in the middle of the Reserva Nacional de Fauna Andina Eduardo Avaroa you have only basic accommodation with shared rooms, no shovers and no heating. It is also good to get a tour that provides all the meals and gives you sleeping bags. In any case if you get cold easily, as I do, bring extra blankets and really warm clothes for sleeping. Also bring some snacks and enough water for the whole duration of the tour. Don’t forget spare battery for your electronic devices. 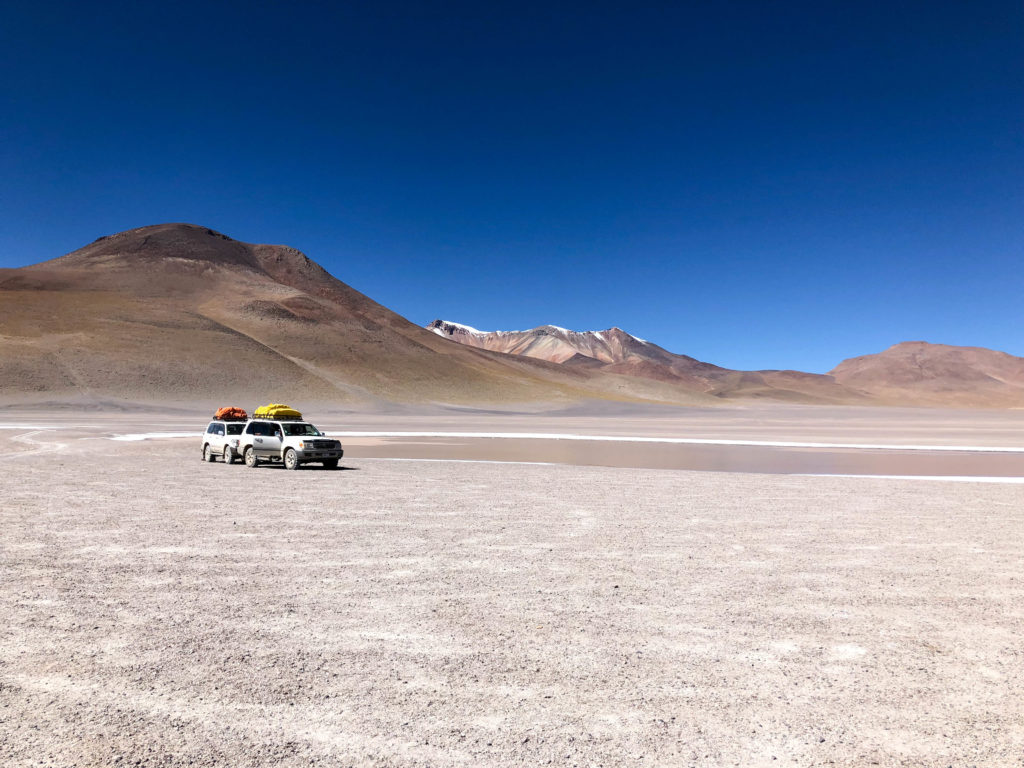 Salar de Uyuni and Reserva Nacional de Fauna Andina Eduardo Avaroa are remote areas in the southeast of Bolivia on the altitude between 3500 and 5000 meters above sea. This means even in the summer time it can get cold, especially in the nigh. So bring lots of layers, baseball hat for protection from sun and winter hat for the evening cold. Don’t forget also the sun cream and sunglasses, because the sun is really strong here and you can get burned easily. 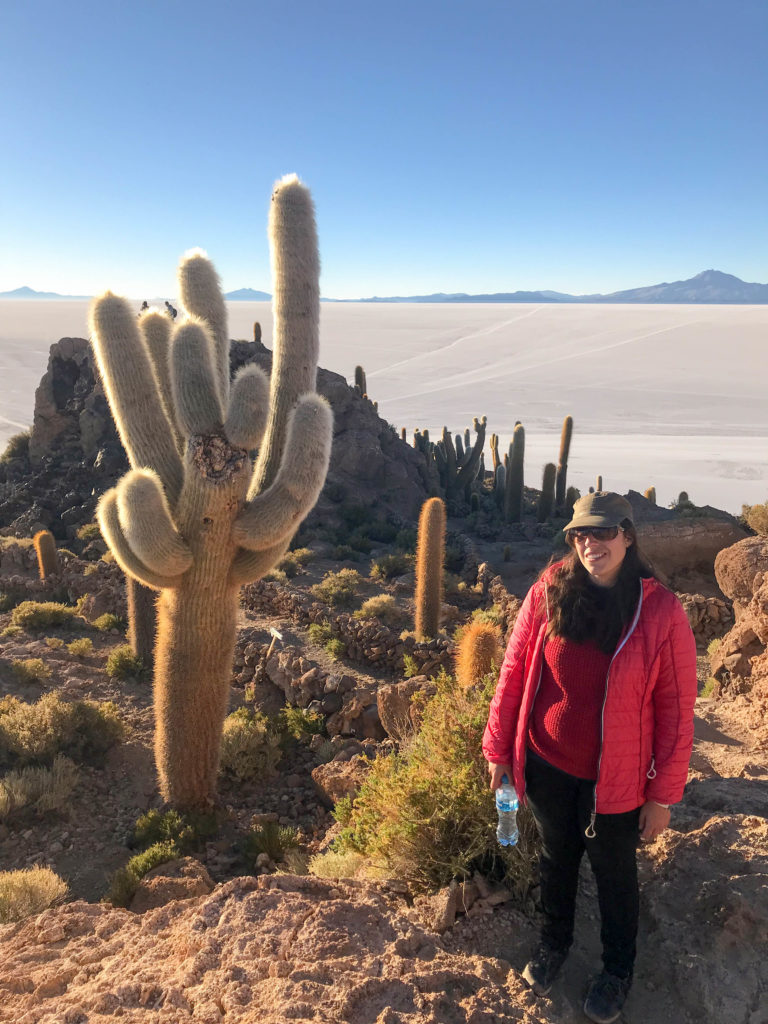 This little sleepy town’s main purpose is to host tourist that start their tours to the salt flats and the national park from here. So here you will find a lot of restaurants, hotels and souvenirs shops. There is not much to see here, so we decided to take a night bus from La Paz, there are many of them, all arriving to Uyuni early in the morning. After arriving we had time for breakfast, buying the supplies and then we embarked on our jeep and started the tour. 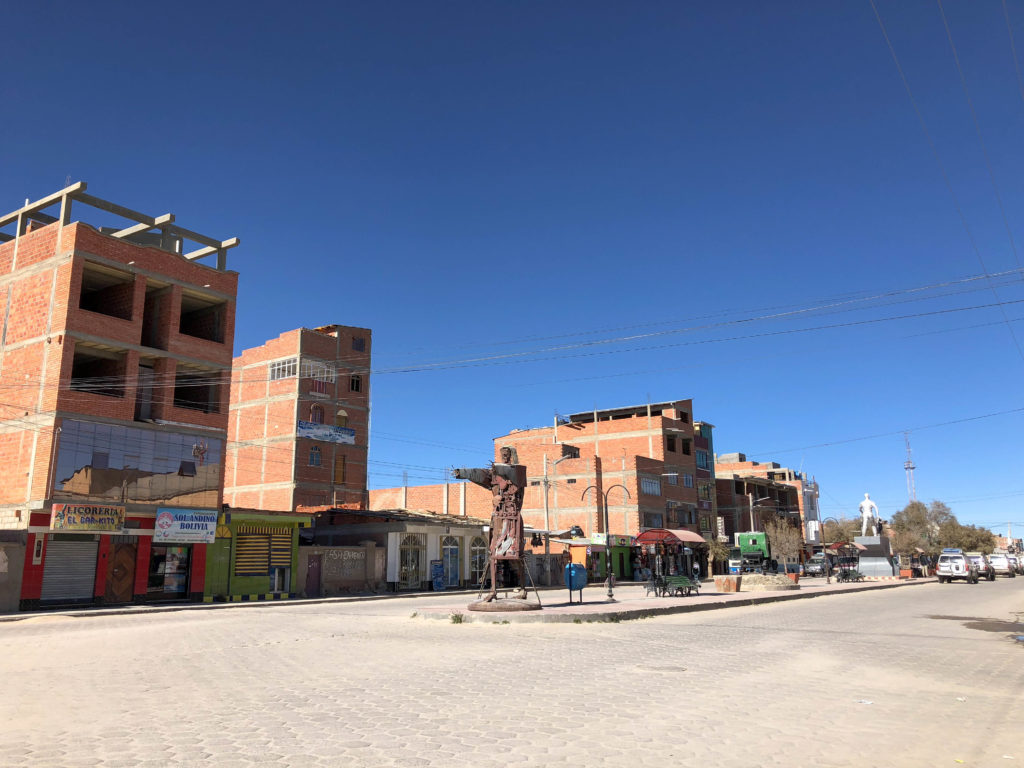 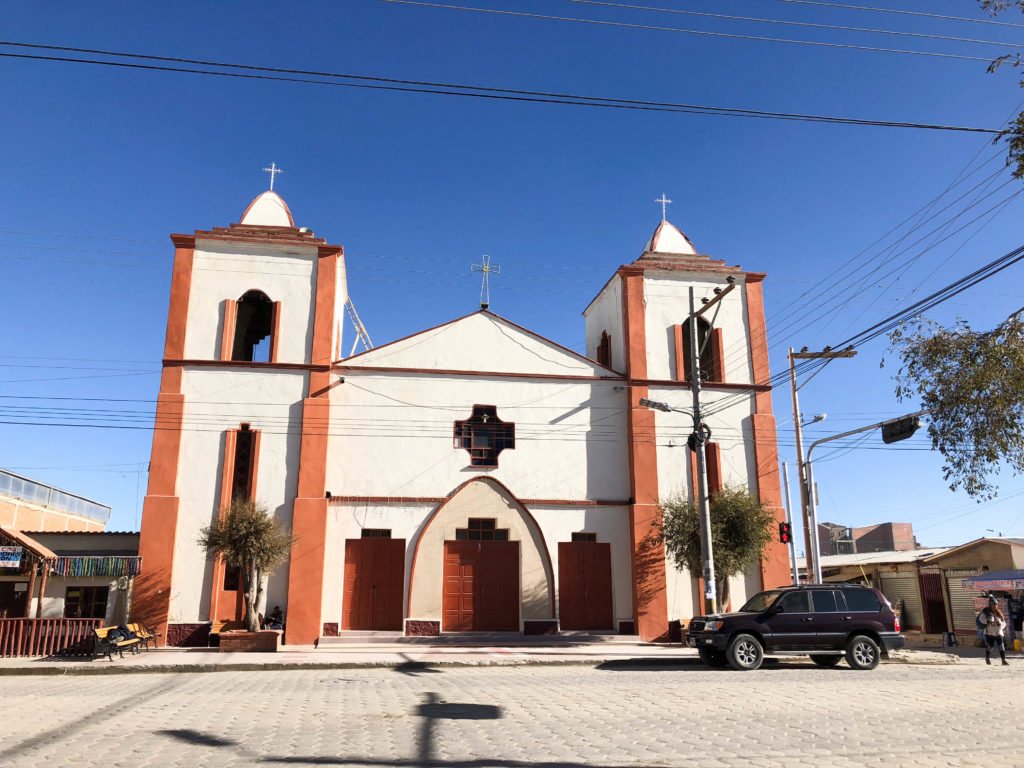 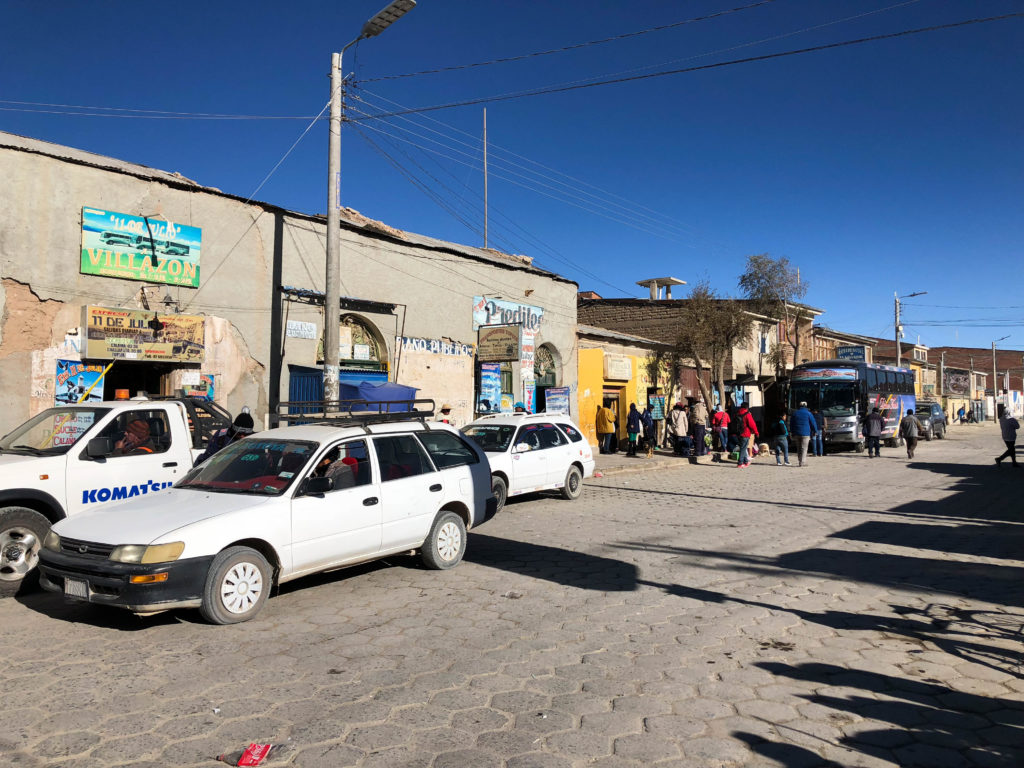 The Great Train Graveyard is a cemetery of old trains from the early 20th century, that were mostly imported from Britain and are today rusting away on the outskirts of Uyuni town. Uyuni used to be an important transportation hub of South America but the plans to build even bigger network of trains were abandoned because of neighbouring tensions and technical difficulties. So the locomotives and equipment were just left there to decay. Today they are a popular photo spot for tourists. 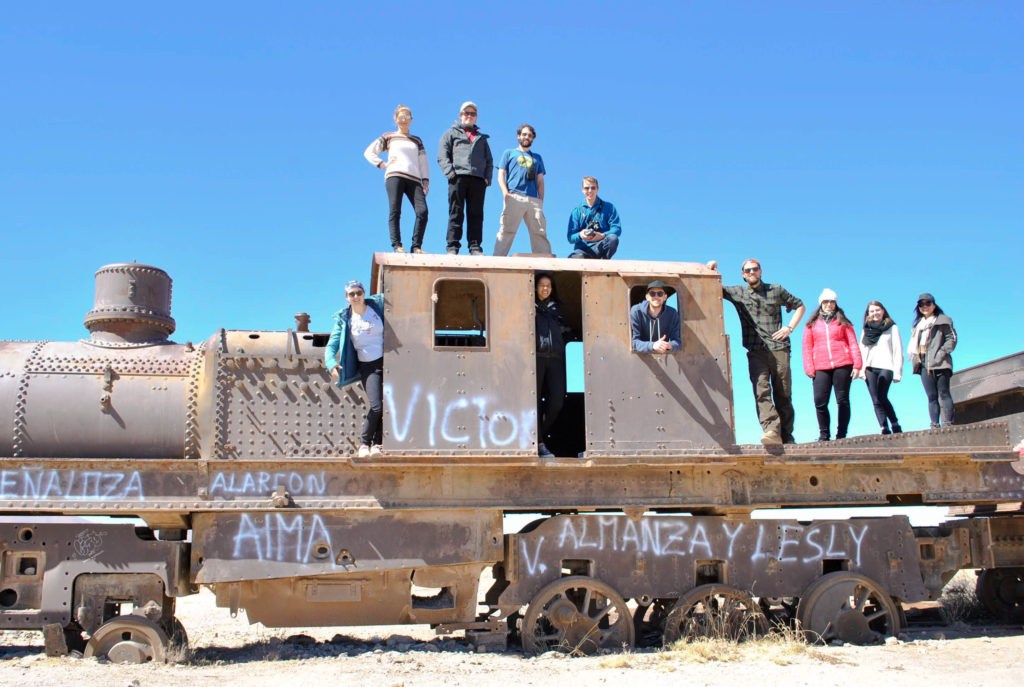 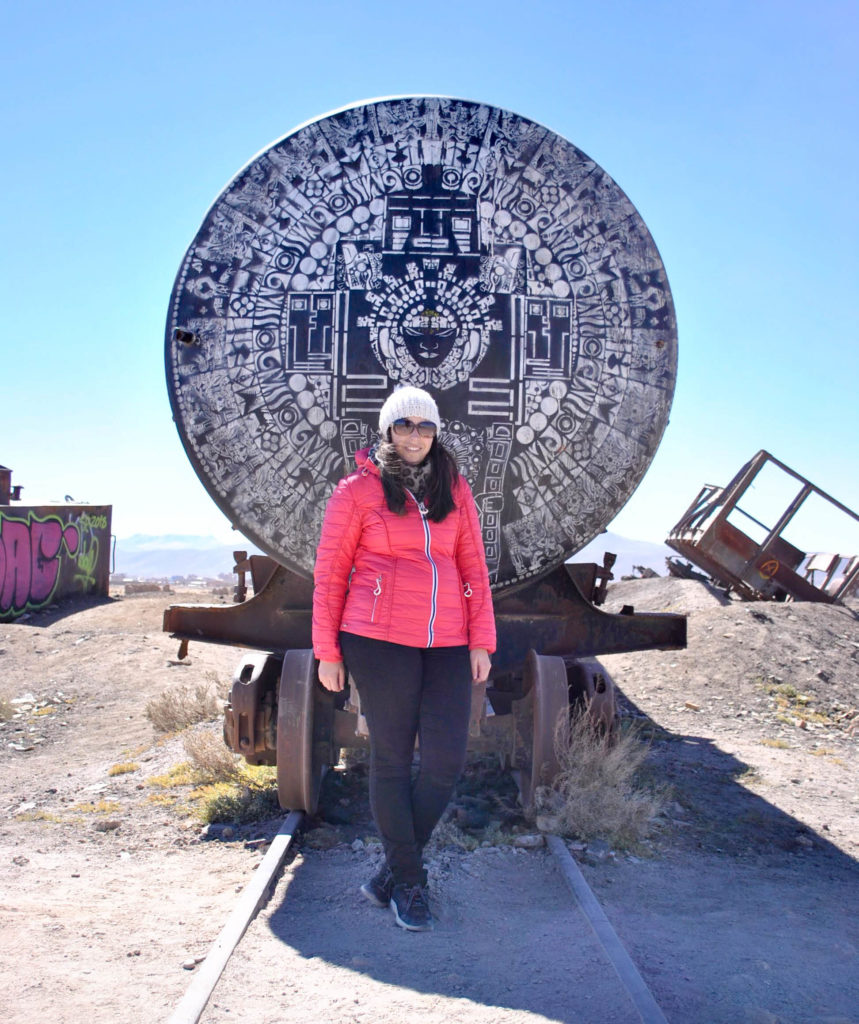 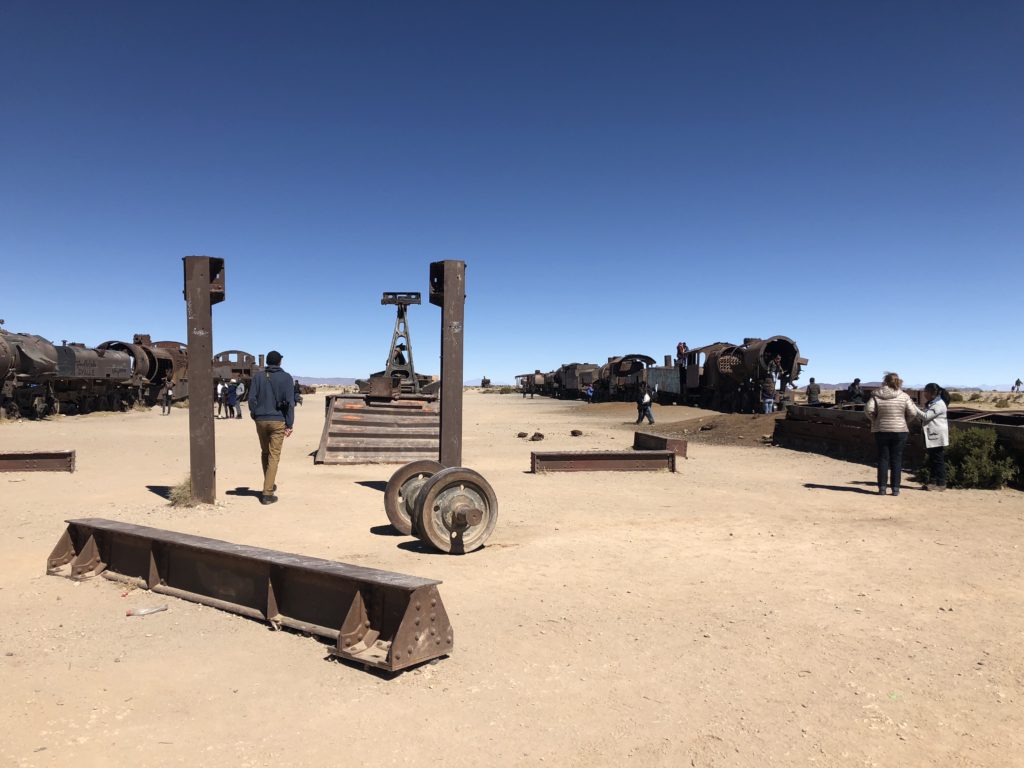 A small village of Colchani lies on the outskirts of the Uyuni salt flat and holds an important salt factory with capacity to extract 25,000 tons of salt per year. In total it is estimated that the salt flat of Uyuni contains over 10 billion tons of salt. In Colchani we saw a small family salt factory, one of many that are part of Colchani’s cooperative for salt production. And even houses in Colchani are made of salt bricks. 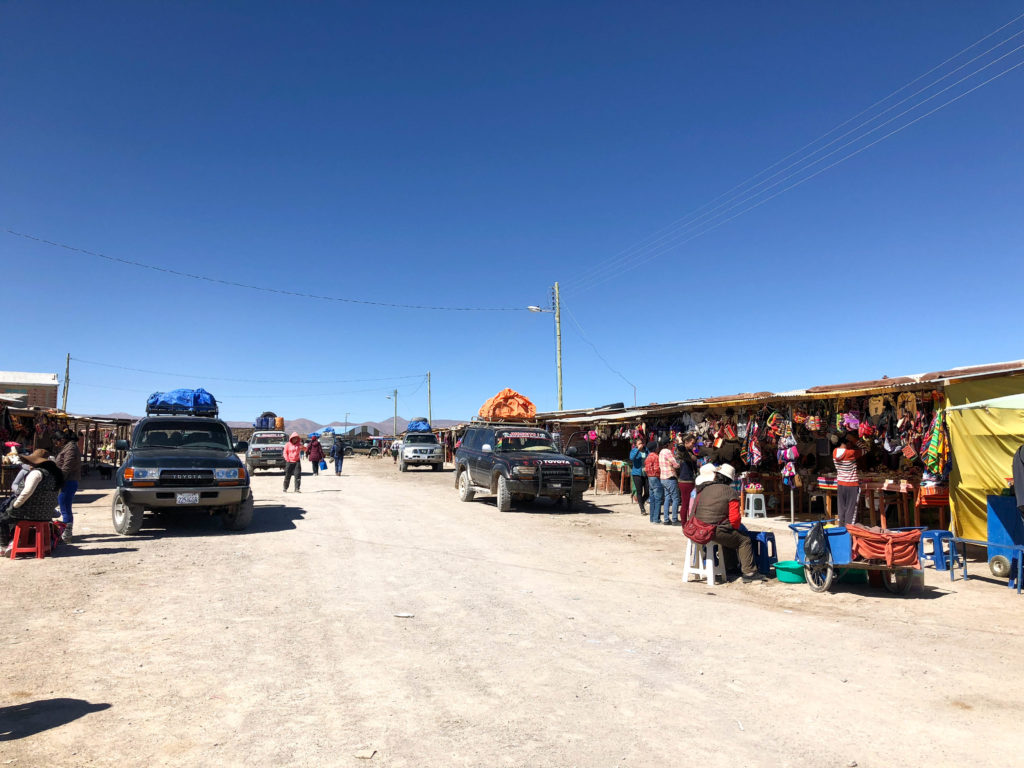 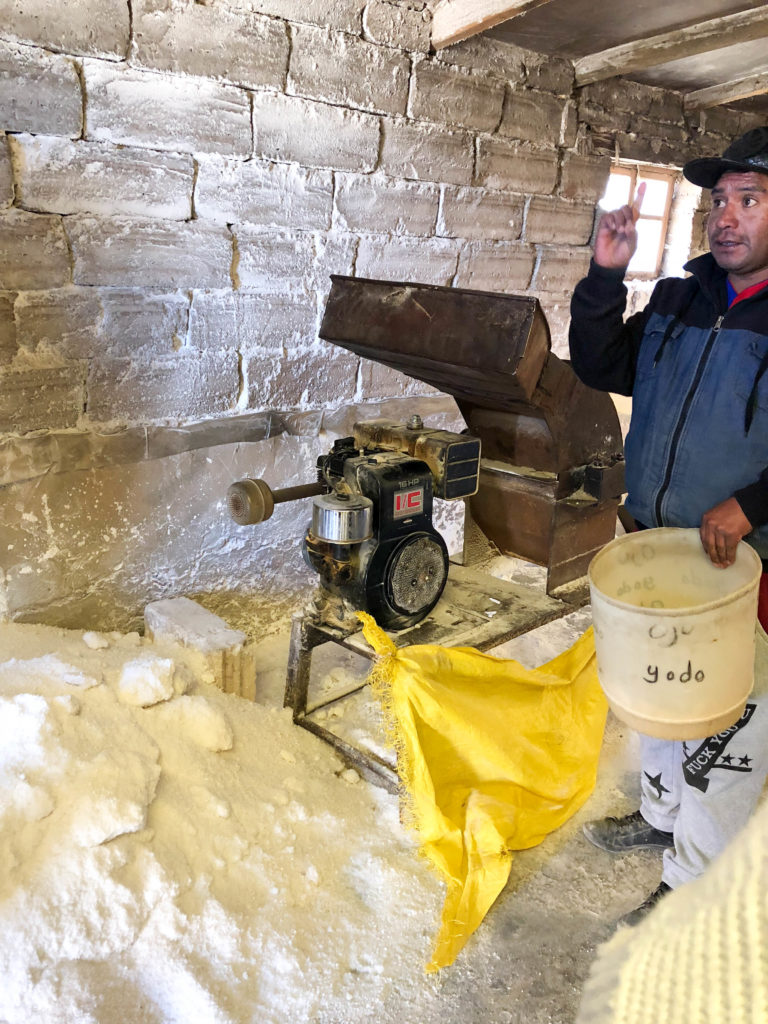 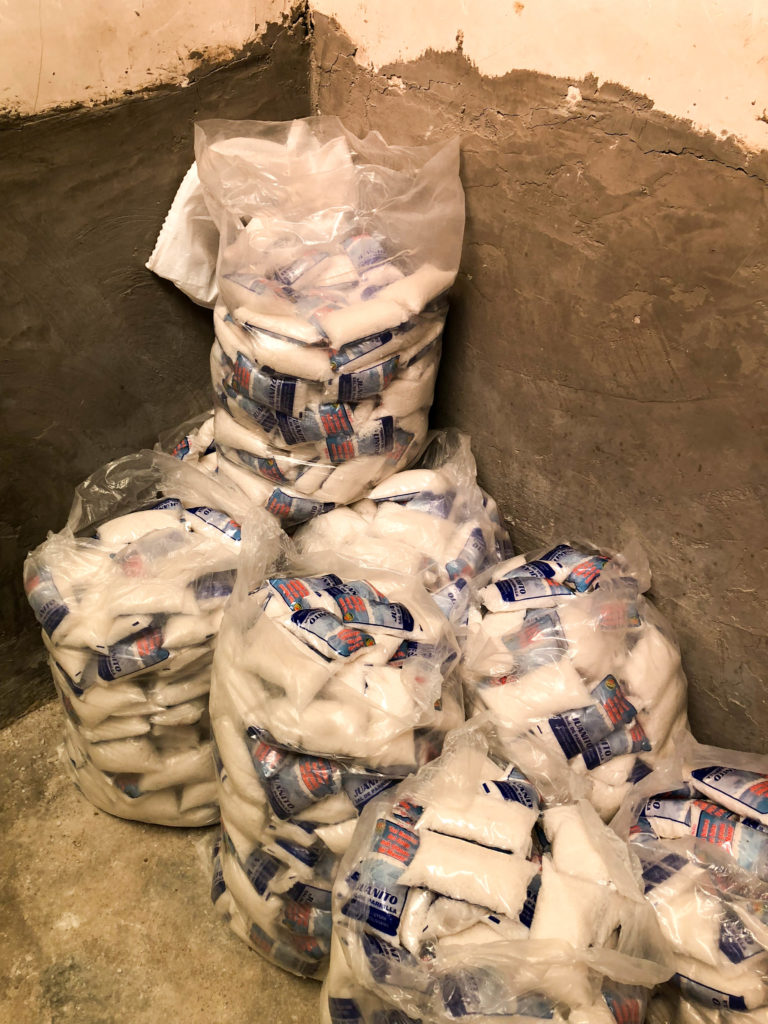 The famous great salt flat of Uyuni is world’s largest salt flat that covers an area bigger than 10,500 square kilometers. It is truly incredible to admire this enormous flat white landscape and seeing the Andean mountains at the background. The altitude of the salt flat is 3,656 meters above sea. In Salar de Uyuni you can visit, beside small piles of salt in the shape of pyramids, of course, the salt hotel, which is entirely made of salt bricks. This hotel is today, because it caused too much pollution, closed, so you cannot spend the nigh inside the salt flat. Next to the hotel there is the flag island, an area full of flags from different countries and organisations, and not far away also the Dakar Rally monument. Of course we didn’t miss an opportunity to take the famous Uyuni funny photo. You can see all of them in “The endless creativity of Salar de Uyuni” blog post. 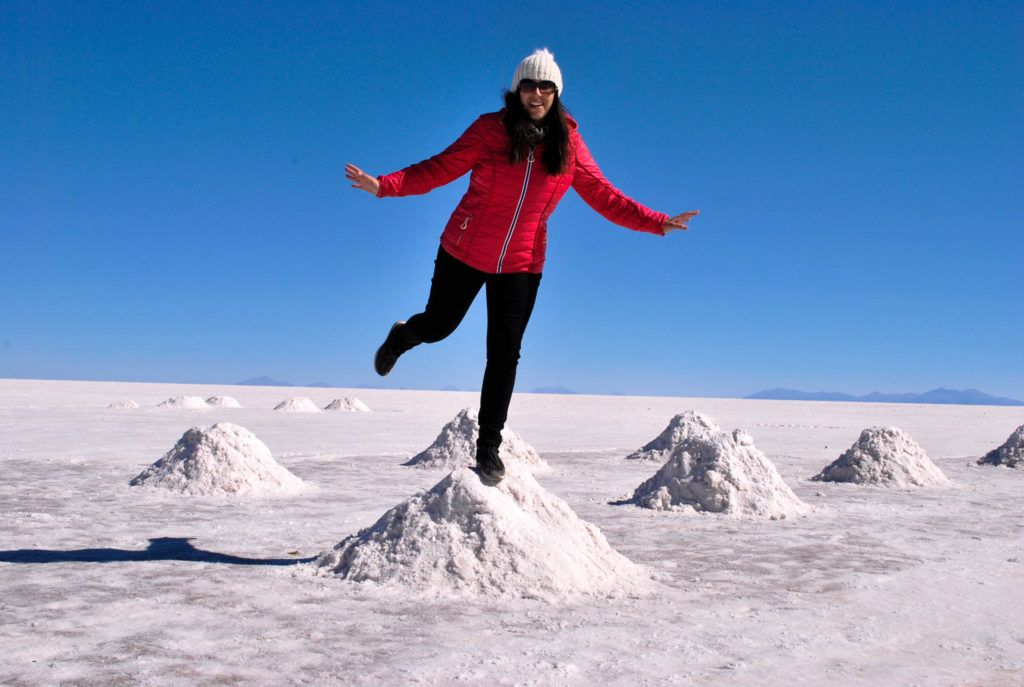 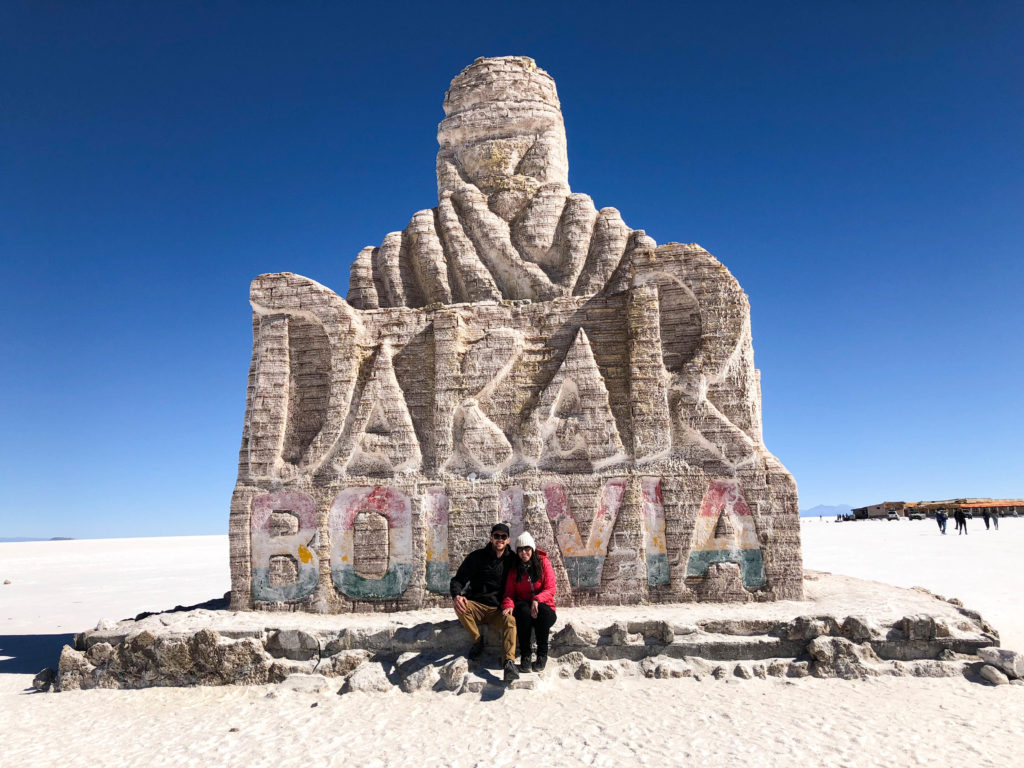 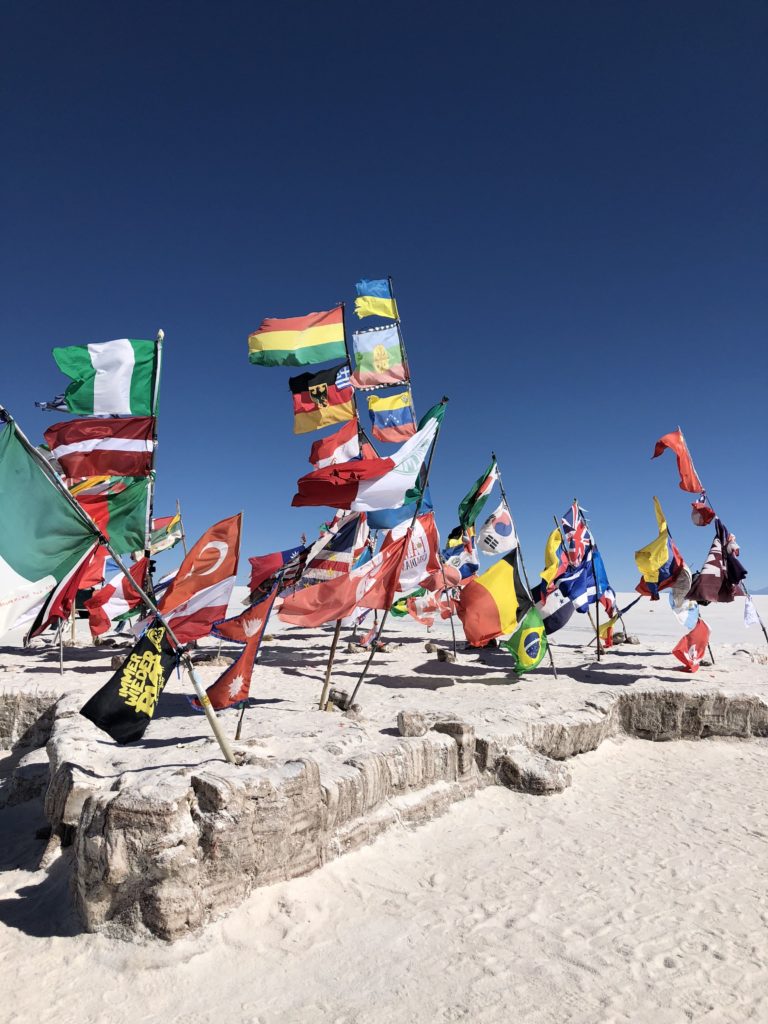 A heaven for all the cactus lovers! Fish island, as the Incahuasi is called in English, is a small hilly patch of land in the middle of Salar de Uyuni. It is full of different cactuses, old an young, small and gigantic, among them you can find the San Pedro cactus, a columnar cactus native to the Andes Mountains. Once you climb on the top of the island you get an amazing views over Uyuni salt flat. We descended from the island just in time for the sunset and it’s something magical to see the red light from the Sun paint the white salt falt. 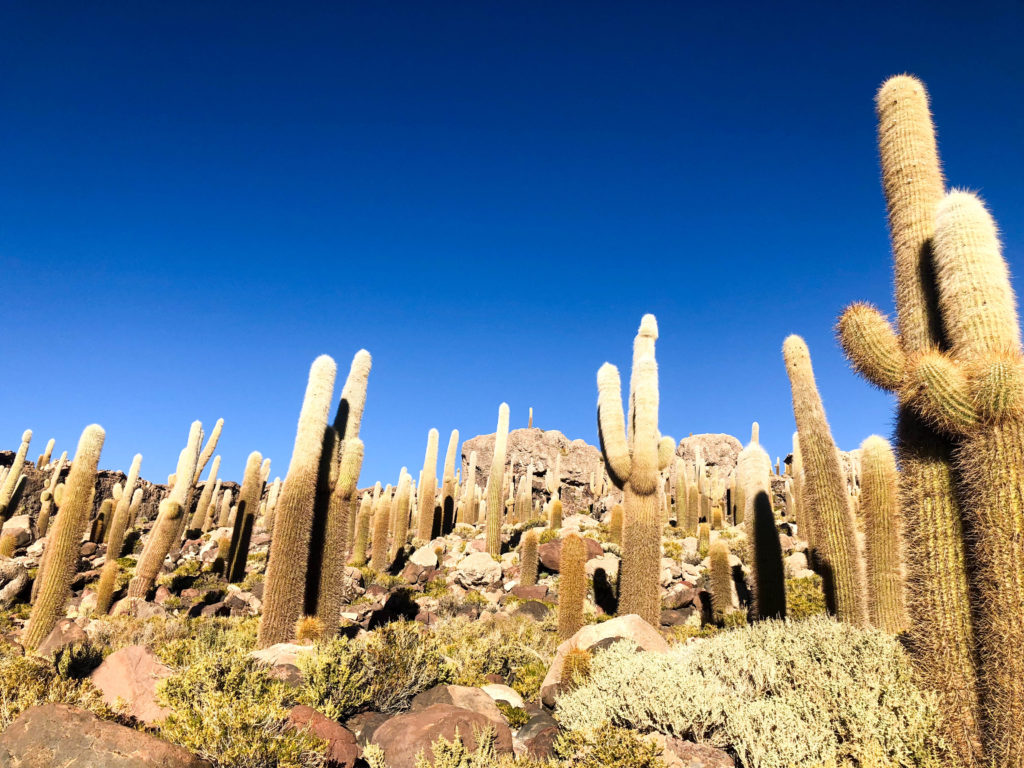 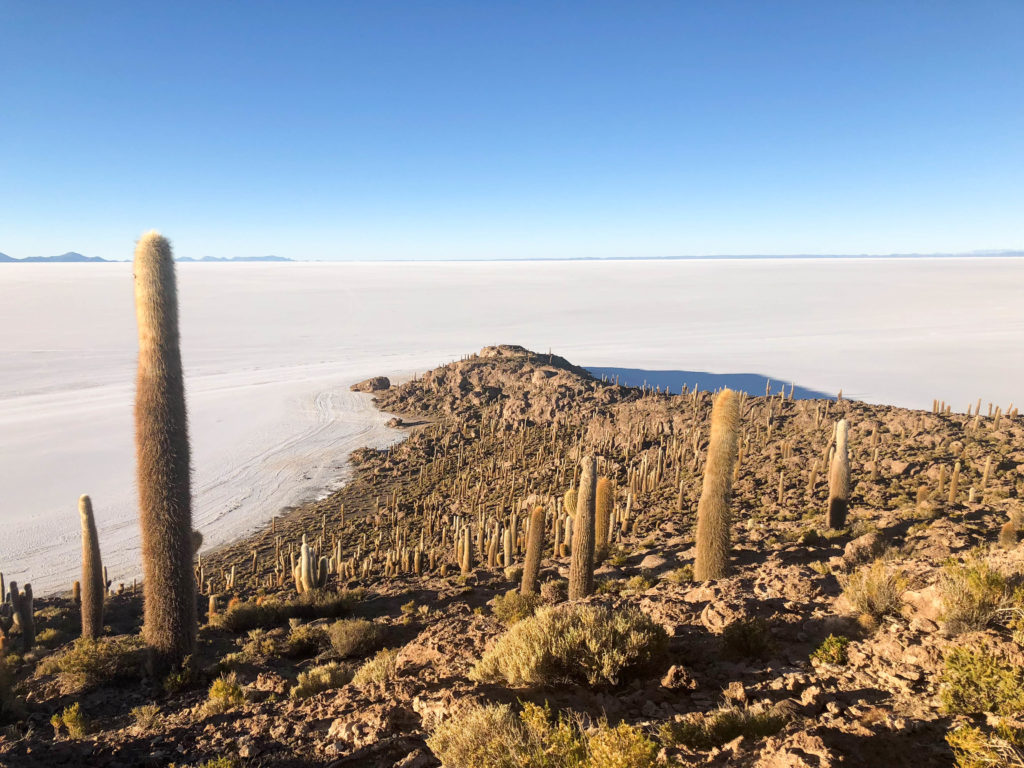 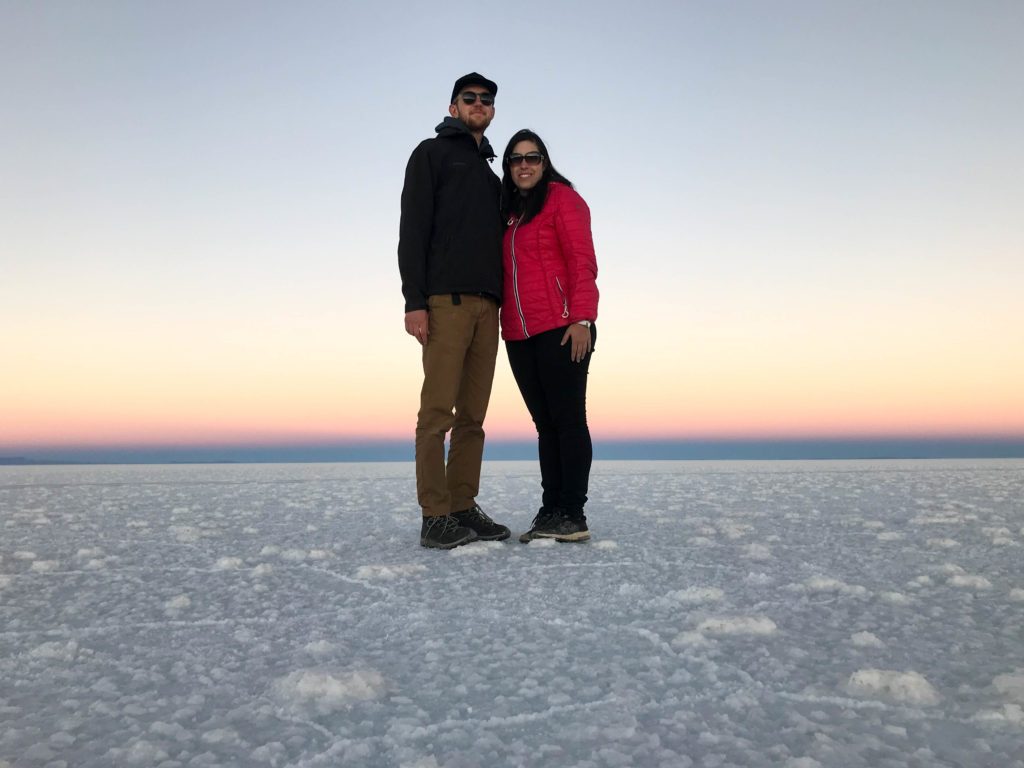