There is just something about Alexandria, Egypt, that makes you like it! Maybe it’s the long promenade, where you can take a stroll and admire the Mediterranean Sea, or it’s one of the cafes where you can sit for a Turkish coffee or shisha and observe people passing by. It could be that it’s a little bit less chaotic than Cairo, but it also has many historical and cultural sites, it’s streets are lively and people friendly. Check out which spots in the city you just can’t miss when visiting.

Beautiful waterfront promenade the Corniche runs from the Citadel of Qaitbay to the Montanza Palace and it’s more than 16 kilometers long. Which means you can take really long walks by the sea. While walking you can admire old buildings, once a glorious site, today in a need of repair, but still beautiful. Along the Corniche there are many beaches, mosques and other important sites. When you get tired from walking, you can relax at the beach or buy some snacks and drinks from the street vendors. If you are up for a good meal, pass the Saad Zaghloul Park – in the streets behind the park there are many great restaurants. I recommend Mohamed Ahmend and Taverna for delicious and cheap meals. 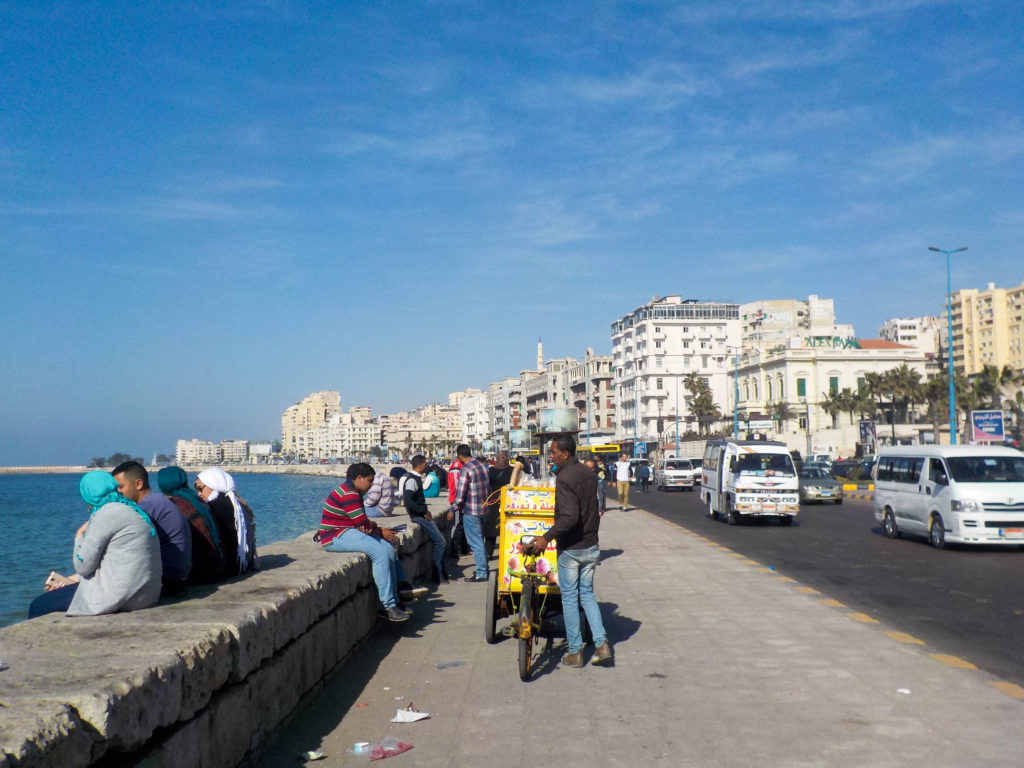 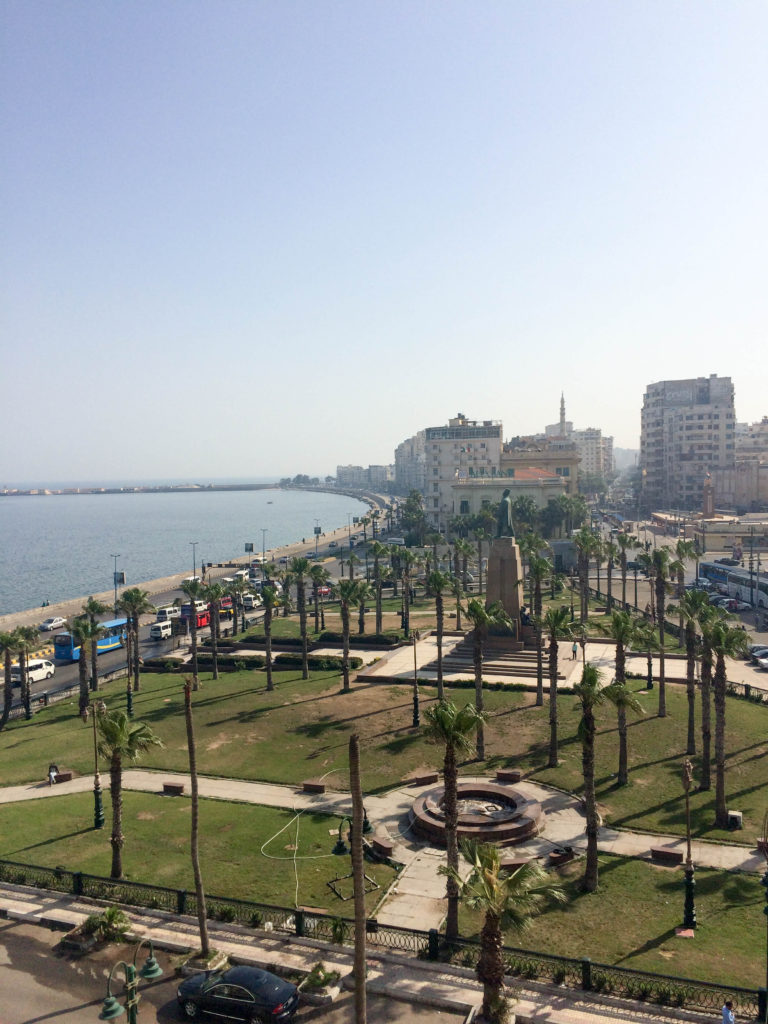 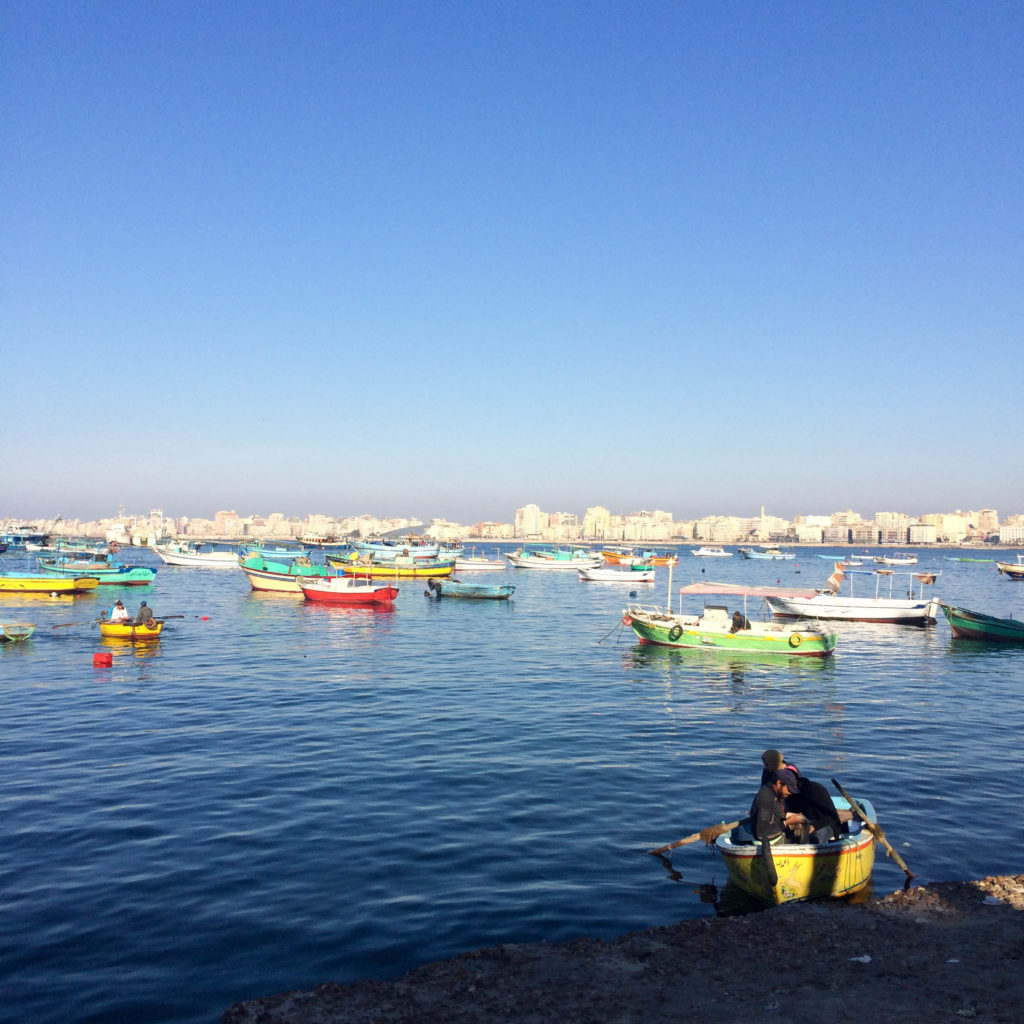 Book lover or not this is a place to see in Alexandria! Its library history goes back to the 3rd century BC when the Royal, also known as the Ancient or the Great, Library of Alexandria was build. It was one of the largest and most significant libraries in the ancient world, but it was unfortunately destroyed in a fire. So in 2002 this new and modern library Biblioteca Alexandrina was opened. The building itself is a masterpiece, its shape is a rising sun half covered in glass and in front of the entrance there is a wall engraved with characters from 120 different human scripts. Inside library has six museums and the largest open air reading space in the world! I recommend you taking a guided tour to visit the library and do make a reservation online before visiting. 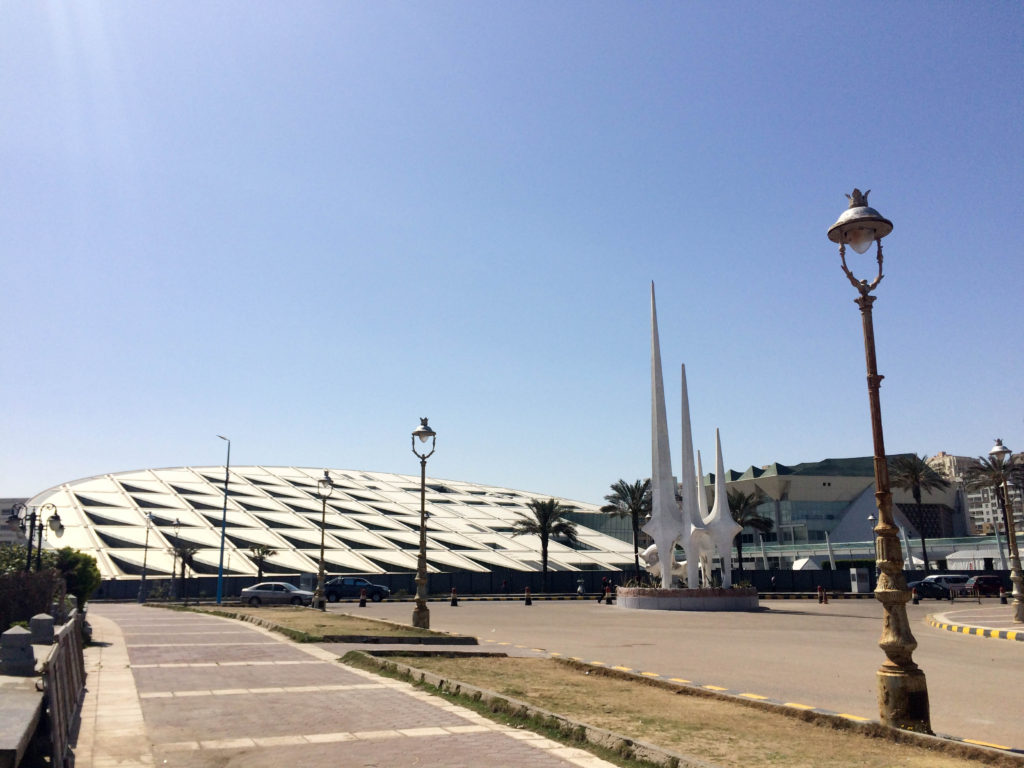 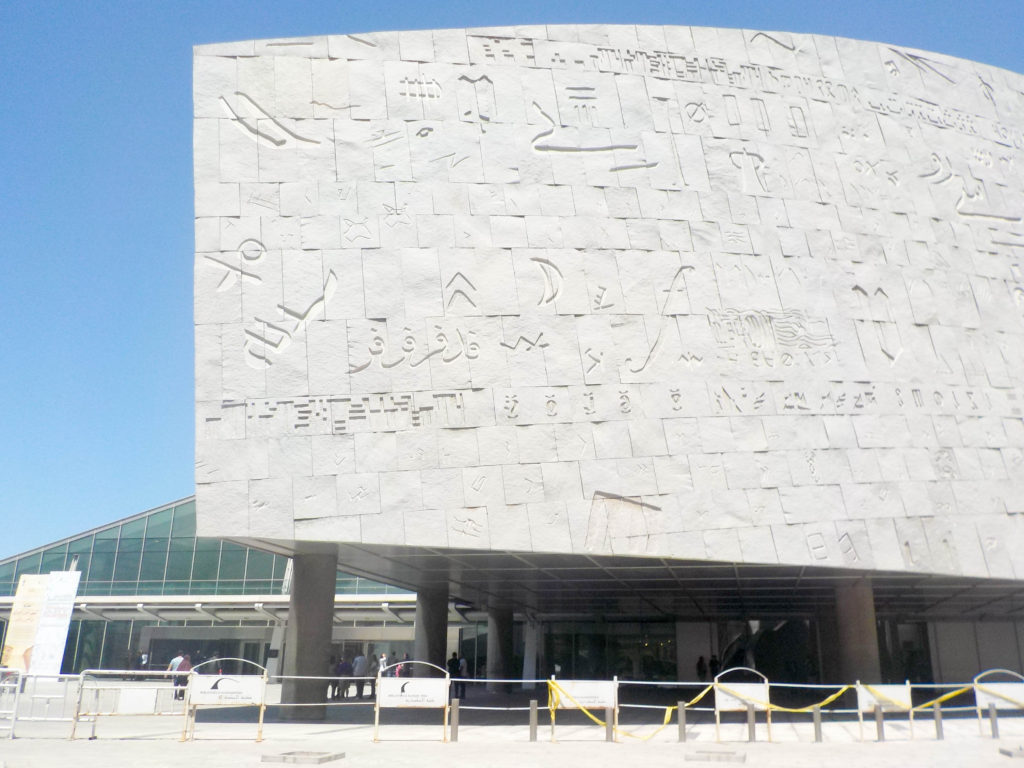 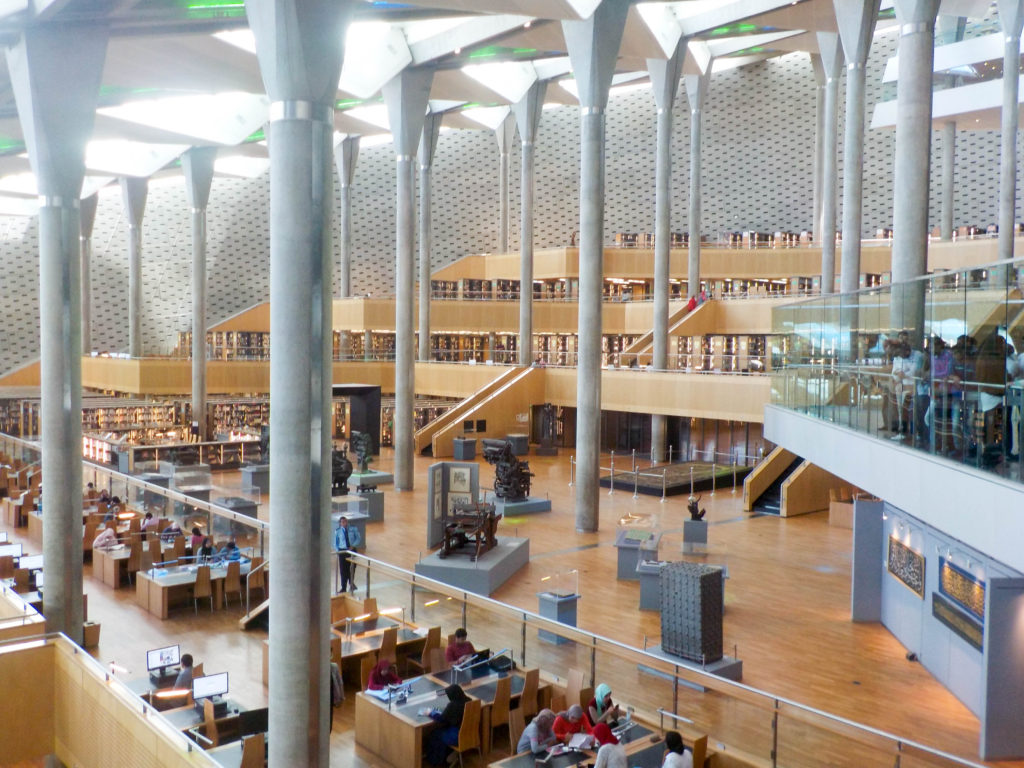 The most famous mosque in Alexandria is dedicated to the 13th century Alexandrine Sufi Abul Abbas al-Mursi. It was built on the site of al-Mursi’s tomb, which is still inside it, and redesigned in the first half of the 19th century. The redesign was influenced by the Old Cairo buildings and mosque is beautiful outside and inside. There is a separate entrance for women, but I was able to peak into the men’s part to see the mihrab and decorated ceiling with chandeliers. 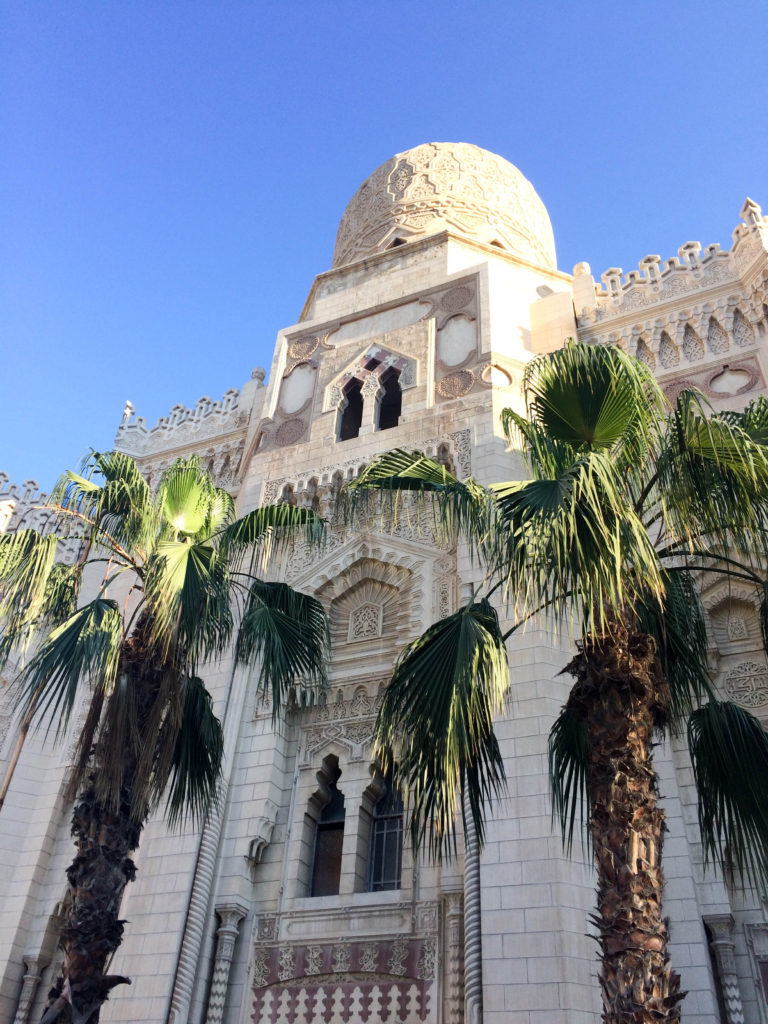 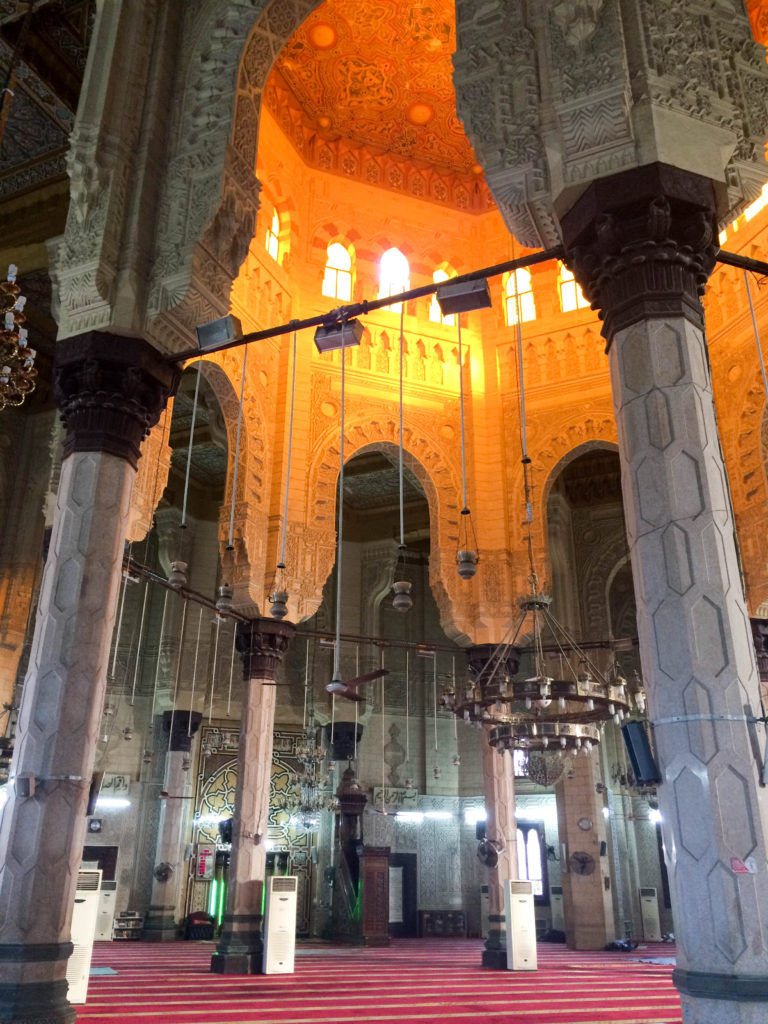 This 15th century defensive fortress was built on the side of the famous Lighthouse of Alexandria, which was one of the Seven Wonders of the Ancient World. It is situated at the Eastern Harbor and it’s a popular place for the locals to hang out. When we visited there was also a market with souvenirs in front of the Citadel. 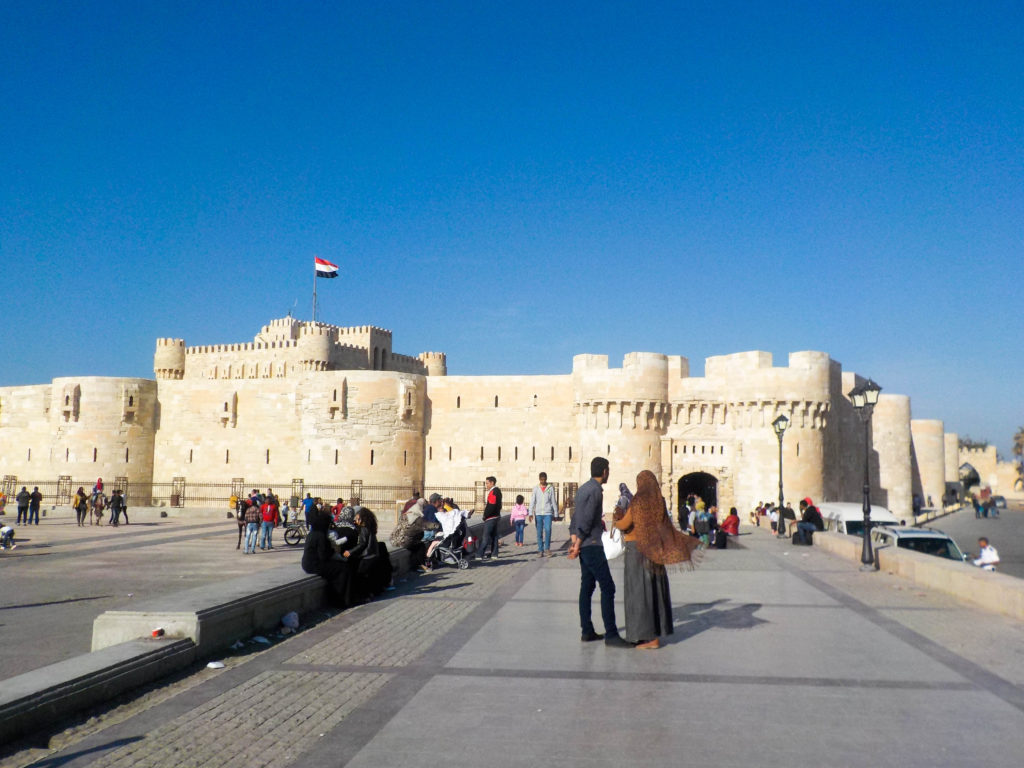 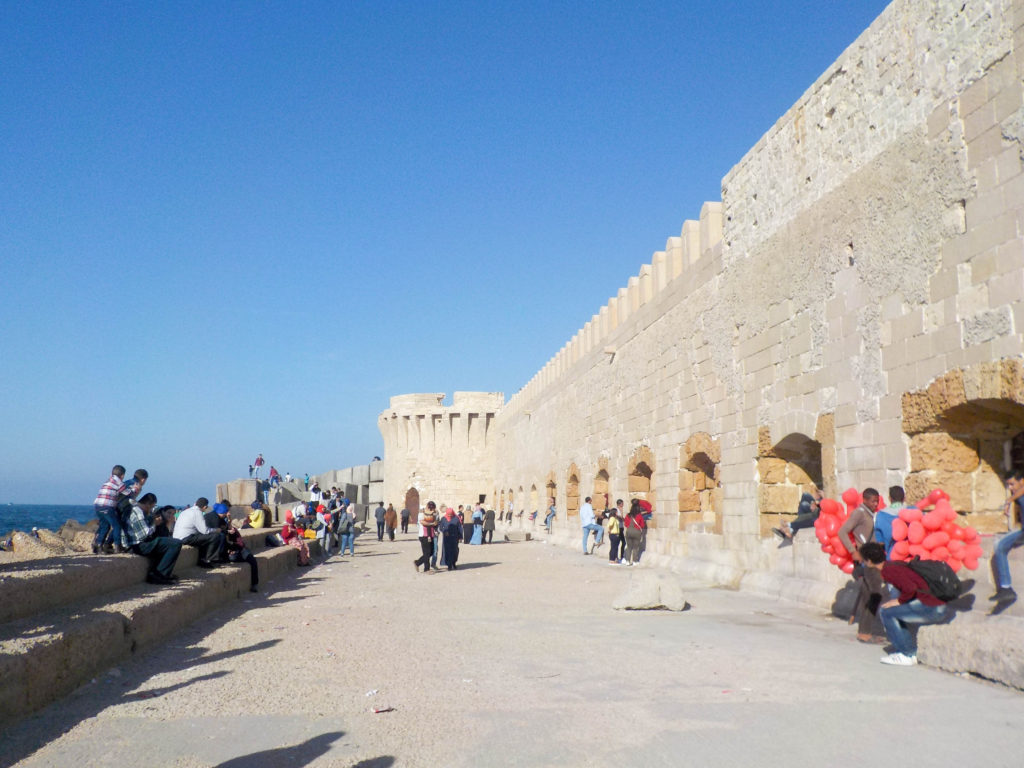 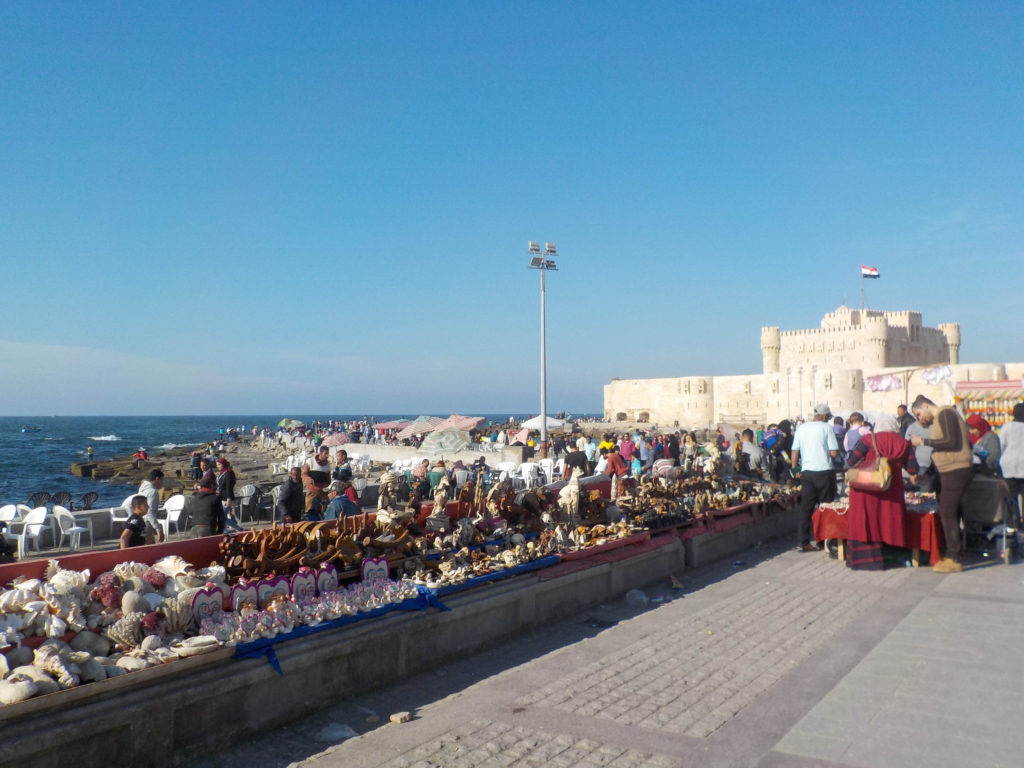 Pompey’s Pillar is one of the largest ancient monolithic columns in the world and the largest in Egypt. It’s almost 27 meters high and made from red Aswan granite. It was built as a memorial to Diocletian in an ancient settlement of Rhakotis, the town from which Alexandria grew. Its archeological site also holds ruins of the Temple of Serapeum and the Temple of Serapis, which you can visit beneath the pillar. There are two statues of sphinxes guarding the pillar. It is said that this was the place of the daughter library of the Great Library of Alexandria and they stored copies of the texts here. It’s interesting to see how this archeological site is surrounded with block of flats, built the Egyptian way, with unfinished rooftops and partly done facades. 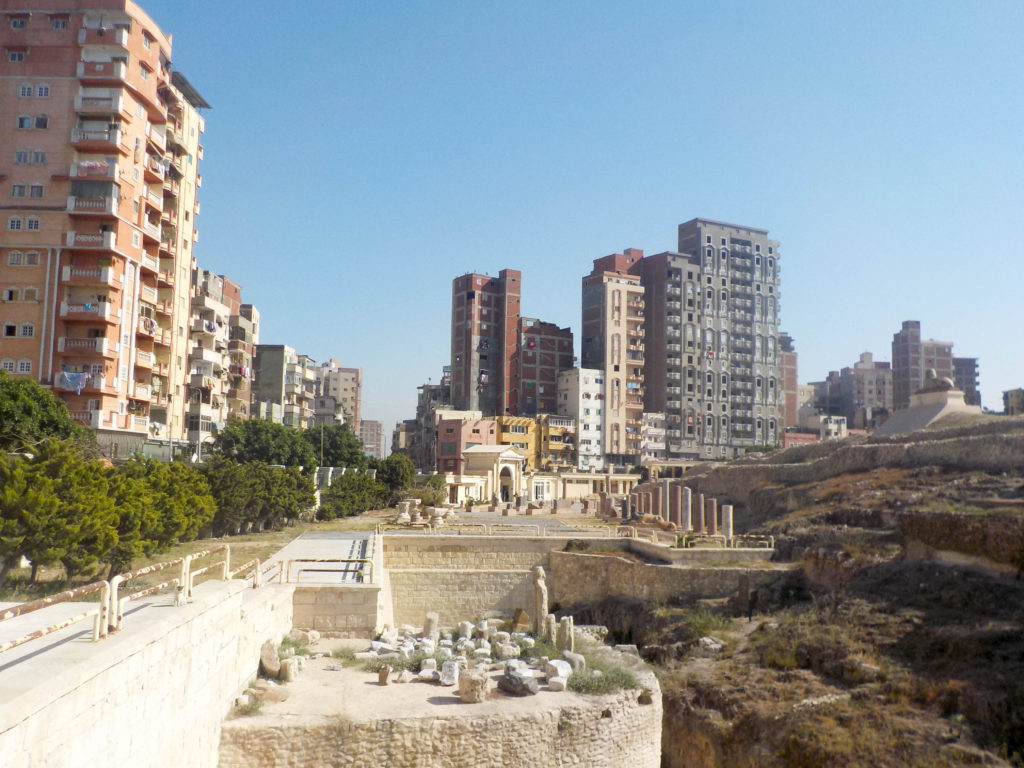 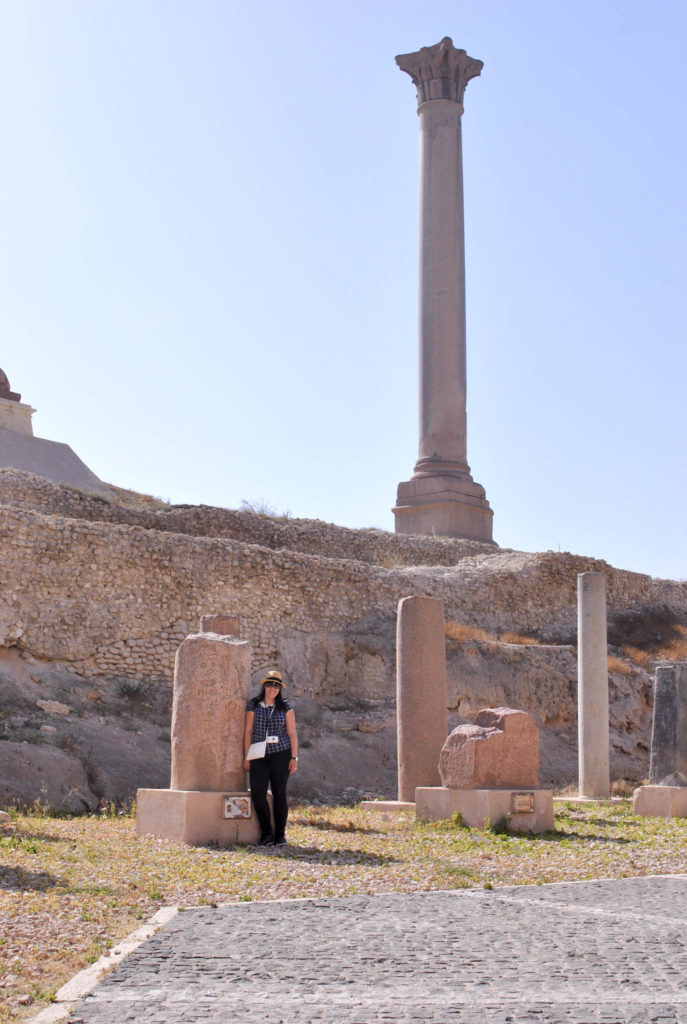 If you want to get to know the history of Egyptian Muhammad Ali Dynasty, which ruled the country from 1805 to the Egyptian revolution in 1952, a little bit differently, visit the Royal Jewelry Museum. More than 11 thousand pieces of jewels and jewelry are on display in a beautiful palace of Princess Fatma al-Zahra’, along with the collection of the 19th century paintings, statues and decorative arts. The palace itself was built in 1919 and it is surrounded by gardens. 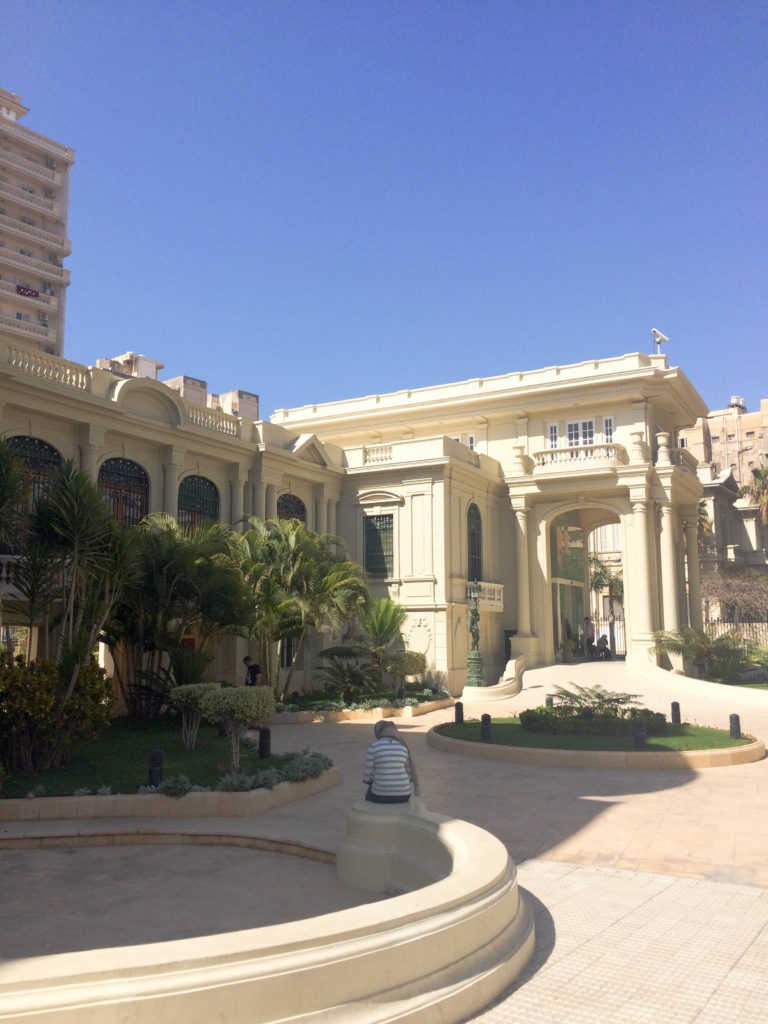 Alexandria’s green oasis is a 61 hectares big area, named the Montaza Palace Gardens, where Egyptians go for a picnic in a park or for a relaxing day at the beach. The whole complex has many hotels and restaurants but also two palaces. First is the Salamlek Palace, built in 1892, which is today turned into a hotel. More known is the larger Al-Haramlik – Motanza Palace, built in 1932 in Turkish and Florentine styles. Today is a museum of the Muhammad Ali Dynasty family. We visited the gardens on a public holiday, so all the shadows beneath the palm trees were occupied. 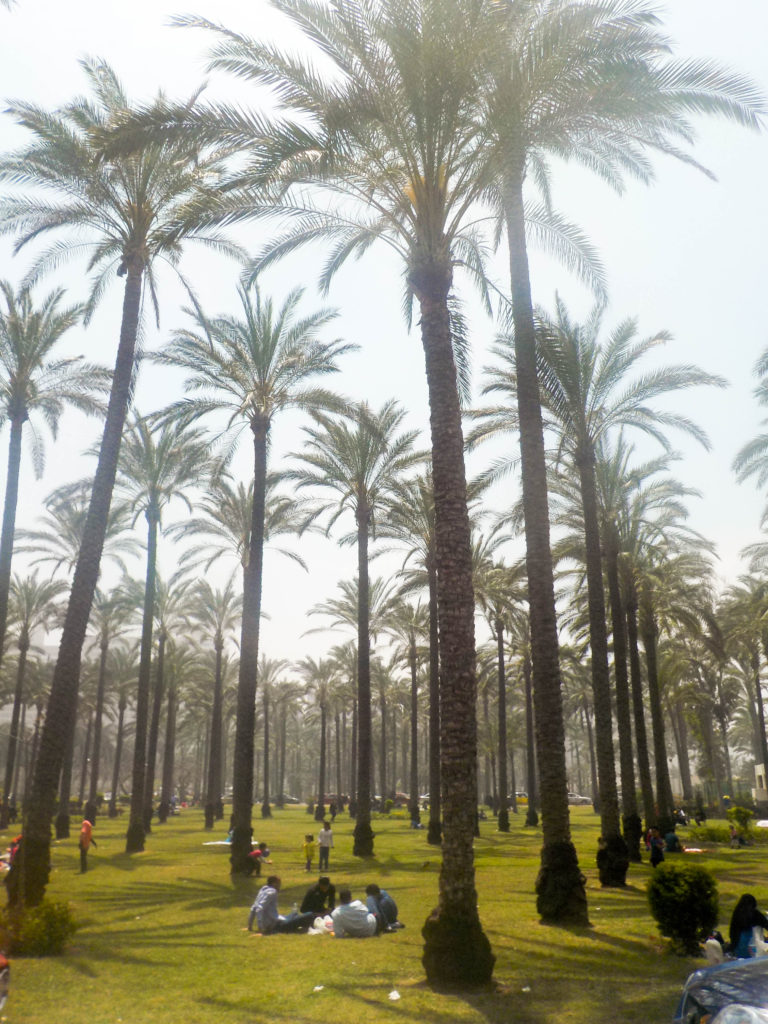 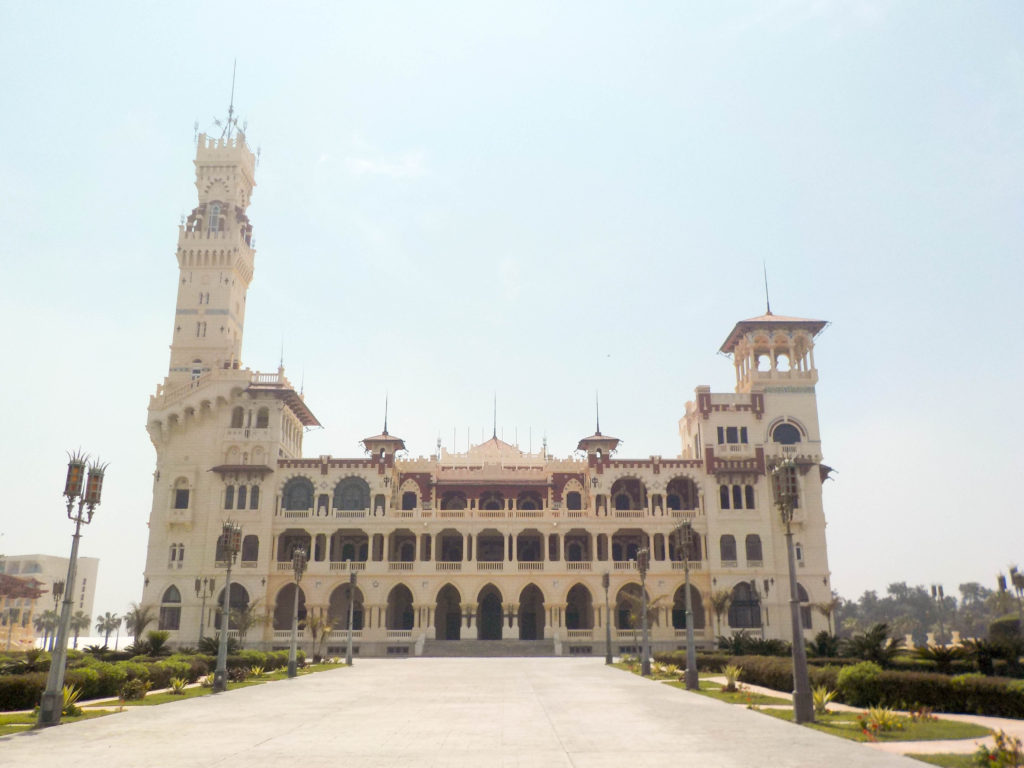 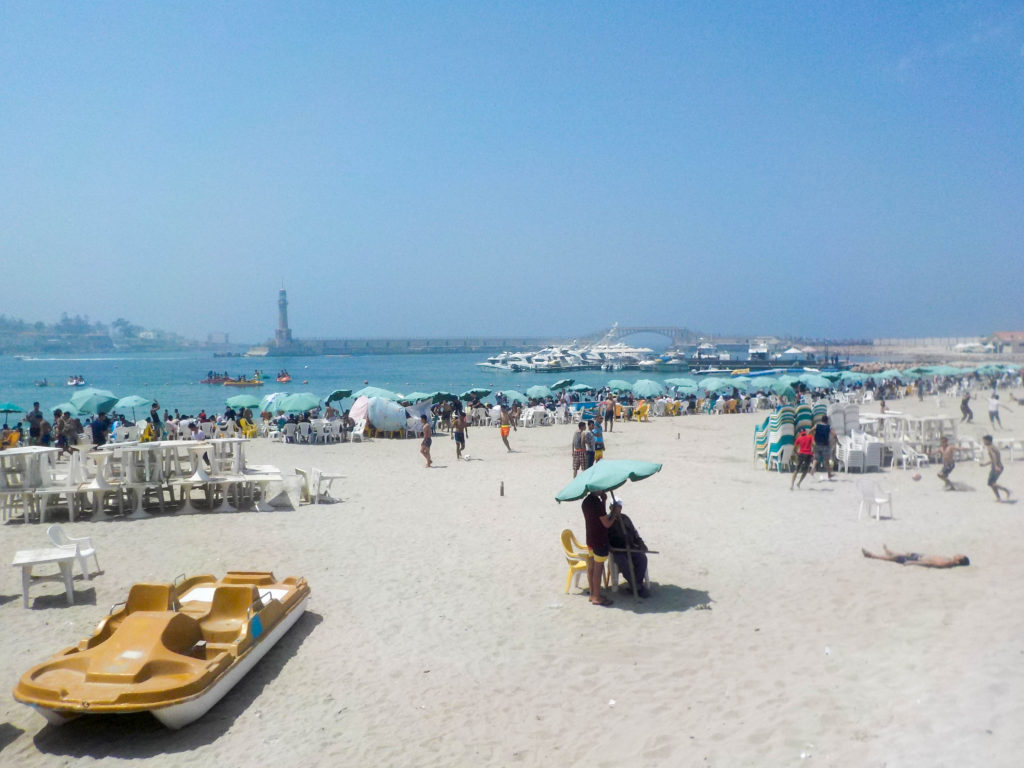