Head to the north of Iberian Peninsula for an eight days long road trip, on which you will visit all the most important Basque country cities in France and Spain and four Spanish cities in neighboring autonomous communities. Try typical Basque, French and Spanish food, admire gorgeous views and do some sunbathing and swimming. If you have more time to spend in Spain, check out this 5 best less-known Spanish cities.

Let’s see the map of the road trip. 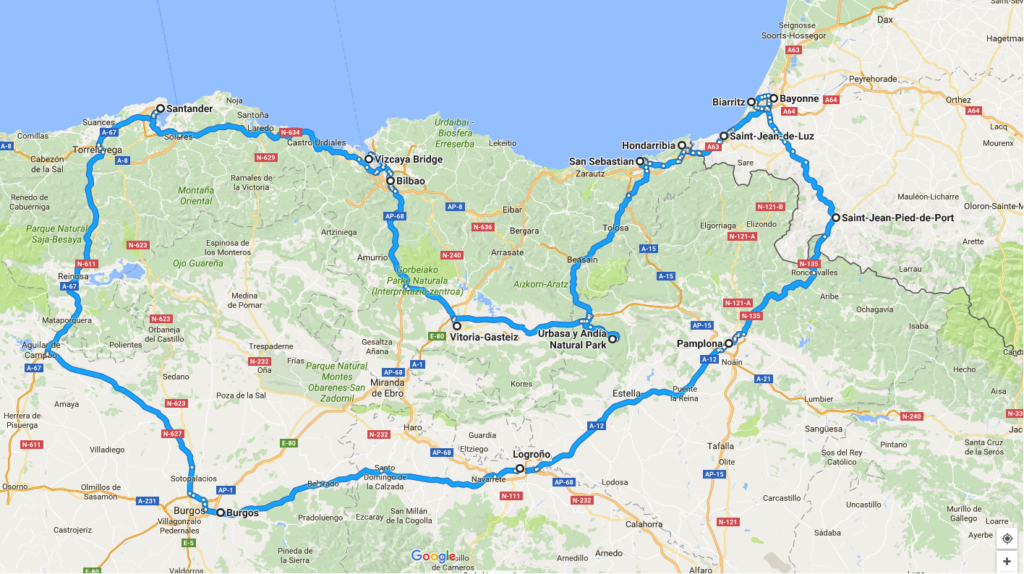 Your starting and finishing point will be Bilbao, Spain, because there are many flights serving the Bilbao Airport every day, also some low-cost airlines. You can rent a car at the airport and drive to the capital of the Spanish Basque country Vitoria-Gasteiz. Go and eat some delicious Basque tapas – pintxos for dinner. If you are travelling in the end of July, do visit the city in the time of the festival la Día de Blusa y Neska, which translates to the day of the blues and the girl. People are dressed in traditional clothes, walking in parade, dancing, singing, playing on their typical instruments, drinking bear and eating pintxos. And they sell garlic on this day. 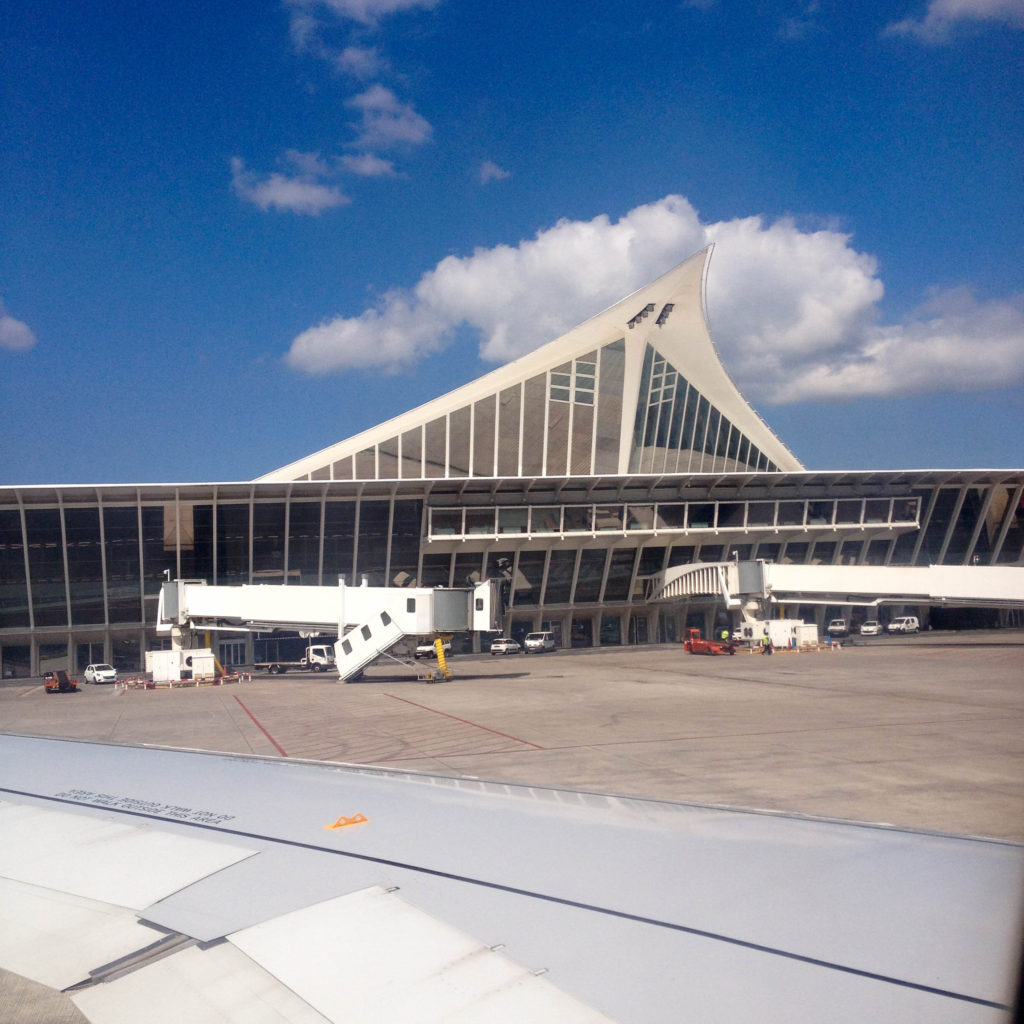 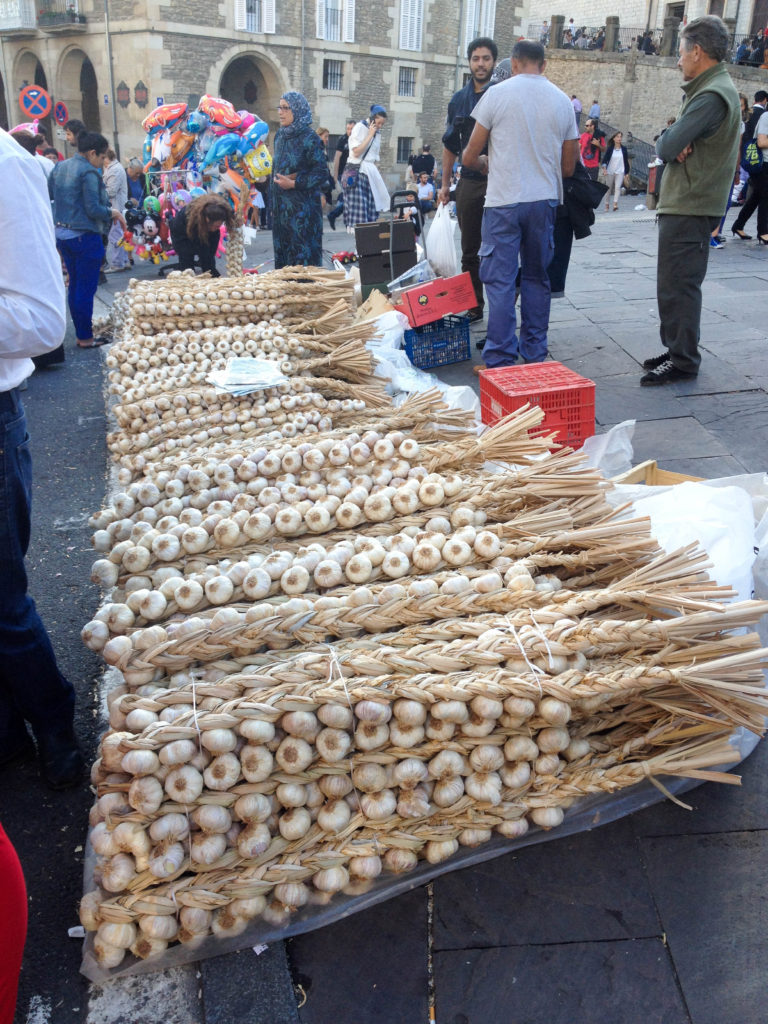 Spend morning sightseeing Vitoria-Gasteiz, then drive through Parque Nacional de Urbasa y Andía. Don’t forget to take a scenic walk, admire the Urbasa’s Meadows, stop at the Pilate’s Balcony and eat some traditional Spanish food like huevos rotos con chorizo (sunny side up eggs, French fries and Spanish sausage). Finish the day with arriving to San Sebastián, which is called Donostia in Basque language. Eat pintxos (again) for dinner, because San Sebastián is known for having the best ones. In the Old Town every bar has different pintxos to choose from. 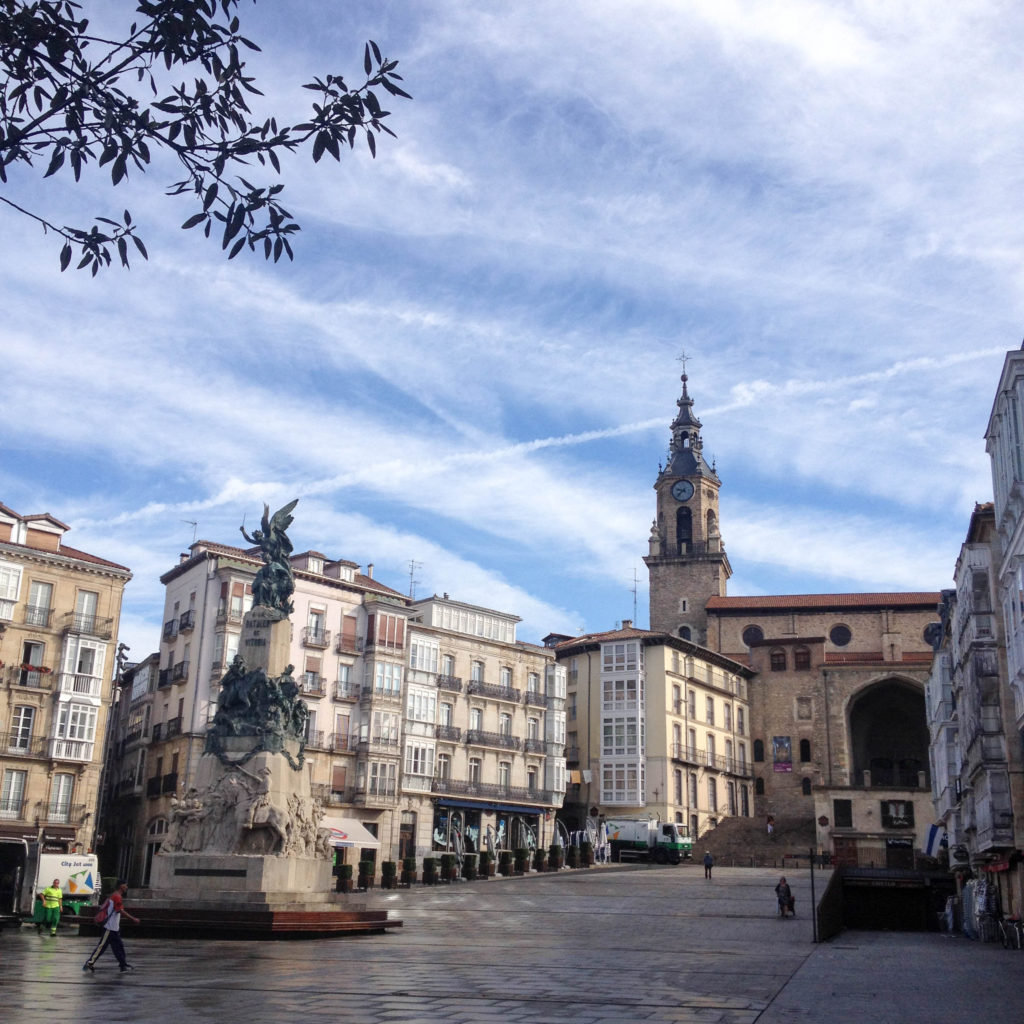 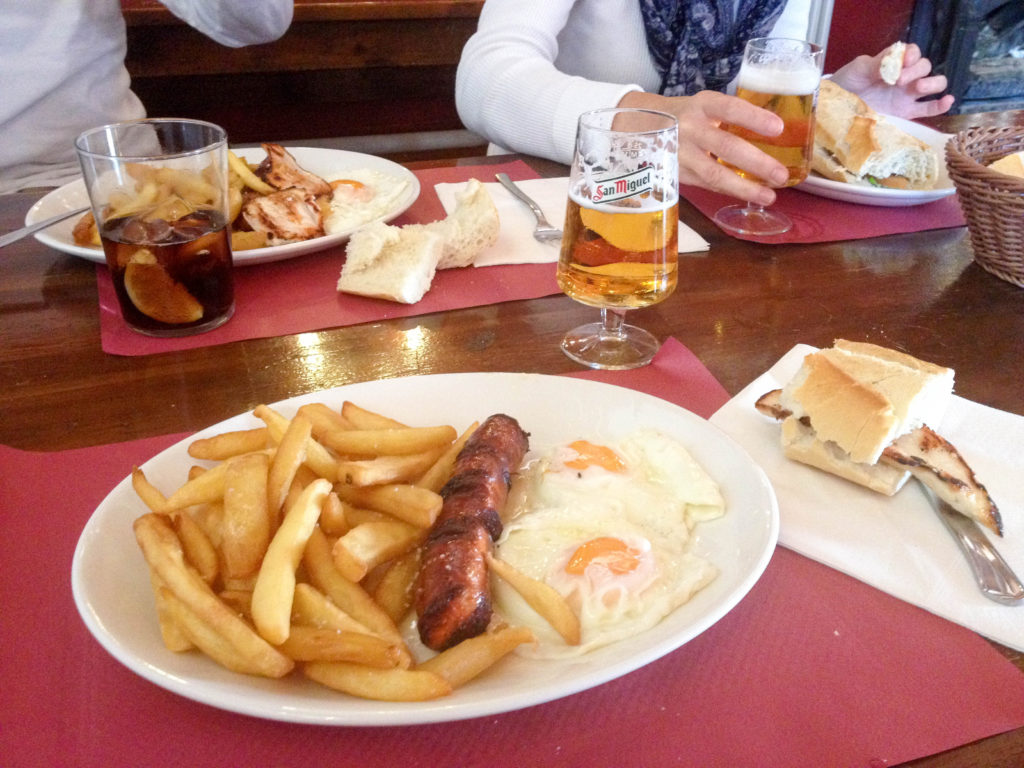 Walk through the Old Town of San Sebastián, stroll the promenade past Miramar Palace and take the funicular to the top of Monte Igueldo. What a view! If you are visiting in summertime, head to the beach. In the eastern part of the town there is also a beach for surfers. Drive from San Sebastián to Hondarribia and eat lunch in the Marina neighborhood,  then cross the river and enter France. Make the first stop in picturesque Saint-Jean-de-Luz. Get dessert, the typical Basque pie or French macaroons in one of many bakeries. Admire little white houses with red shutter, drying peppers hanging from the windows, espadrilles in shops, sandy beaches and high prices. End the day with discovering Bayonne, city known for its ham and chocolate. 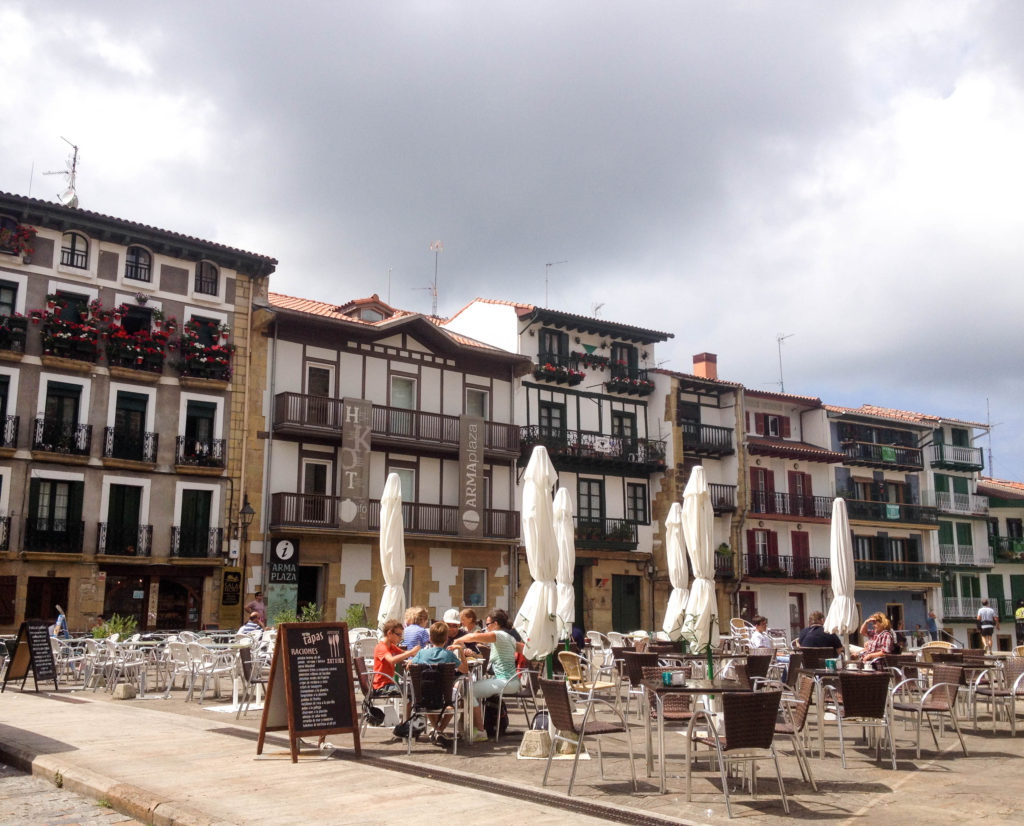 Biarritz is just 15 minutes drive from Bayonne, so have a typical French breakfast croissant, French baguette with butter and marmalade, coffee and freshly squeezed orange juice in this luxurious seaside destination. Walk along the most famous beach Grand Plague, dip your legs in the Atlantic Ocean and don’t buy any souvenirs here, because it’s really an expensive city. Do go to the market, it’s full of French delicacies. Continue your way to the mountains and Saint-Jean-Pied-de-Port, where is the start of the pilgrim route Santiago de Compostela. Then is time to head back to Spain, not leaving only France behind but also the Basque country with entering the Spanish autonomous community of Navarre. 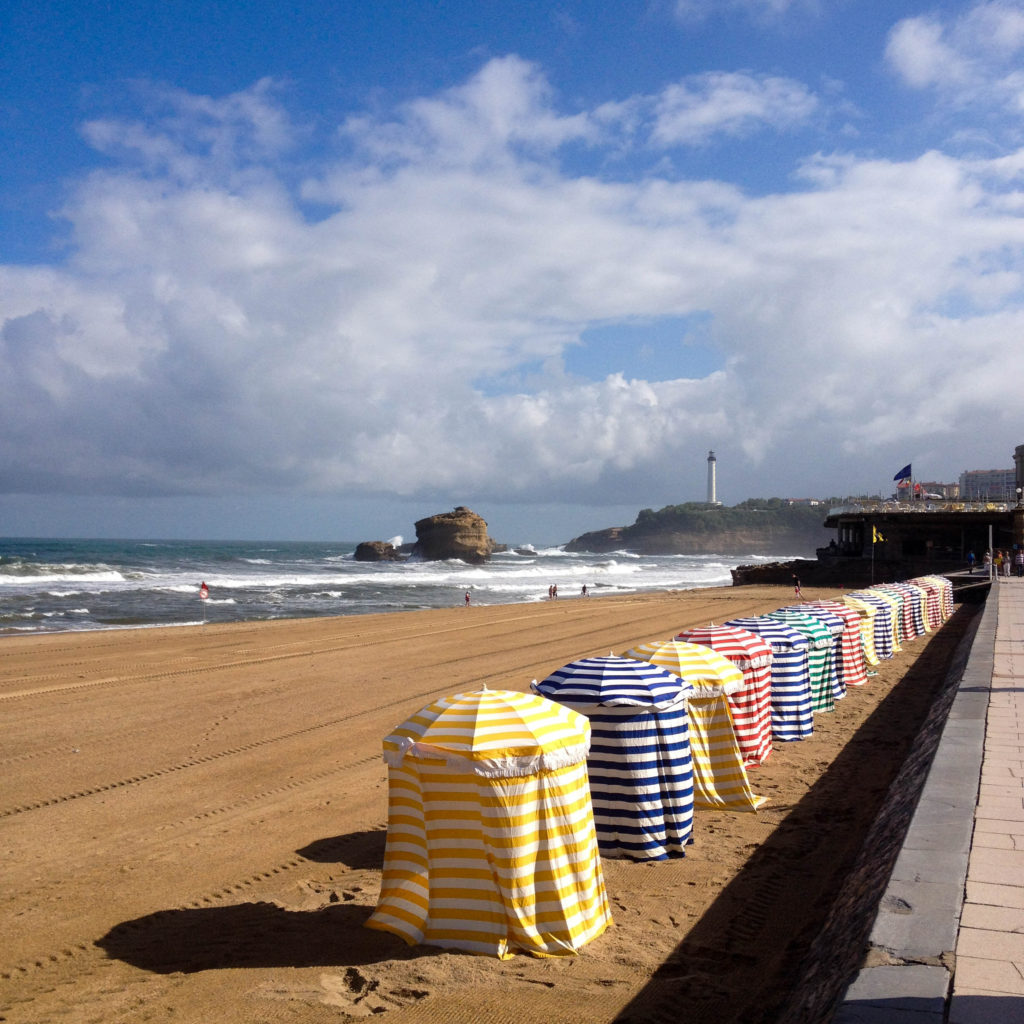 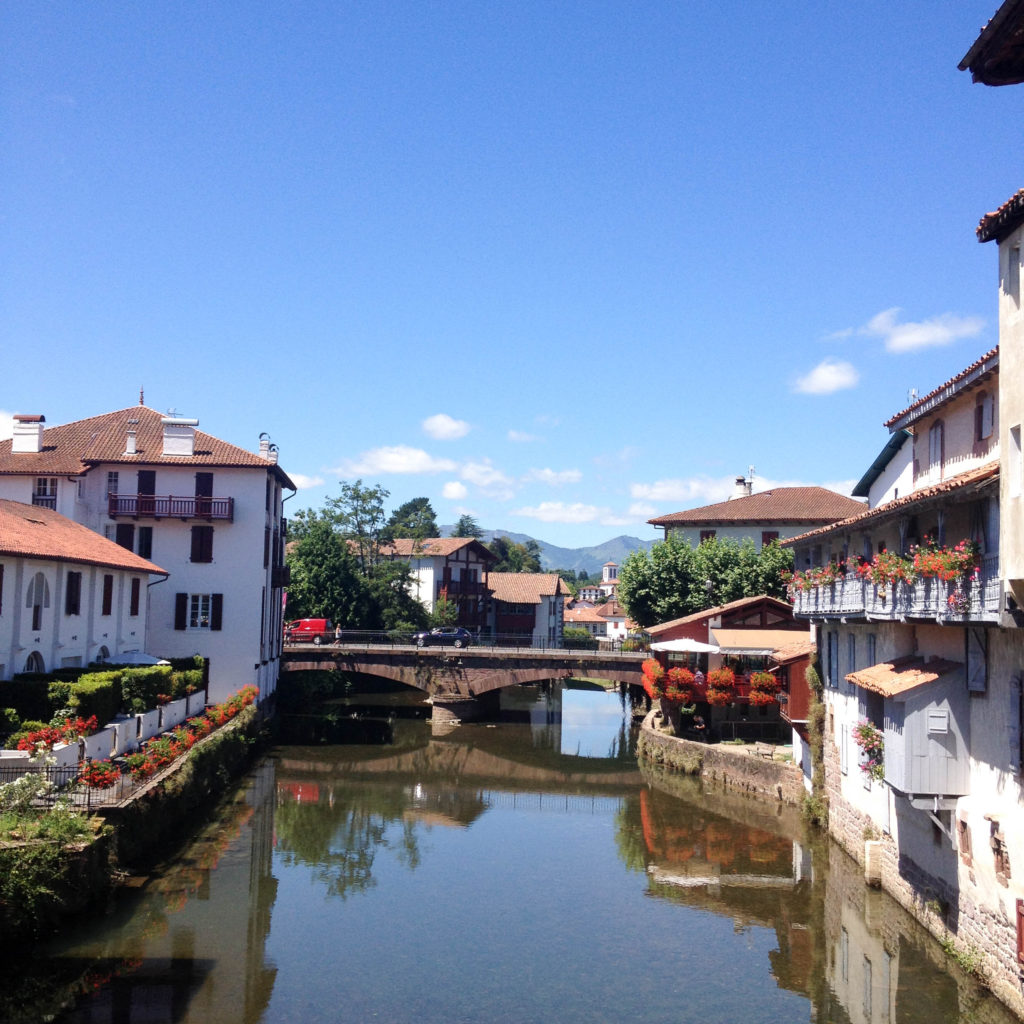 Begin the day with sightseeing of “run with the bulls” Pamplona city and visiting all the main sites: Plaza del Castillo, town hall, cathedral, city walls, bullfighting ring and monument, la Ciudadela. Then head to Logroño, the capital of autonomous community La Rioja, known for being one of the best wine production regions in the Spain. Go to the wine museum where you can try all the wines from the region. But drink moderately, you still have to drive to Burgos. 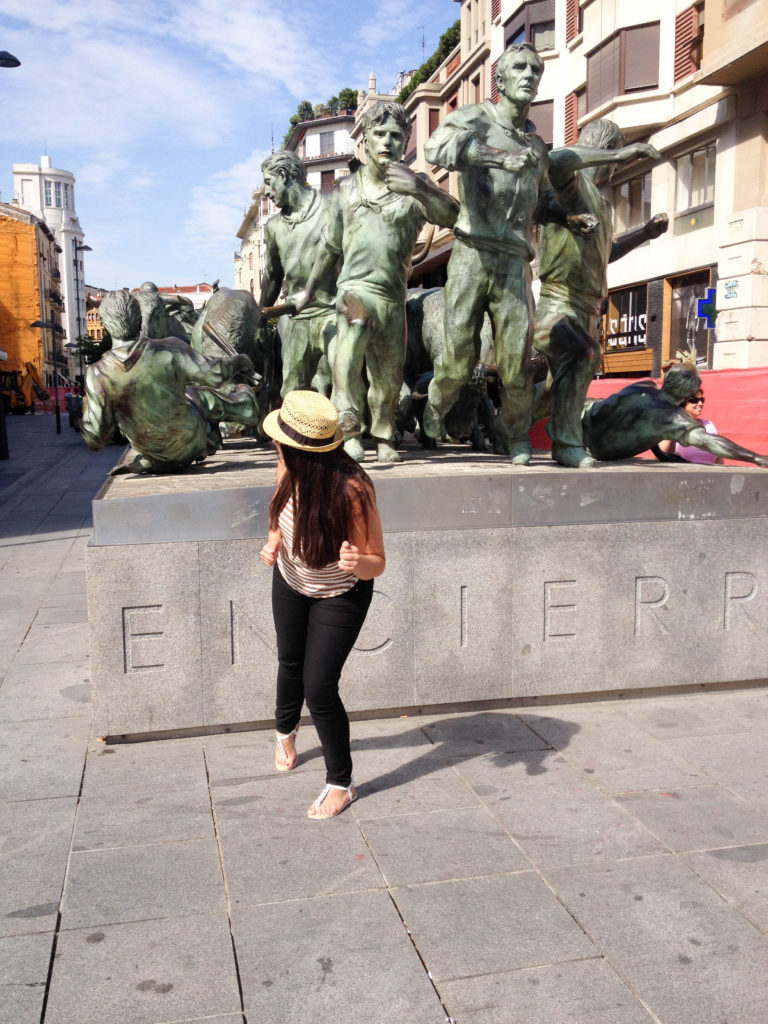 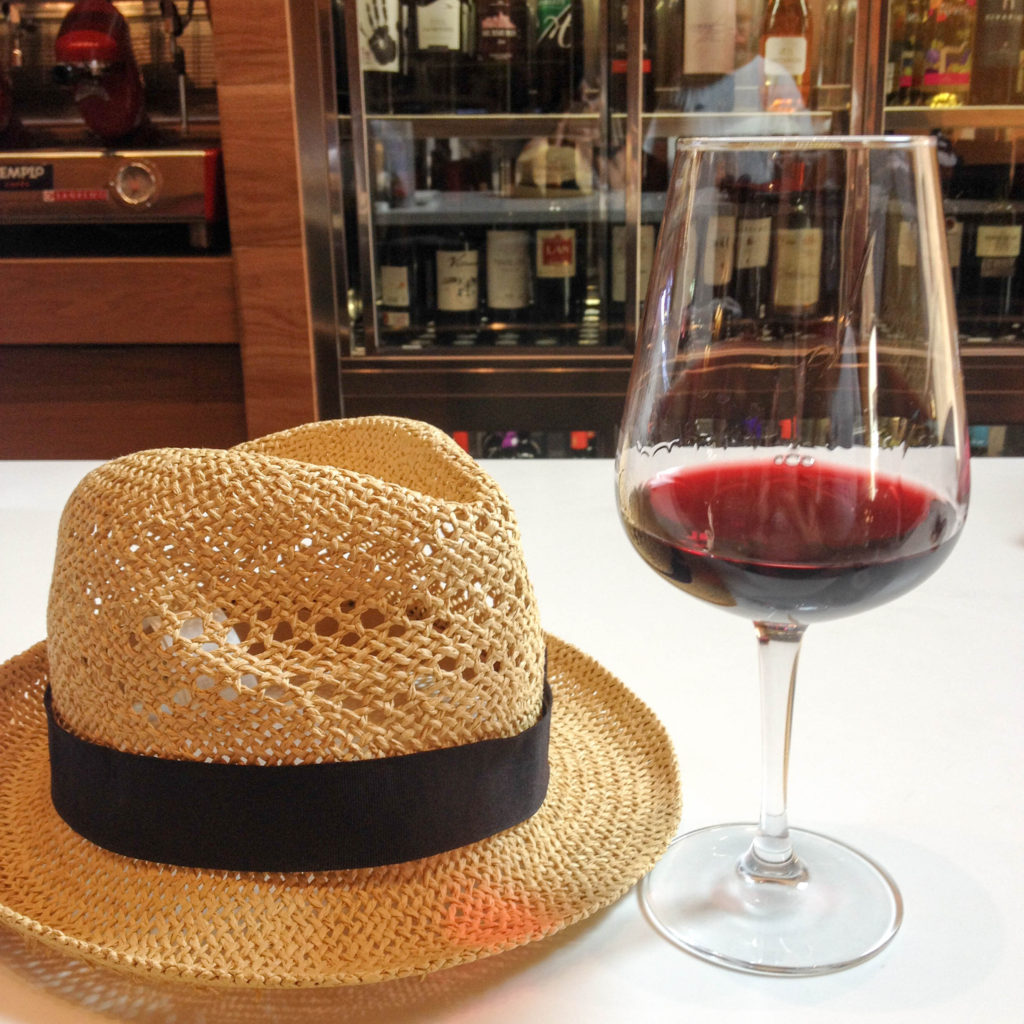 Burgos is a city in the Castile and León autonomous Spanish region. Here you have to climb to the Castle Hill for an amazing view of the city and the cathedral. If you haven’t eaten tapas in 100 Montaditos yet, here is your chance. Continue your trip to the city Santander, the capital of autonomous region Cantabria. Have churros con chocolate for breakfast or dessert. 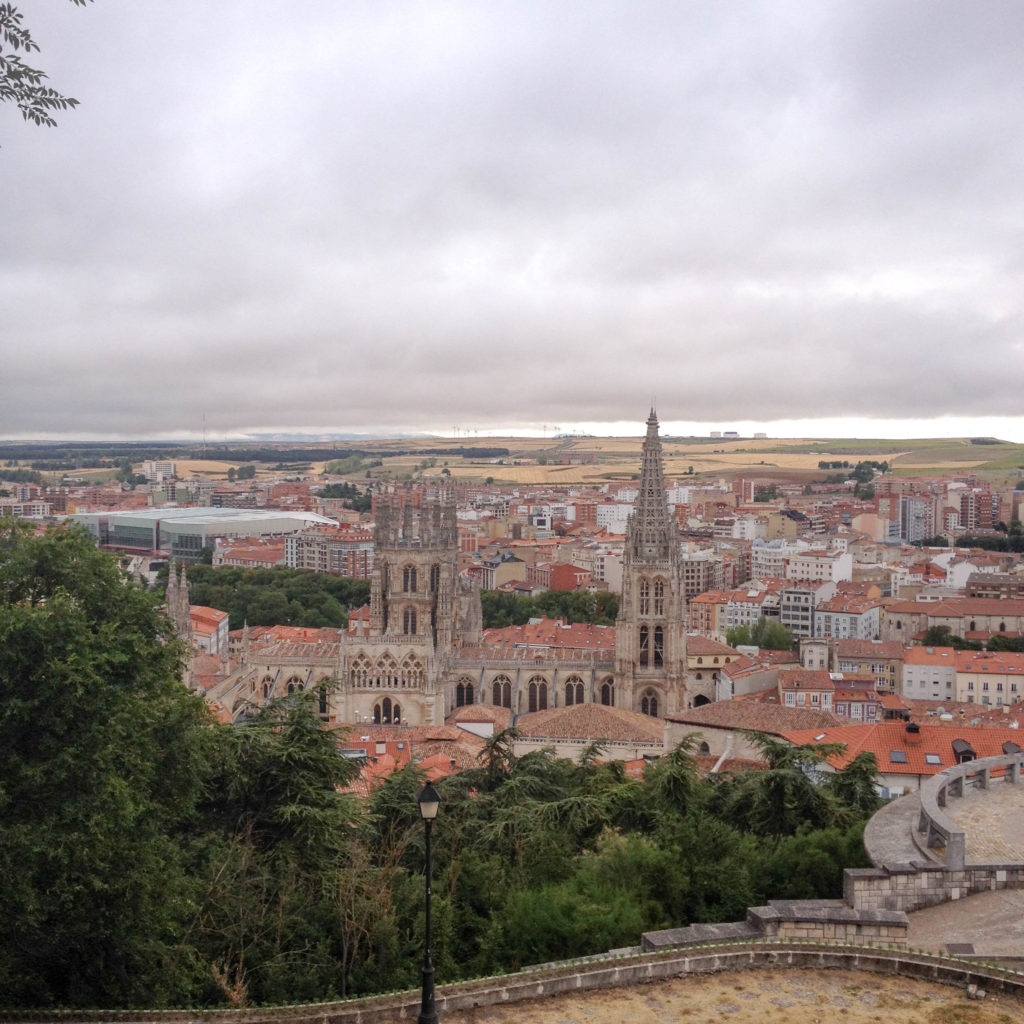 Santander has beautiful beaches, but you also have to walk through its Old Town and visit the Península de la Magdalena, where Palacio de la Magdalena stands. This beautiful palace used to be a holiday house for the Spanish royal family. It is surrounded by park and a part of peninsula is turned into a small zoo. Here you can try another typical Spanish dish – sarten de gulas. Head back to the Basque country towards Bilbao and make a stop at Puente de Vizcaya. This is the first hanging bridge in the world, it was built in 1893 and it still carries cars and people from one shore of river Nervión to another. 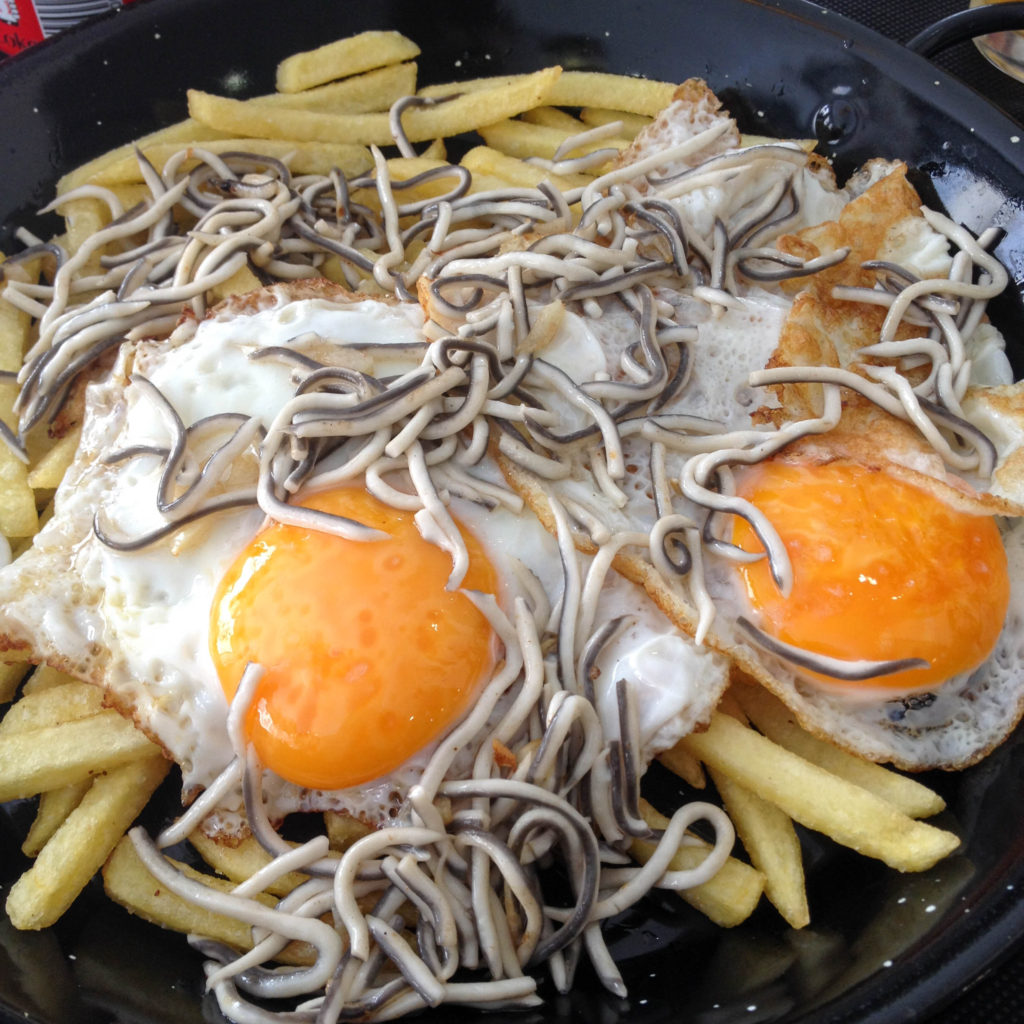 Mix of modern and traditional buildings makes a great atmosphere in Bilbao. Don’t miss out on exhibition of contemporary artists in the Guggenheim Museum and take a funicular to one of the surrounding hills for a perfect view of the city. In the evening it’s time to head home. 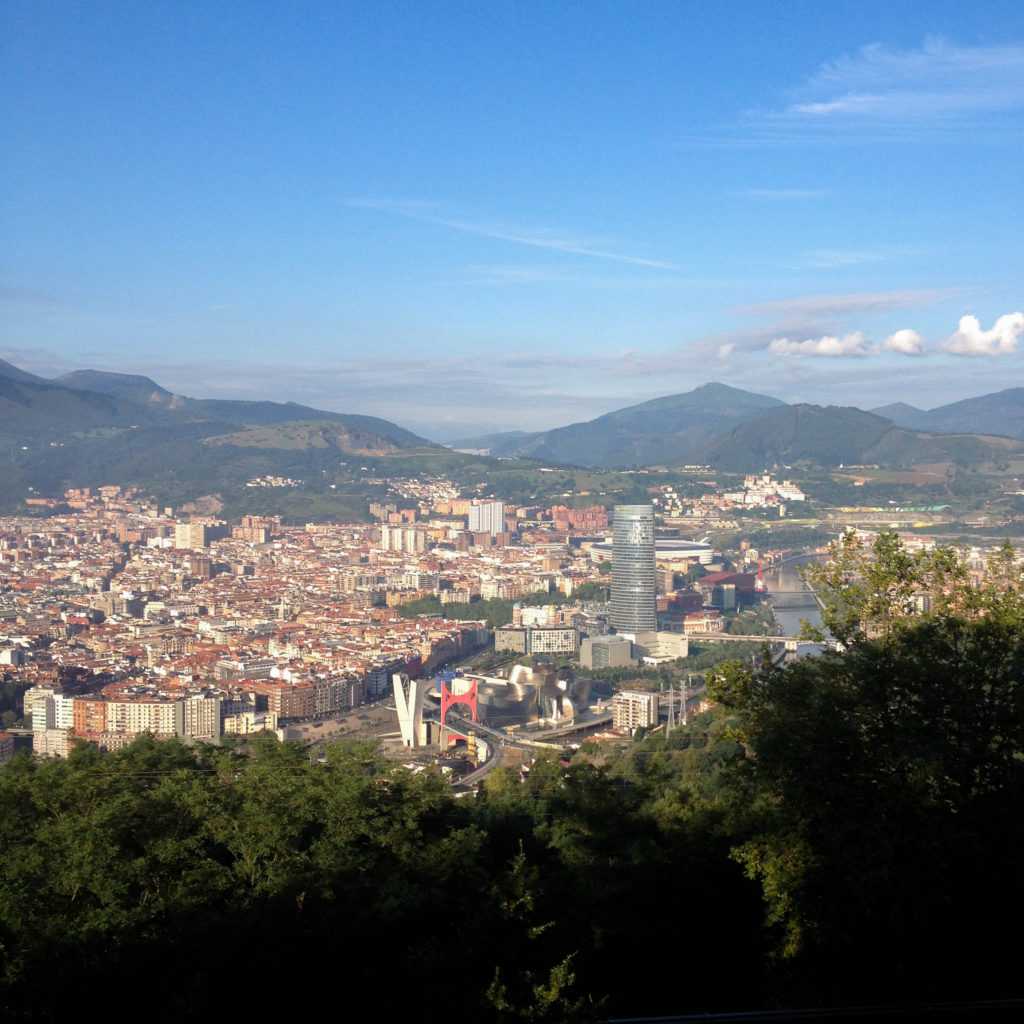 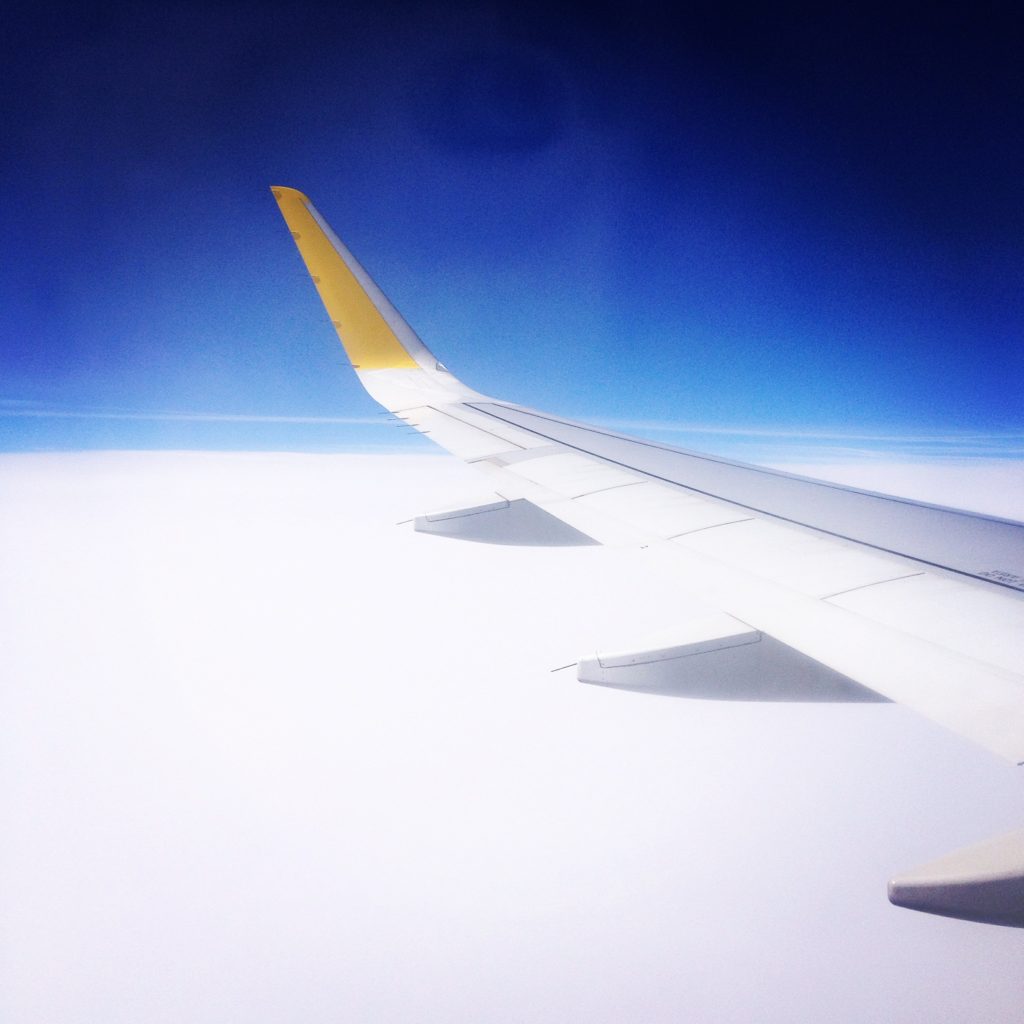