I didn’t plan to go to Delta El Tigre, however, when my newest friends in hostel in Buenos Aires, Argentina, told me it’s a beautiful place I can’t miss visiting I decided to give it a try. And it was also last sunny summer day of my travels through Latin America, so it turned out to be a perfect destination to escape the city heat.

I honestly didn’t take time to look up anything about Delta El Tigre and went on a trip equipped with information people from hostel gave me. Which was: go to the Retiro railway station, take cheap and just an hour long train ride to El Tigre, when arriving to the city take a boat to a round walking tour, eat lunch in a nearby restaurant and don’t get lost as we did.

First problem was that Retiro has two railway stations one next to the other and of course firstly I tried to buy a train ticked to El Tigre in the wrong one. For your information, you have to go to the Estación Retiro Mitre and there are trains to El Tigre every 15 minutes or so. Once I was in El Tigre it was relatively easy to find the port Estación Fluvial, I just had to cross the street from the train station.

However, there awaited me many tourist agencies offering different Delta cruises with lunch packages, discovering the Delta’s animal life etc. I was confused – didn’t my friends say I have to take a boat and at some point get off it to take a hike? I didn’t know how to proceed so I went to the Tourist Information Office which I almost never do! The only other time I remember visiting tourist centre was in Delft, the Netherlands, when I didn’t know which pottery factory was the best to visit. But let’s go back to Argentina. The lady at the Tourist Information luckily knew where I wanted to go. She even gave me a map of the Delta of Paraná River area. It’s huge, 14 thousand square kilometres big! 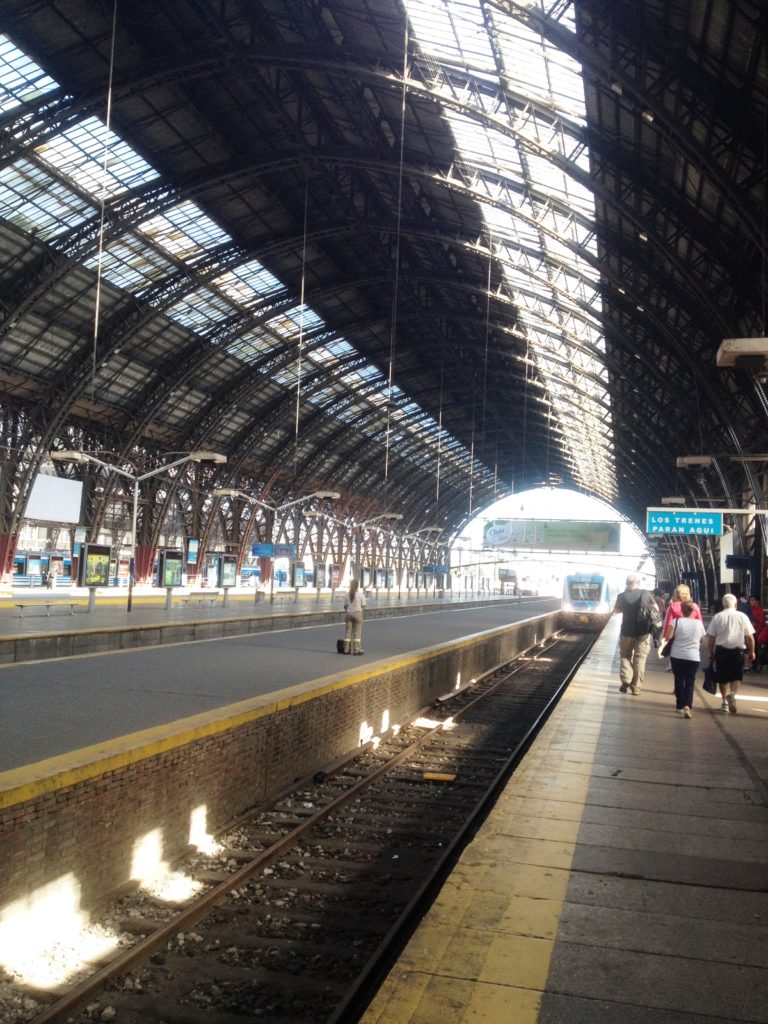 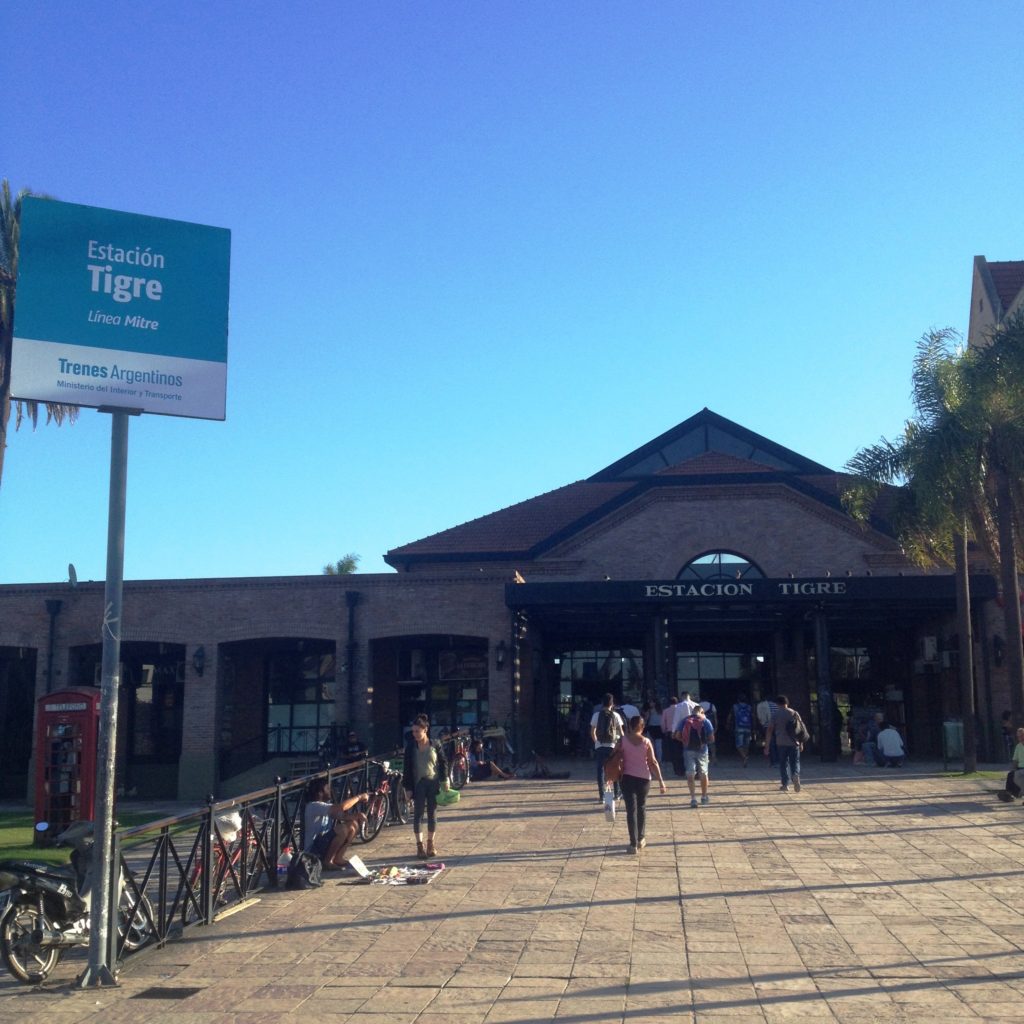 So I knew now that I was headed to the island Tres Bocas.

The island is accessible by the bus boat of company named Interisleña. I went to buy the ticket at the port and embarked approximately 40 minutes long boat ride. The ride introduced me to a beautiful Delta El Tigre, full of river affluents, interesting flora and houses with their own quays for the boats and kayaks, because there are no roads in the Delta area. I noticed that the boat doesn’t stop at every quay, there were no station maps or timetables of departures or arrivals to the destinations. So I asked the ship’s captain where to get off the boat and he kindly reminded me when it was my stop. 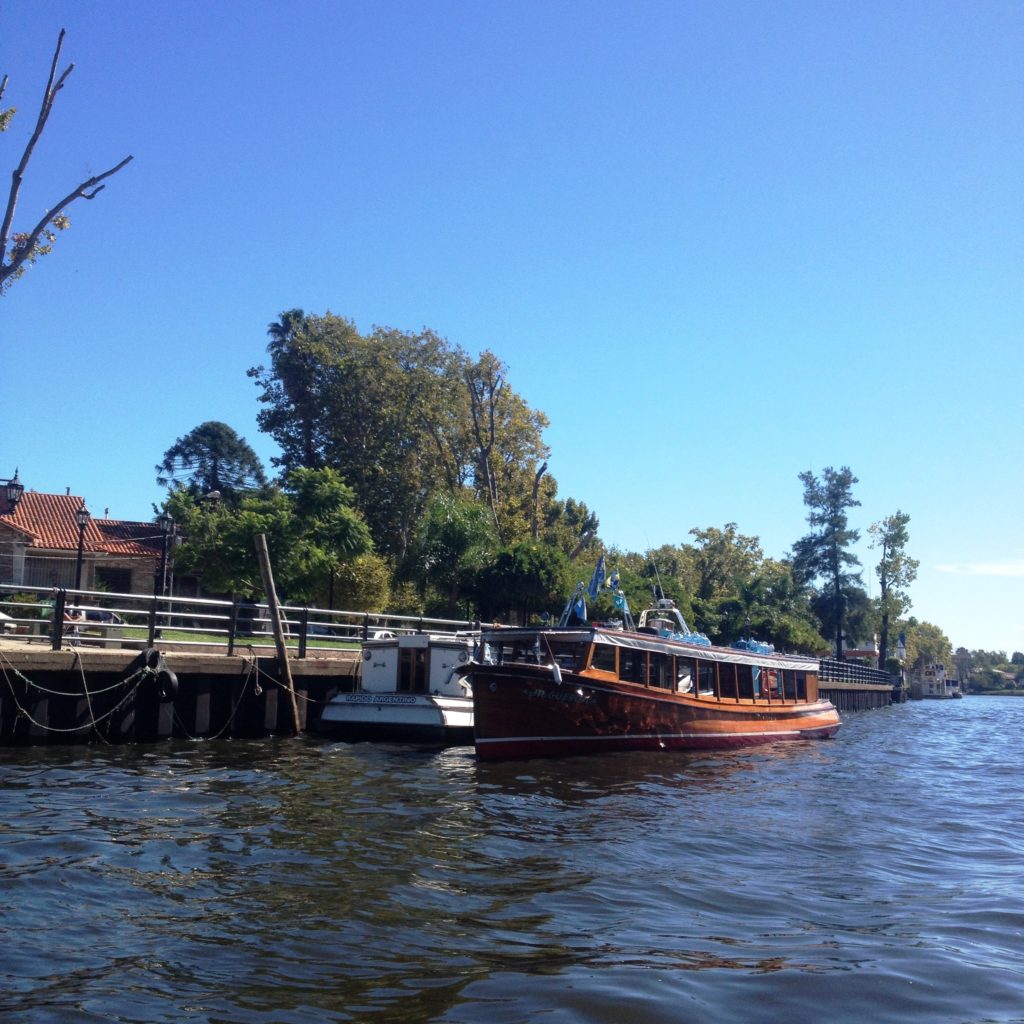 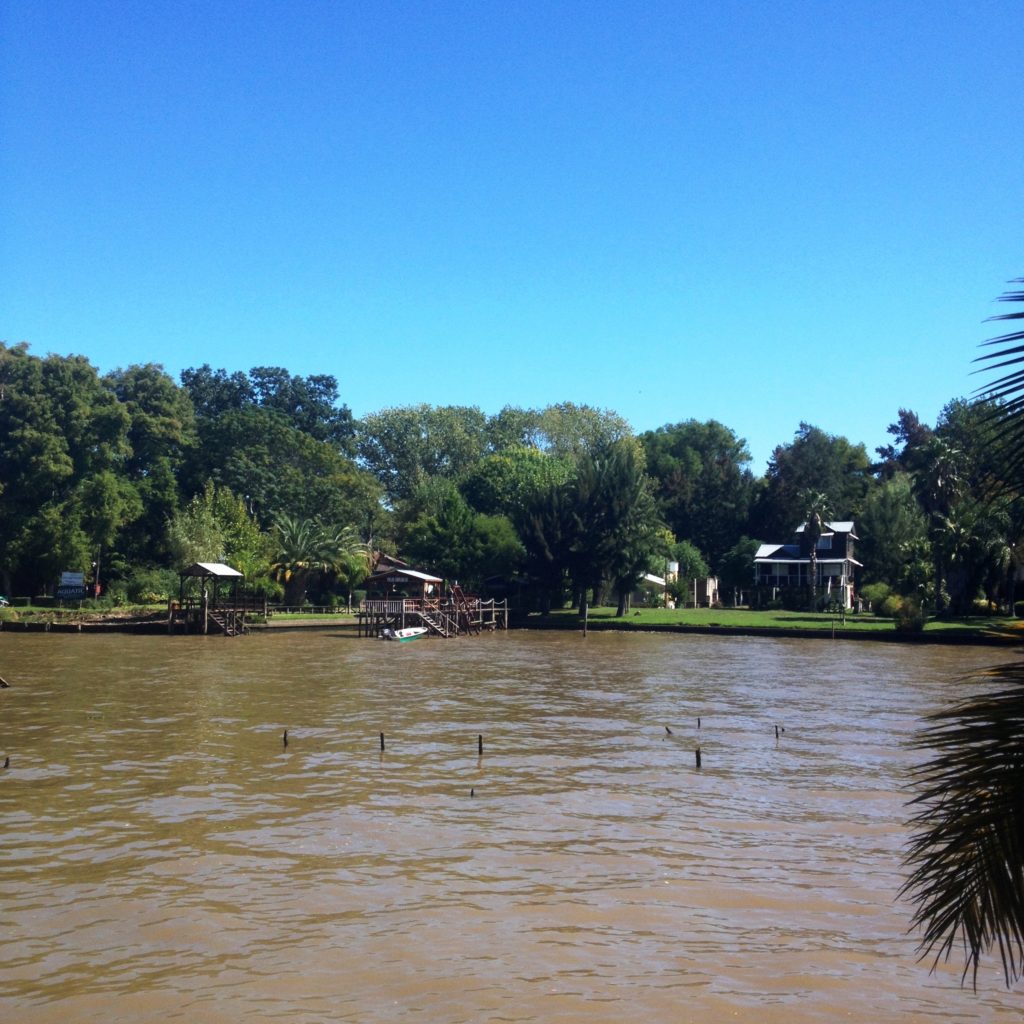 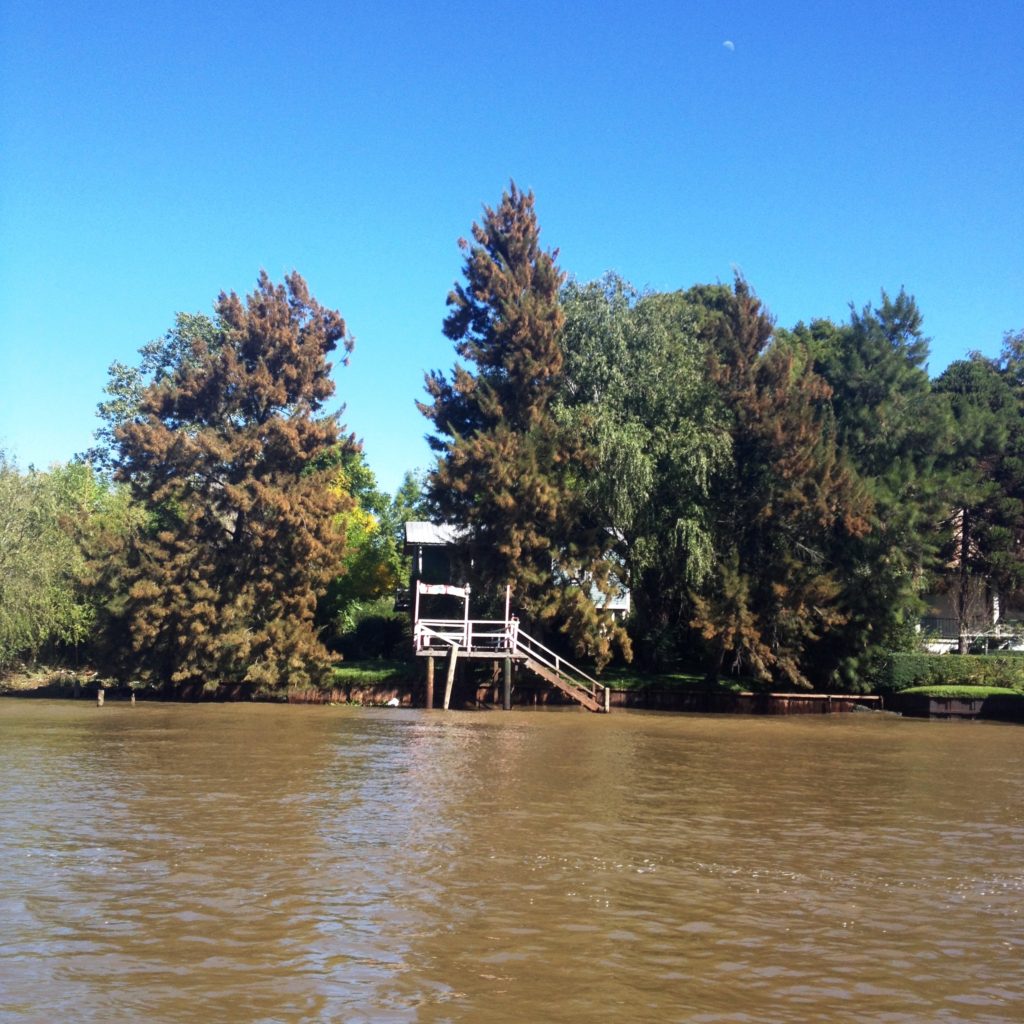 When arriving to Tres Bocas I took a photo of the map of the round hiking path I intended to take.

Very responsible, don’t you think so? I thought for sure this will help me see all the beautiful spots I wanted to visit. But as you can see below, the map is not too detailed. Getting to the first bridge, I and other five tourists that came here with the same boat, we already didn’t know if we have to go right or left. A local man came by and said we have to go right, so we all obeyed. We came to the restaurant my friends at the hostel mentioned, which is also the only one on the island. So this is your only chance to eat, drink and use the toilet. I tell you this because I didn’t know that at the beginning of my visit to Tres Bocas. Luckily, I had water and food with me, so I was covered. 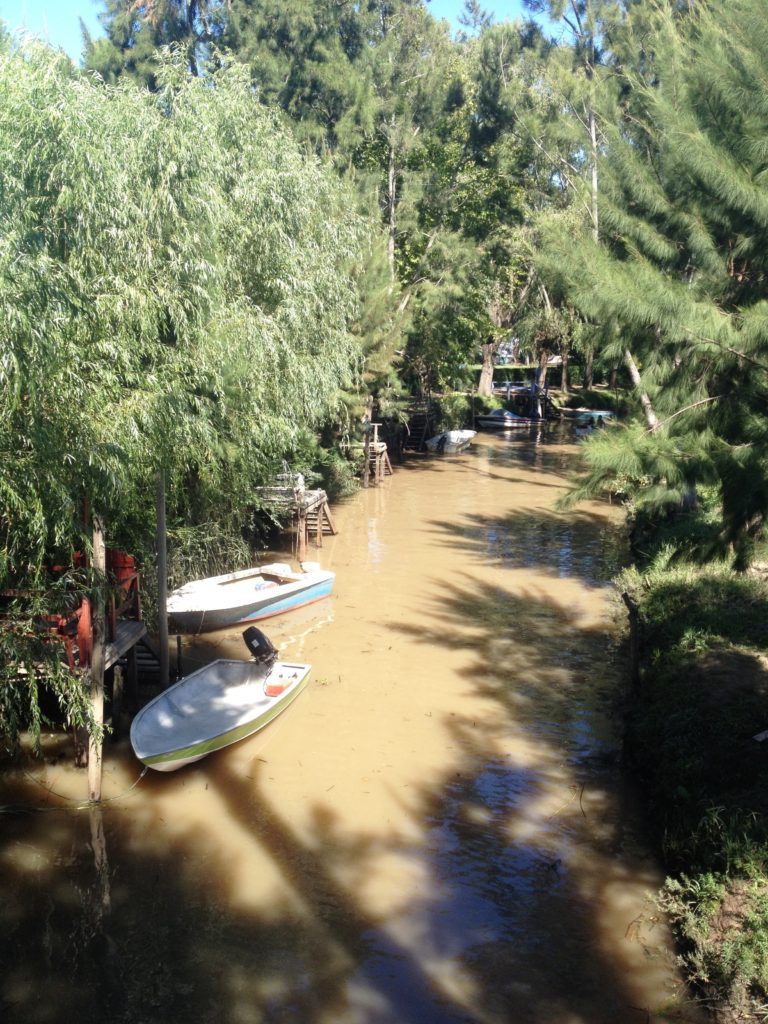 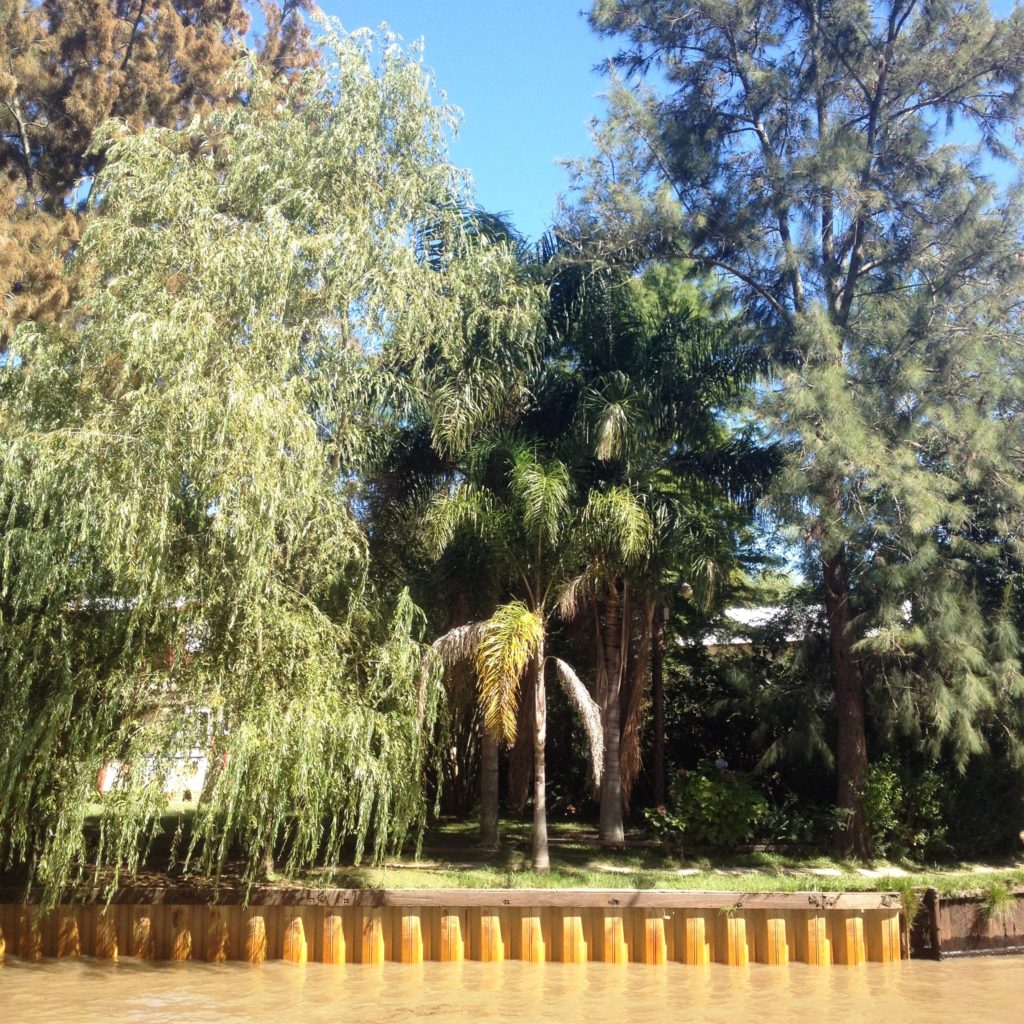 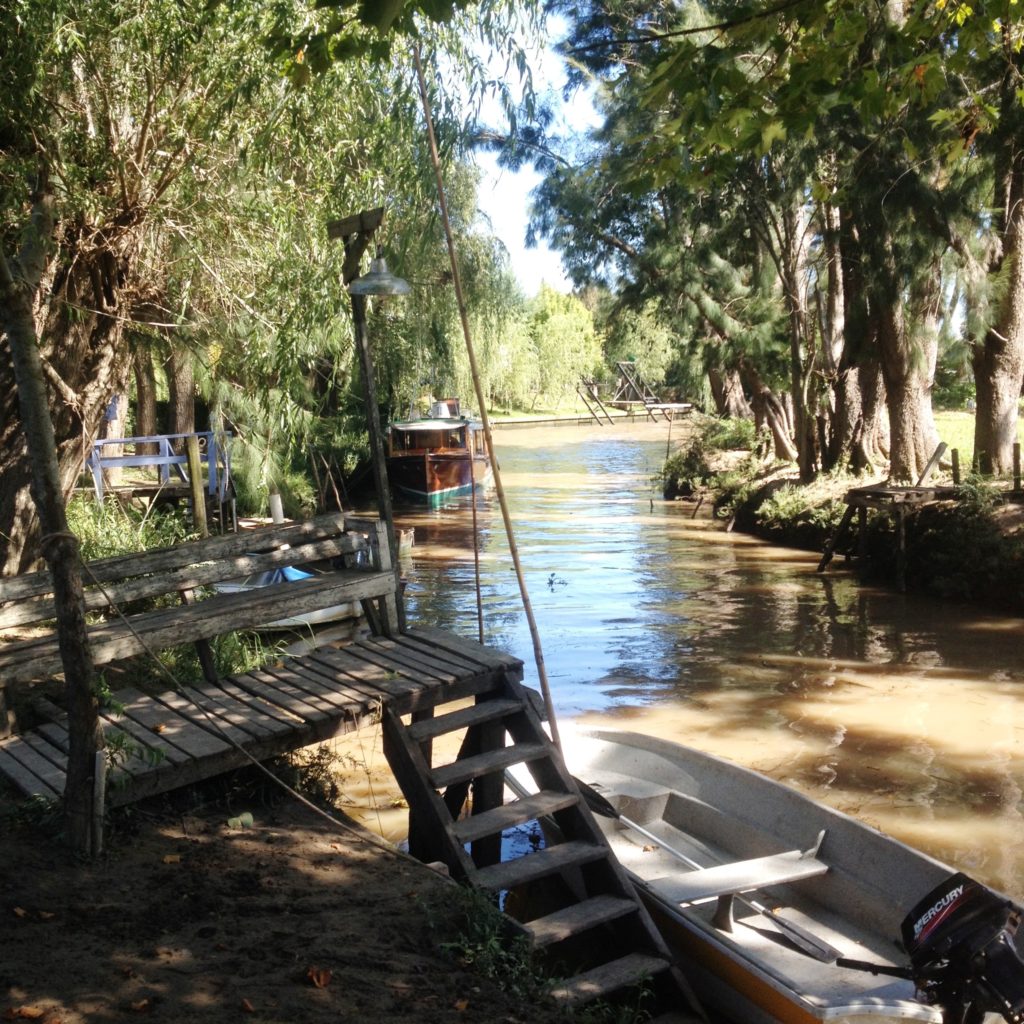 I continued my way past the restaurants, walking on a nice path beneath the trees, which was a welcomed change from a 30 degrees Celsius in Buenos Aires.

The wind was nicely blowing, I had to stop every two seconds to admire (and take photos of) the view of the Paraná River, lovely houses build on stakes, colourful quays and interesting plants. It was peaceful and quiet; you could hear the birds and I didn’t meet a single person. The path was partly paved partly not, so you had to mind your step. But it was beautiful, I was so lucky I went there and was enjoying ever moment.

Until I really had to go to the toilet and there was none on the horizon. Luckily, I met a local man and asked him at which part of Tres Bocas path I was and how long it is to the nearest toilet. That was the moment I found out that the only public toilet was at the restaurant I passed in the beginning. I also found out I was not on the Tres Bocas path at all! And continuing this path will not get me to my starting point. All I could do is turn around and go back to the start. Congratulations, I managed to get lost! And so did the other five tourists from my boat, because I met them all on my way back. I explained them we had the wrong path and we continued together to the boat stop. It was lovely to chat to an English and Italian couple and a French girl who was also travelling solo through Argentina. We all found out later, that if you pass the restaurant, you are not on the right way to do the round hike. 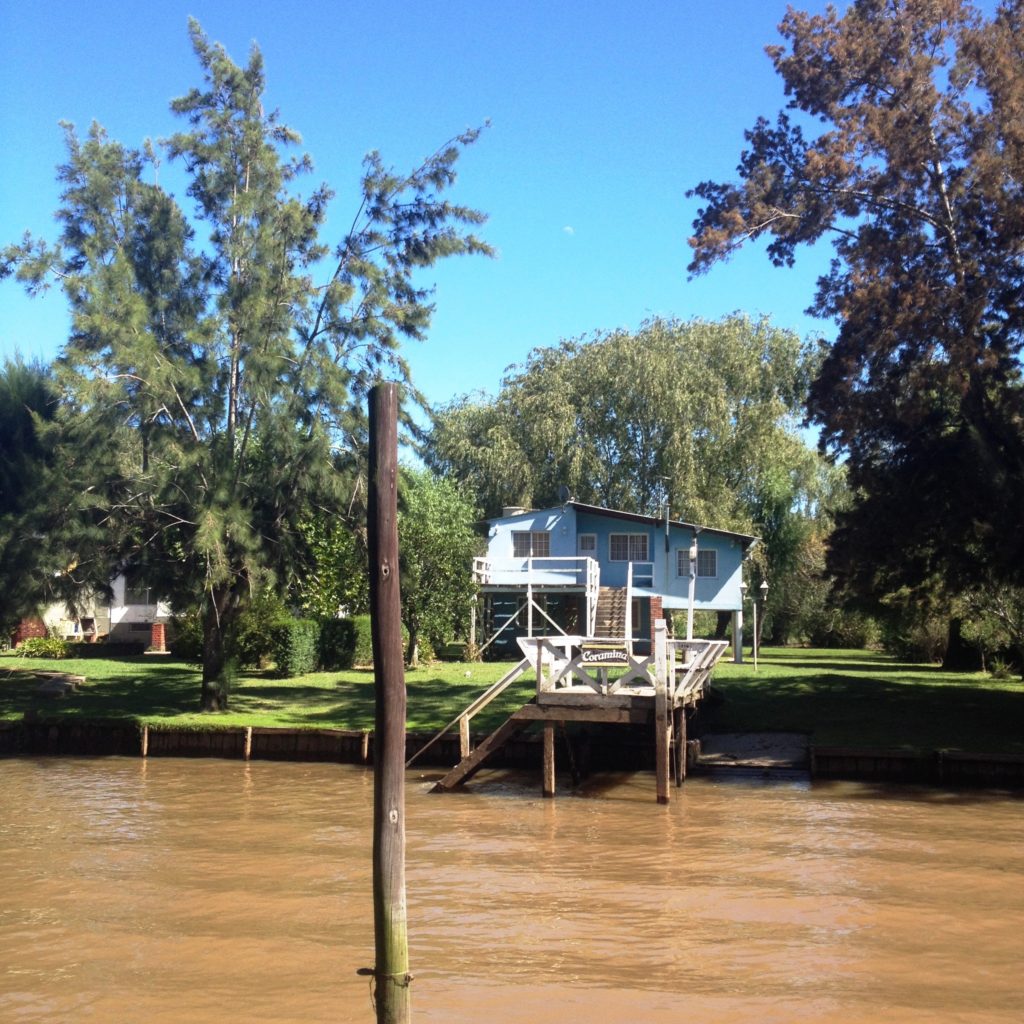 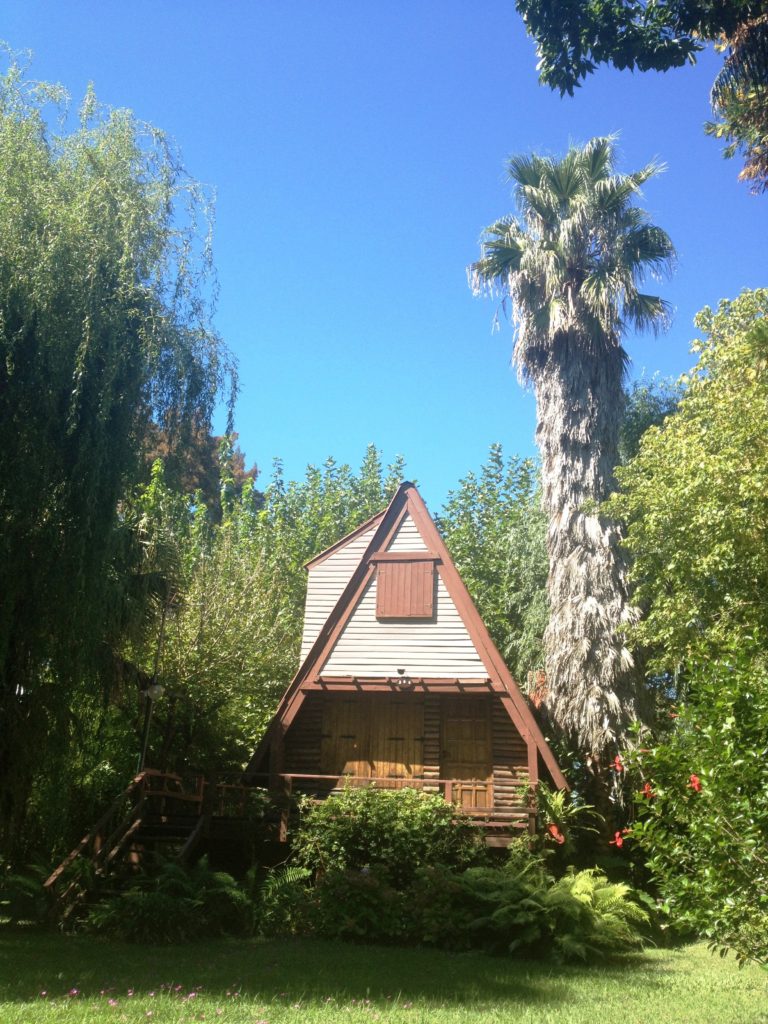 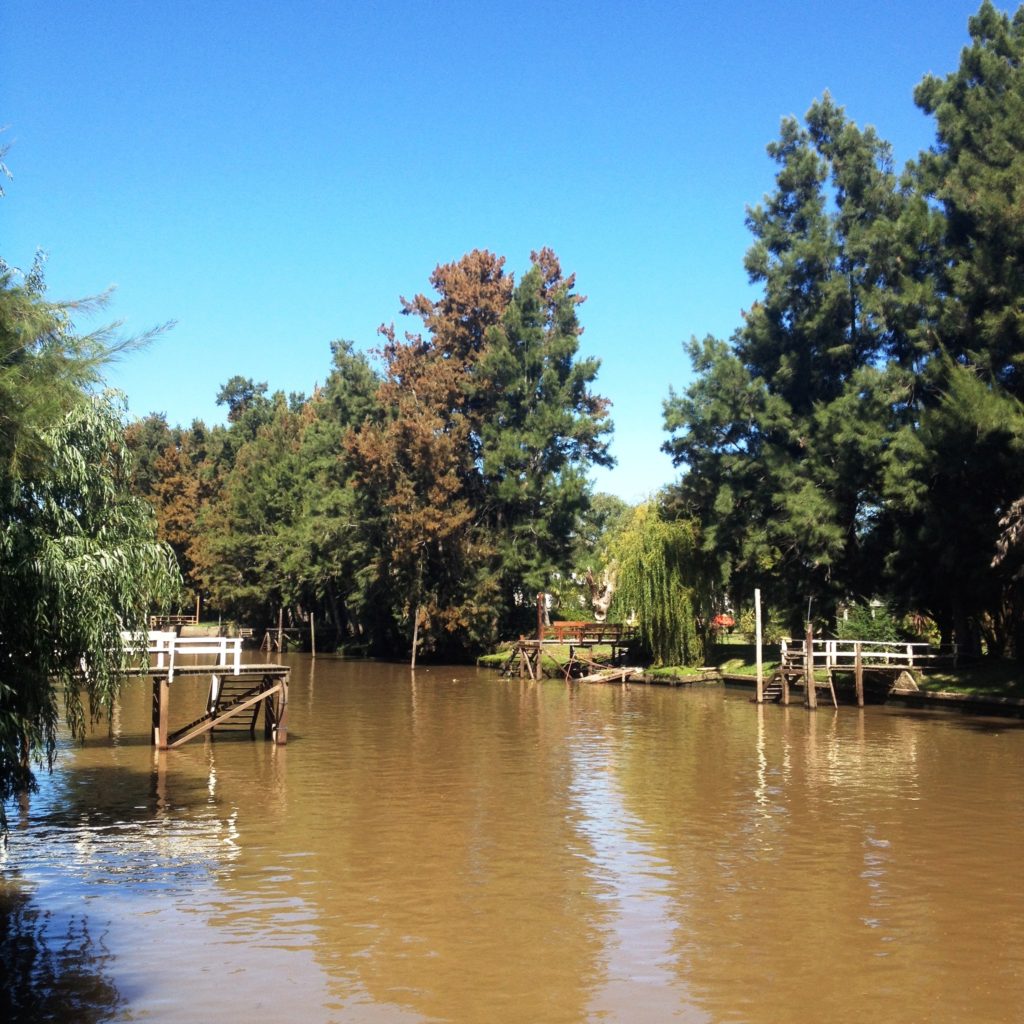 However, I didn’t want to give up and tried to go the other way around the Tres Bocas path.

The path was equally beautiful as the one I already walked. And although I was quite sure this time I had it right, the hour was getting late, so at one point I had to turn around and head back to embark the ship to El Tigre. We waited for more than an hour for the first boat bus to arrive, so it’s good to have enough time to get back to Buenos Aires. And you have to wave to the boat so they stop at your station. In the meantime there were a few school boats that stopped at our quay. What a nice way to get to school! 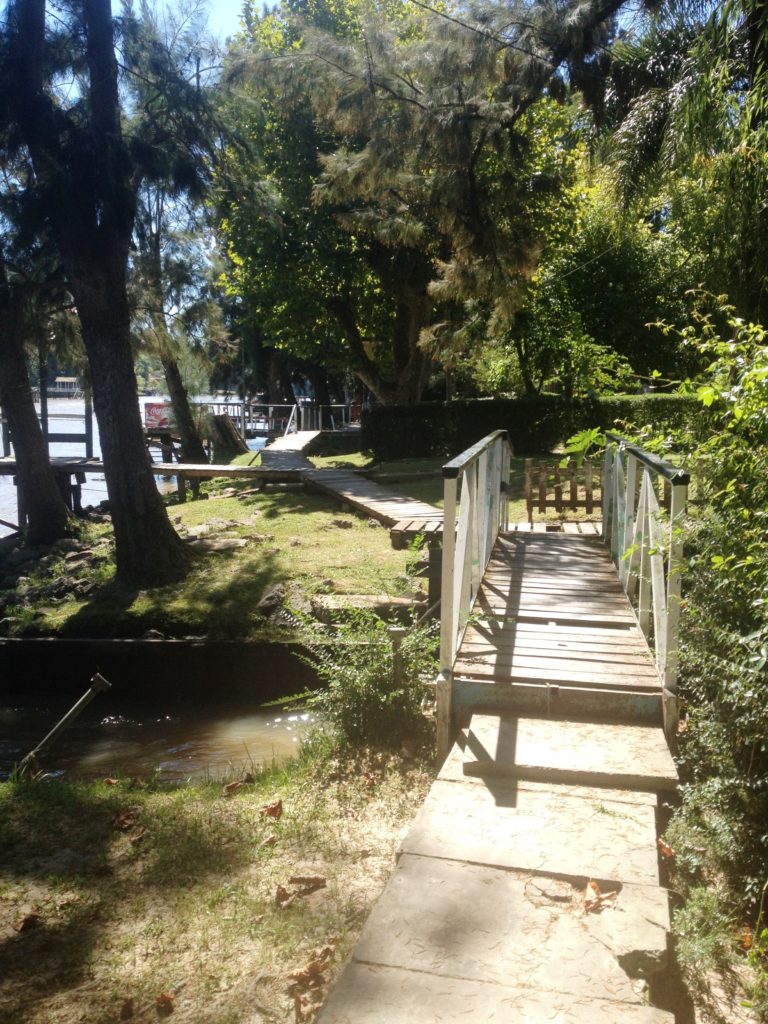 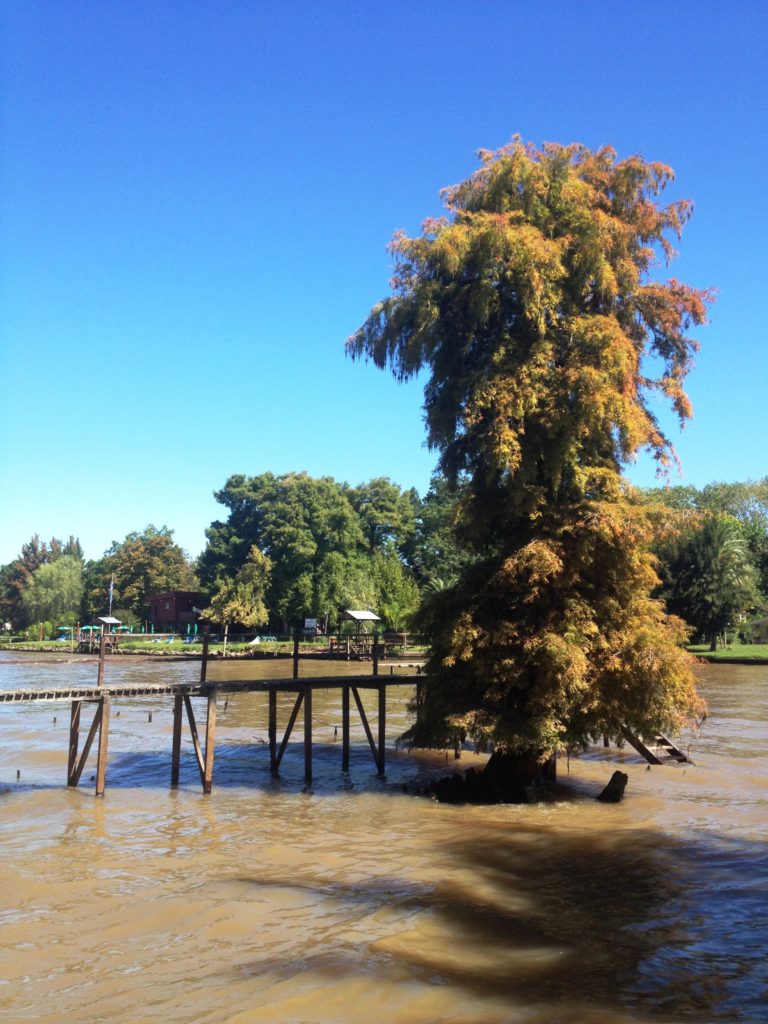 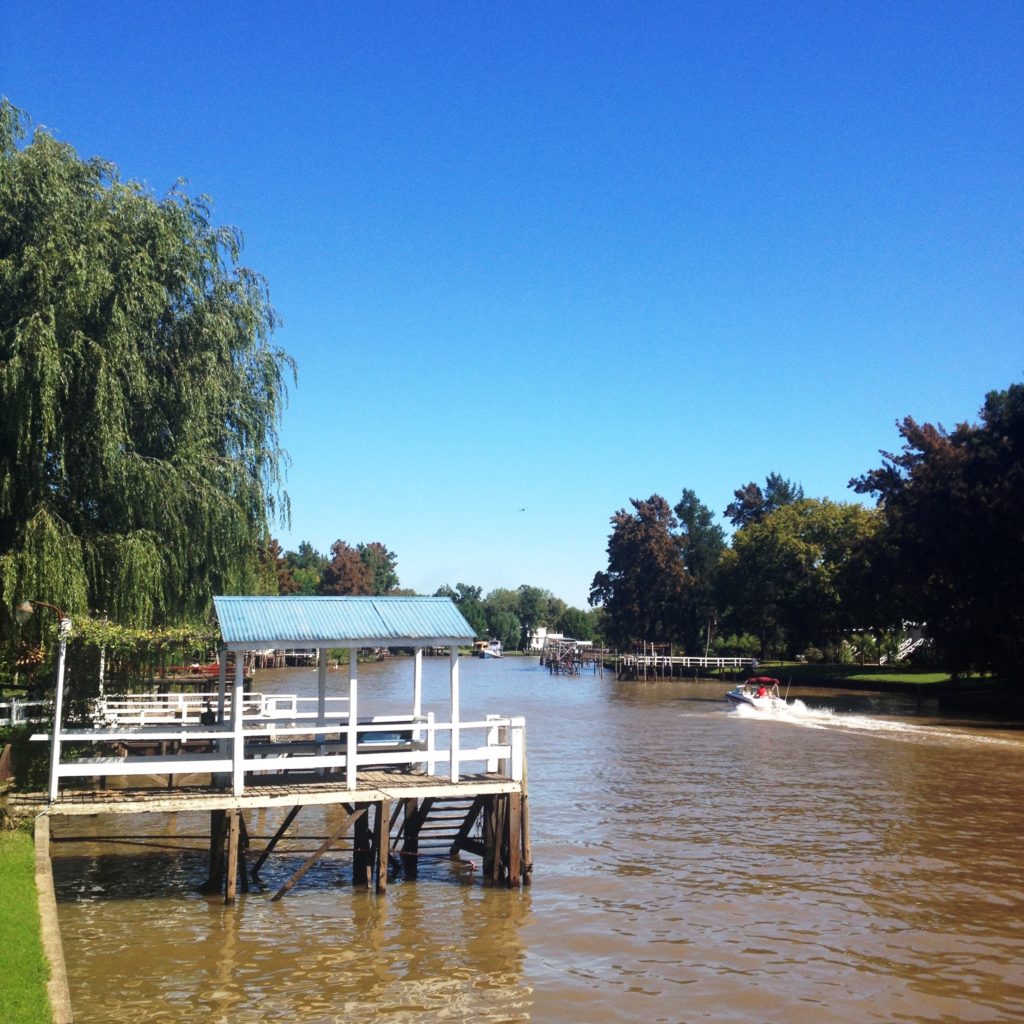 Before returning to Buenos Aires, I walked around El Tigre and went for a lunch at the Puerto de Frutos, an open market around the docks of the Delta with handcrafted products and food stands. And although I managed to get lost in Tres Bocas, it was a perfect day trip from Buenos Aires! 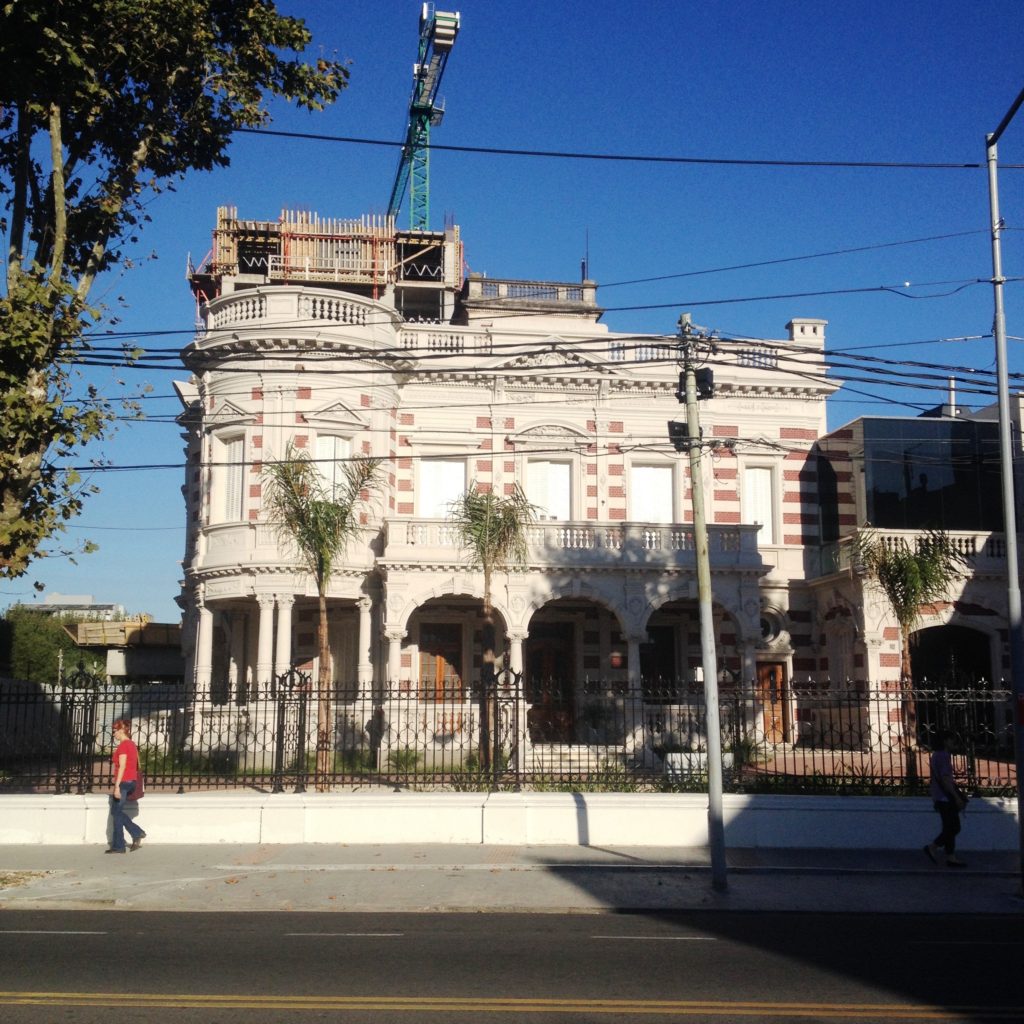 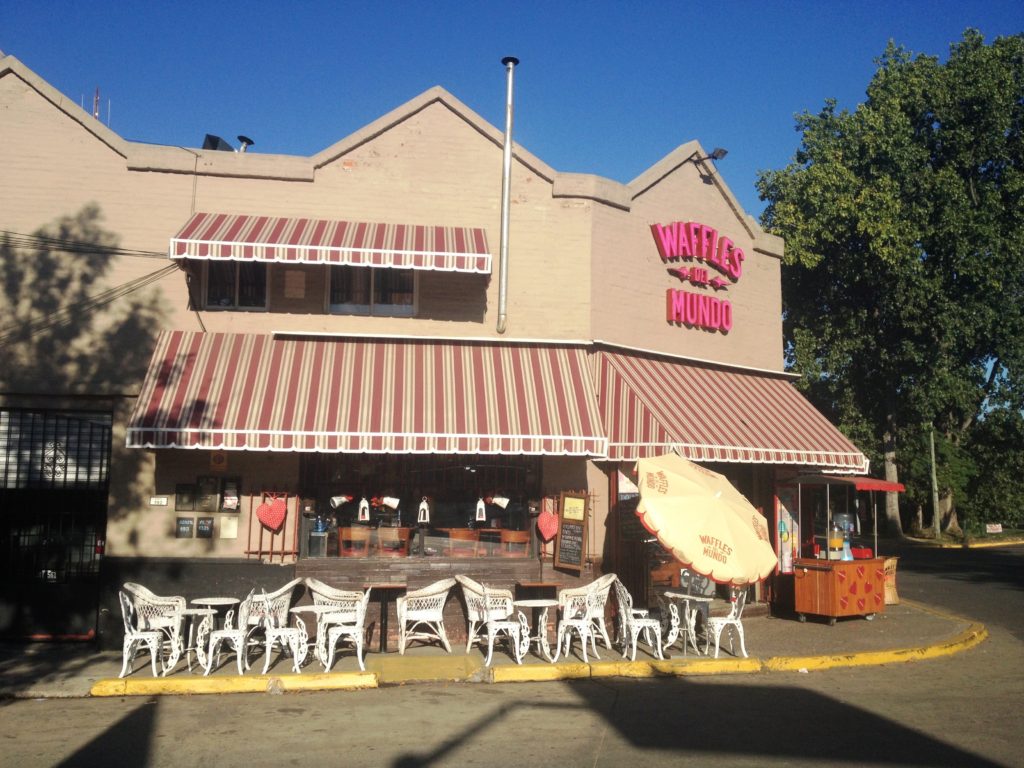 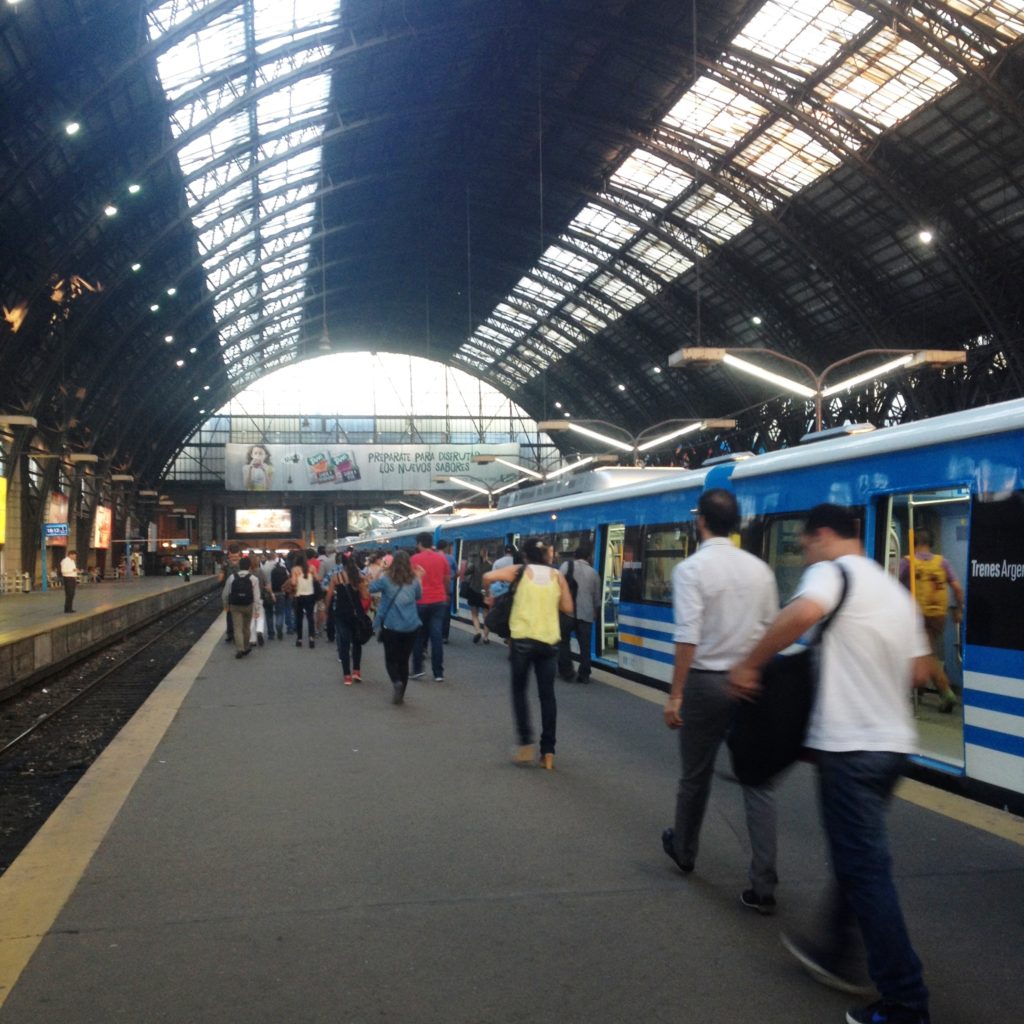